How much should workers under rural employment scheme be paid if minimum wage fixed by a state is more than that of the Centre? 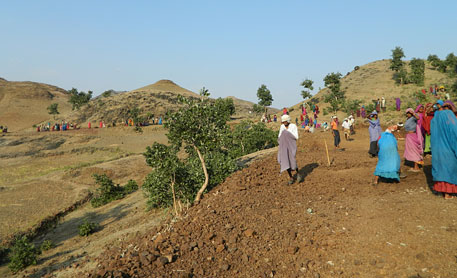 The Supreme Court has reiterated the Karnataka High Court order, directing the Centre to pay the minimum daily wage rate applicable in Karnataka to labourers employed in the state under the Mahatma Gandhi National Rural Employment Guarantee Scheme (MGNREGS). The Centre had fixed the wage rate for agricultural workers in Karnataka at Rs 82, as per a January 2009 notification; the high court held that the appropriate wage rate of Rs 119.42 should be paid. (Karnataka's minimum wage rate has since been revised to Rs 145 and MGNREGS wage to Rs 125.) The Union government appealed against the high court order in the Supreme Court.

The apex court, on January 23, said that till the case continues in the apex court, the Centre is required to pay the minimum wage to all MGNREGS workers in Karnataka from the date of the state high court order—September 23, 2011. The apex court, however, stayed the portion of the order which said the wages should be paid with retrospective effect from January 1, 2009.

In the appeal, the Union government claims it does not have enough money to pay Karnataka's minimum wage and back-pay and that the implementation of the high court ruling will set a precedent for other states to increase their minimum wages. The Centre says the  Karnataka high court order entails an additional expense of Rs 7,500 crore.

The apex court order seems to have vindicated those who have been opposing filing an appeal against the high court order. In a letter to the prime minister in December 2011, rural development minister Jairam Ramesh reportedly put on record his apprehensions on opposing the high court ruling. An appeal would be “exploitative” and “insensitive”, said National Advisory Council (NAC) member Aruna Roy in her letter to the prime minister, requesting him not to file such an appeal.

George Mathew, director of Institute of Social Sciences says there is a minimum wage enactment in every state and at the national level as well. By going against that the government is violating the law. This is a very important enactment and legally binding on all employees. This appeal along with the 2009 notification is “atrocious and criminal” he says.

The apex court's interim order is encouraging, says Biraj Patnaik, principal adviser to the Office of the Food Commissioners to the Supreme Court. The government claim that it does not have funds is incorrect and not applicable in this case, he adds. Patnaik goes on to explain that MGNREGS is a demand-driven programme and therefore the government is required to increase the allotted money if the demand exceeds the allocated amount of money.

Nikhil Dey of Mazdoor Kisan Sangathan says " the financial implications of the government linking MGNREGS to minimum wages are being exaggerated. The Supreme Court order as of now only specifically applies to Karnataka and from the date of the judgement. What's more, the NREGS wage was to have been revised on January 1 this year in light of indexing to the consumer price index of agricultural labour. So the difference in wage rate is likely to be nominal. The number of states that will now have a higher minimum wage than the indexed NREGA wage rate is likely to be only four or five, and the amount of excess money required is likely to be no more than Rs 1,500 crore for the year.

He explains that the arrears which the government is projecting at Rs 7,500 crore has been stayed. This seems like a big figure but is actually the arrears for three years, so it should be seen as arrears of approximately 2,500 crore a year. Given that the annual expenditure on this scheme is about Rs 35,000-Rs 40,000 crore, it becomes clear that the amount is not that high. “The claim by the government that it is unable to budget the extra expenditure is untenable as there have been unspent balances of about 25 per cent of the money available for NREGA, every year," says Dey.

The Centre's claim that that states would arbitrarily increase minimum wage is baseless, he adds. This is because: a) the states would then be required to pay more to the people it employs directly; b) There is a huge counter lobby to the minimum wage comprising of groups such as rich landlords, contractors, and industrialists who are objecting to increases in minimum wages; c) there is no evidence to show such sustained and arbitrary increases since the inception of the scheme.

Will the Supreme Court order have any impact on other states? NAC member Harsh Mander says if the government is afraid of arbitrary increase of minimum wage by the states it can make provision in the existing laws. Aruna Roy mentions in her letter that the centre can notify MGNREGS wages to be brought under the national list through the minimum wages Act. This move would bring MGNREGS wages under the Centre's ambit without a conflict with the state minimum wage and would also not require an amendment in the rural employment scheme.

It's more than a wage programme

Professor Narendra Pani of the National Institute of Advanced studies says the wage debate takes away from the core concern surrounding the rural employment guarantee scheme. He explains that this case just highlights the two differing perceptions of MGNREGS—as a safety net and a social welfare scheme and as an employment initiative to improve rural infrastructure and assets. “The battle should not be about the wages, instead it should be about the approach to the scheme. If it were treated as an employment initiative, then perhaps more focus would be on the quality of assets and work done.” He adds the scheme is the best way to help us out of the current agrarian crisis. Pani was member of the committee formed to suggest MGNREGS reforms.