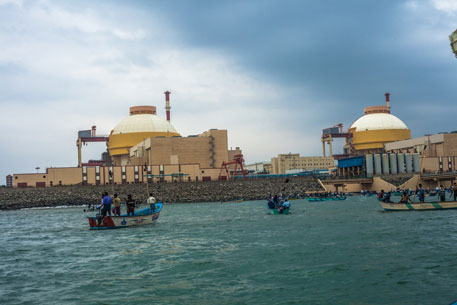 A week after the Madras High Court questioned the heat tolerance limit for effluent discharge from Kudankulam Nuclear Power Project (KNPP), the Tamil Nadu Pollution Control Board (TNPCB) has changed its stand.

In a fresh consent order filed in the high court on August 29, the board has revised the heat tolerance limit for effluent discharge into the sea to a maximum of 7°C above the ambient temperature. In the earlier consent order to operate the nuclear plant, the TNPCB had allowed the 45°C as the heat tolerance limit for the discharge. But this was challenged in the high court by software professional G Sundararajan, based in Chennai.

He had contended that the order was against the norms set by Union Ministry of Environment and Forests for nuclear power plants. As per the norms, maximum of 7°C rise beyond the ambient temperature of 29°C is permissible. Higher temperature could lead to rise in temperature at the discharge point in the sea and affect marine life. Following this, the court had asked TNPCB to submit a fresh consent order in its hearing on August 23.

Was the board wrong in giving consent to the plant earlier? “It was a serious folly on part of the state pollution control board. Had the petition not been filed, the project proponents would have continued with the project. There is ample documented evidence which says that 45oC temperature would have harmed marine life,” says Karuna Raina, campaigner on nuclear power issues with Greenpeace India, a non-profit.

No official of the TNPCB was available for comments because of a state holiday on the occasion of Onam. Next hearing of the case is on August 31.