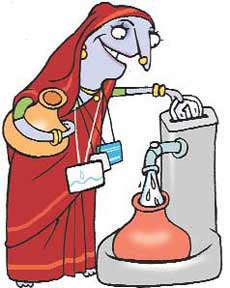 people living in Hubli have one more identity card now in addition to voter cards, pan cards and other cards. The water supply board is issuing tap cards to residents of the Karnataka city to ensure they pay water bills on time. The cards were introduced in the first week of March to improve revenue collections.

"Over 40,000 consumers, out of the total 65,000, have been issued tap cards," said Jayaramu KP, executive engineer with Karnataka Urban Water Supply and Sewerage Board (kuwsb). Pink tap cards are being issued to commercial and industrial establishments and white cards to households. The tap cards have details of the customers, size of connection and ward. They are bar coded. This will help consumers pay for the water they use even if they do not receive their bills.

They can show their cards at any of the four special computerized counters of the water board offices to get details of their bills and arrears, said Jayaramu. The scheme follows a survey conducted by kuwsb in Hubli and its twin city, Dharwad, early this year. It was found that a large number of customers were not paying their dues as they did not receive bills or received incorrect bills. As a result, the annual revenue deficit was Rs 12.75 crore.

Tap cards have been opposed by the coalition of non-profits and activists who are campaigning against privatization of water in Karnataka. They said the cards are linked to 24/7 water supply scheme that aims to privatize water supply in Hubli and Dharwad (see 'Water for Profit', Down To Earth, February 15, 2009).

"People who do not pay their bills after getting tap cards will not get water as their supply lines will be cut off," said Kshitij Urs, an activist who authored Resisting Reforms: Water Experiments in Bangalore. He said the tap cards have to be seen in the larger context of turning water into a commodity. He pointed out the special centres are just bill collection centres and not grievance redress centres meant to improve public services.

Srinivas Ramakrishna, a resident, said the card will not help improve supply in his locality, Bylapanagar, which gets water only thrice a week. "The tap card is just an identity card," he said.

Jayaramu denied the cards are linked to 24/7 project being implemented by French water services company, Veolia. "It is a part of the drive to improve revenue," he said.

Vinay Baindur, another activist said ever since 24/7 pilot project was introduced in Hubli, water tariff rates have increased. Slabwise increase in water charges in the project area, led to steep increase in water bills. About 600 complaints were received. The smart cards take care of this problem and will ensure "steady revenue flow for the private operator", Baindur said.

Dharwad residents will start getting their tap cards from May, said S B Siddanayak, the water board executive engineer in charge of the city.