The future of the Tawa Matsya Sangh (tms), a cooperative of fisherfolk operating in the Tawa reservoir in Madhya Pradesh's Hoshangabad district, is firmly on hold. On December 23, 2006, their licence to fish in the reservoir expired, and since then all hell has broken loose. The reservoir was created when a dam was built on the river Tawa, a tributary of the Narmada river, in 1974. tms, comprising tribals the dam had displaced, was formed as a platform demanding their right to fish in the reservoir; tms has managed fishing there since 1996.

Despite the expiry of the licence, and non-renewal, tms fisherfolk continued to fish in the reservoir. In early January, 2007, the forest department at Sakhota Naka intercepted two tms motorboats and 60 kg of fish. "When we approached the forest ranger, he asked for Rs 5,000 as penalty.We said we don't have that much money; instead, 5,000 fisherfolks can sit on dharna here," says Guliabai, a tms leader, of Kesla village. "On January 25, 2007, thousands gathered in protest. Republic Day witnessed a flag-hosting ceremony and we asked for our boats back." Then women commandeered two boats of the forest department at Sakhota Naka, and another two at Tekapar. A police complaint was lodged against them, and when a posse turned up, tribals captured two police jeeps. A police force surrounded villages but the fisherfolk continued with the dharna, at Daudi village, and did not return the boats. The police force had to retreat, and the forest department gave up. They returned the boats on the night of January 28, 2007; fisherfolk reciprocated two days later. "The forest department also took our fishing nets when they captured the Sangh's boats," says Maniram Dhurve, of Manna village. "They have not returned these. Neither do they allow us to fish. The net cost Rs 300 a kg. Mine weighed 8 kg. My brother is physically challenged. We don't have help."

Dhurve's distress is not symptomatic of tms. The latter, often touted as a model fishery regime, approached the Central Empowered Committee (cec, a body the Supreme Court set up to advise it on forest-related matters) on February 2, 2007, to seek relief and the right to fish. A hearing was held on February 8, 2007.
tms is caught in a regulatory pincer. On the one hand, there is the Madhya Pradesh Matsya Mahasangh (MPMM), the state's nodal fishery body, which shows no signs of renewing tms's licence. The agency, responsible for granting inland fishing rights statewide, is itself eyeing the resource-rich reservoir. tms fears if the nodal body wins the case, it may restrain tms from a bid, despite the co-operative's huge success in the last 10 years. "On December 14, 2006, we approached the Supreme Court for fishing rights in the reservoir. The matter is sub-judice, so I can't comment much on the performance of tms. Extending fishing rights to tms is not in my hands, it is up to the government to give them the rights after the Supreme Court passes judgment," says Kanchan Jain, managing director, mpmm.

On the other hand, there is the matter of the forest department's jurisdiction over the reservoir, via the Wildlife (Protection) Act 1972. Over time, various areas around the reservoir were declared protected (see timeline Build-up to conflict); then came a proposal to carve, out of these protected areas, the Satpura Tiger Reserve.

The process began, to be subsequently overlaid by regulatory injunctions and the reservoir is now entangled in a judicial net.

The first of these is a February 14, 2000, interim order the Supreme Court passed in the omnibus 'forest case' (Godhavarman vs Union of India), banning removal of dead, diseased, dying or wind-fallen trees, driftwood and grasses--literally anything construed as a natural resource--from all protected areas. Then, on July 2, 2004, cec asked state governments to strictly implement this order.

The forest department claims it has warned tms to approach the apex court on lease renewal. Seven months before lease expiry, on 20 May, 2006, it issued a circular banning fishing in the Satpura Tiger Reserve. The circular is a regulatory tour de force. It cites order number 15-12-80-10/2 dated October 13, 1981, by which all Denwa river catchments, north of Bori Sanctuary, and all Tawa river catchments become parts of the proposed tiger reserve. It cites relevant sections of the Wildlife (Protection) Act, 1972, where fish are treated as wildlife, so that fishing in a protected area is illegal. It cites the Supreme Court interim order, and the cec directive. The circular also cites a forest department order dated September 8, 2004, stating fishing is banned under the Wildlife (Protection) Act, 1972, in reservoirs built in the Narmada basin.

Slammed by law, about 64 villages (16 in Bori Sanctuary, 40 in Pachmari National Park and eight in Satpura National Park) face relocation for conservation efforts in the proposed tiger reserve. Tribals contest this latest round of displacement. In 1974, when the Tawa dam was built, about 44 tribal villages comprising 3,000 families were displaced. Two years later, 25 villages were displaced by the Army Proof Range Establishment. An ordnance factory in the region displaced nine villages. Moreover, explains Sunil, advisor to tms, "The land rights of tribals have not been settled in the Bori sanctuary. Section 66 (4) of the Wildlife (Protection) Act, 1972, which was amended in 1991, says that if a sanctuary was created before 1991 without any settlement of rights, then the rights need not be settled. First, Britishers who took over and created Pachmari did not settle any rights. Now the government after 150 years is also doing the same. This is a historic injustice with local people."


The case to create the Satpura Tiger Reserve, contends Sunil, contains legal contradictions. Clause 6 of section 35 of the Wildlife (Protection) Act, 1972, as amended in 2003, disallows anybody from diverting, stopping or enhancing the flow of water into or outside the national park, except when permitted by the chief wildlife warden. But, argues Sunil, "Water is taken out from the reservoir by two canals--one in Tekapar and another in Tawa nagar." He also contends the reserve is merely proposed, it is not a finally declared forest reserve; so, the February 14, 2000 interim order of the apex court does not hold good here. But H S Pabla, additional principal chief conservator of forests, Madhya Pradesh, refutes these contentions. "There is no alteration of flow of water since the Tawa dam came into existence. So, it does not violate the Wildlife (Protection) Act, 1972, or its amendments till now. But if there would be any violation of the rules, we will surely take cognisance of it."

What renders the situation more piquant is that there are other precedents of activities allowed inside protected areas (see box Why not fishing?)


Villagers are also furious over a concomitant ban on draw-down agriculture (farming on land that emerges when the reservoir's water level falls), which they have sustained for years.

Conflicts also exist between tribal and non-tribal fishing communities. The Kahar, of the Dhimar caste, are fisherfolk. They have been fishing in the area even before the Tawa dam was built. In 1996, they, too, formed 30 co-operatives. But, says Kishanlal Rekwar, president, Kewat Matsyodhog Sahkari Samiti, Sukhtawa, "We had to poach to survive, since only tms had the lease. In the first two years they bought fish from us, but later on they started beating us every time they caught us with fish. They have lodged police complaints against us. They accused us of catching small fish whereas we catch only those small fish which remain small naturally." He adds "Now that their lease had expired we plead with the authorities that we should also be allowed to fish in the reservoir. We only have problems with tms, not with the tribals. Our draw-down agriculture land should also be returned as we do not have employment and our women work in others' homes." Poaching still happens. tms catches poachers even after their lease has expired. "First we allowed them to fish in the reservoir and they were selling fish to the sangh. But then they started using pesticide and catching small fish. They started poaching. We had to lodge complaints against them," says Sabbulal Gond, chairperson, tms.

The Kahar fisherfolk in Sukhtawa village do not face displacement, as their village is outside the tiger reserve area. But those living at the periphery of the reservoir, do. These villagers are now ploughing the rabi crop, sowing wheat and gram on the draw-down land. But they fear they may lose their agriculture, their only livelihood after fishing. "At least 30,000 people from 16 villages in our area are involved in draw-down agriculture. The forest ranger tells us that we have to leave this land," says Imrat Lal Gond. "We do not want to go. They want us to complain that there are no doctor and facilities in the jungle. They incite us to settle down in cities, offer us land." The administration says it would be good for both tribals and wildlife if the former moved out of the reserve forest. "We are giving them two hectares of land and Rs 1 lakh in cash. We have proposed to the government to hike compensation to Rs 2 lakh. Besides, other existing government schemes will also be in place," claims Faiz Ahmed Kidwai, collector, Hoshangabad, and honorary director of tms for five years.

He admits a recent escalation in conflicts. "Earlier, everything was cool. We have recovered some general Naxal literature from locals and a report to this effect has been sent to the government," he adds. Also, explains Sunil, who is also a member of the Kisan Adivasi Sangathan, the body that first organised tribals to demand fishing rights in the 1990s, and has now formed a political front called the Samajwadi Jan Parishad (SJP) "The problems have cropped up because some local political interests closely associated with the government do not like the work of the federation and they do not wish that we get a lease for fishing again." Sunil says that on January 1, 2004, the then district magistrate of Hoshangabad had decided to keep the reservoir out of the tiger reserve area. But the forest department objected, and the government suspended the order. Had it stood, a big human problem could have been solved.


After mpmm moved the Supreme Court on December 14, 2006, for fishing rights in Tawa reservoir, the court referred the matter to cec and the Union ministry of environment and forests. 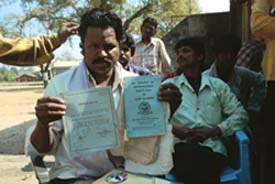 tms also moved an application to cec on February 2, 2007, to demand fishing rights. Both parties were called by cec for a hearing on February 8, 2007.

According to Rakesh Shukla, tms advocate, cec has decided to visit Tawa soon. During the hearing, cec wanted to be convinced if the mpmm would extend fishing rights to tms and to those displaced by the Tawa dam. mpmm said they would hold the fishing rights to decide how to extend them to all displaced people. As per mpmm, tms does not fully represent the displaced people. tms contended they by and large represented displaced tribals, in the form of about 40 primary societies that did the actual fishing. They further pleaded that the fishing rights extended to them were part of the rehabilitation package. cec also wanted to seek the views of the forest department and the chief wildlife warden about the part of the reservoir that falls in the reserve forest.

According to Shukla, tms is sustainable. "Eighty-five per cent of the benefit goes to fisherfolk. There are no contractor and middlemen. The process is controlled and managed by the tribals," he says. Whether they will do so in future remains an extremely open question.