Tension over relocation at Melghat sanctuary 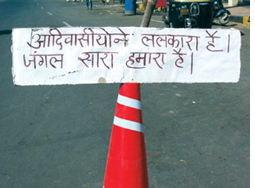 there is tension brewing in three villages in Maharashtra's Melghat Sanctuary over rehabilitation measures. The sanctuary, within the Melghat Tiger Reserve, is being freed of people to protect forests and to check declining tiger population. There is a debate over the rehabilitation package with ngos claiming it does not follow procedures and forest officials denying the allegations. The impetus for relocating the three villages--Churni, Pastalai and Vairath--came after a government resolution in May 2007 necessitated the expedition of relocating over 87 villages situated inside critical areas of various sanctuaries in Maharashtra.

"The villagers don't want relocation but the state government is forcing them to move out. Villagers have been forced to sign relocation papers," says Sanjay Ingle, president of People's Rural Education Movement, an ngo.But officials say they have villagers' consent for relocation. "There has been a lot of progress in rehabilitation measures. Plots have been issued to some families. Shifting will begin around October because of some encroachment problems in the new area. We are working towards finding a solution," says an official from the tiger reserve.

ngos disagree and term the assurances white lies. They say the rehabilitation measures do not provide families with 'house-for-house' and 'land-for-land', as should be done. "The landless should be given 1 hectare. Plot allocation is not uniform and land allocated to villagers of Vairath is in a river," says Ingle. There are apprehensions on how Churni and Vairath's Gawli community--traditionally, cattle rearers--will take to cultivation. Earlier examples show how, when in 2000 three other villages were relocated, the villagers faced an acute fodder crisis (see 'Melghat Malaise', Down To Earth, July 31, 2005).

Forest officials admit relocation is no cakewalk because the relocation site falls under degraded forestland category. According to a Supreme Court order, diverting forestland for non-forest purposes requires payment of a net present value (npv). "Rehabilitation work was stuck for long because of an exorbitant npv. But now the court has exempted projects from this clause till further orders. Hence, we are relocating these three villages," says an official.