"The collapse of Globalism and the reinvention of the world" 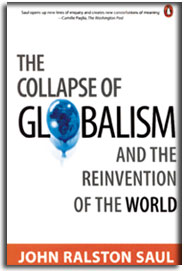 The Collapse of Globalism and the Reinvention of The World by John Ralston Saul Penguin, New Delhi 2005

The idea that economics and trade will blur -- and ultimately efface -- national boundaries is there with us. But we also live in an increasingly fractious world. The supercilious prophecy of Milton Friedman and his Chicago school -- also Fredrik Hayek and the Austrian school -- that economics will become the religion of the world remains unfulfilled. In 2002, ex-chief economist at the World Bank -- and the 2001 Nobel economics prizewinner -- Joseph E Stiglitz analysed this failure in Globalization and its Discontents . The book was a stinging indictment of the policies of the International Monetary Fund (imf), World Trade Organization and World Bank by an economist who had a ringside view of the framing of the Washington Consensus on free markets. Stiglitz saw the hand of imf in East Asia's financial crises, Russia's failed conversion to a market economy, failed development in sub-Saharan Africa and financial meltdown in Latin America. Loans came with conditions that subverted democracy, hampered local economic growth, and enriched multinational corporations.

The failure of the global market place -- if ever there was any -- is also the concern of this book under review. Its author John Ralston Saul is, however, no economist. He is a historian and a philosopher, and his training is palpable in every chapter of Collapse of Globalism and the Reinvention of the World. This book will find no takers in India's Silicon Valley or in its outsourcing industry -- that is if anyone there cares to read it. But that would be to their loss. Bangalore would do well to take note of Saul's critic of technological determinism. Conflating technology with Modernism is as flawed as it gets. But unfortunately, the Goblessian pronouncements of the 'messiahs of information age' have many takers today.

Stiglitz had cautioned against such pronouncements. Without equal access to information between employer and employee, company and consumer the lender and debtor, there is absolutely no chance of free markets operating fairly, he had pointed out. Saul also turns to the subject. Drawing on the work of Lawrence Lessig, the leading activist and theorist of modern day communication systems, he shows how moves to dominate the Internet are manifestation of an absolutist quest to control information and communication that stretches back through empires and religion. It's also the technocrat's fancy. That this often assumes the guise of modernist sophistication says a lot on the technocrat's leadership acumen.

"Technological progress" is also a crutch for multinational corporations. And, slavish pursuit of technology lays grounds for domination of these corporations. It does not -- and in fact hasn't -- foster freedom as the Chicago School or the Austrian School of Economics would have us believe. It hasn't flattened the world, as the other Friedman, Thomas, would have us believe.

Democracy is the expression of modern nation states: an expression of the power of citizens to engage in national choices. Replace the nation with the multinational corporation, you cannot help but undermine democracy. This is a point Saul makes quite forcefully; it has been made by several others including Mike Davis in his recent book, Planet of Slums (London, 2006). While trimming the role of the state, neo-liberal regimes have not been able to produce enough jobs or housing in the megacities of the Third World to absorb the "surplus population" either pushed out of the countryside or drawn out by the illusive lure of urban opportunity, Davis shows. This population is a classic case of what the sociologist Ivan Illich once described as "technophagic multitude": people for whom the waste of development is the only means of survival. Other writers -- including many inspired by Marxist traditions -- have pointed out that globalisation never really meant the withering of the state; it always intended to transform it. To draw from the sociologist Pierre Bourdieu, it meant starvation for the state's left hand and empowerment of its right hand.

So, it's quite obvious that many of the holes Sauls makes in the globalisation rhetoric, were actually made long ago. And they continue to be made. We need them. The globalisation rhetoric -- in the sense of unregulated free markets -- continues to be made with religious conviction, notwithstanding Saul's evidences to the country. Nowhere is this more evident than in India, where any attempt to regulate -- or even criticise -- multinationals is seen as detrimental to economic growth.