The information is public 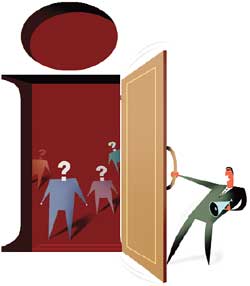 six months ago, a researcher from Delhi's Jawaharlal Nehru University filed a Right To Information application with the Central Empowered Committee (cec). He asked questions about the construction of a canal in Haryana by clearing forests. The committee, which advises the Supreme Court on forest-related matters, refused him information. In its reply, the committee said it was under no obligation to furnish the information because it was not a public authority. Dissatisfied, the researcher appealed to the Central Information Commission in December last year. And now the commission has said the cec is a public authority indeed and is bound to give information sought through Right To Information (rti) applications.

Before the information commission arrived at the decision, the committee reiterated it was not a public authority as it was established under a Supreme Court order in 2002 and the court bore its expenses.

The information commission overruled this contention. It said the Supreme Court is a public authority and going by that logic, a body it created is also a public authority. It further ruled the information the researcher had sought was relevant because it had raised the issue of violation of laws and lack of mandatory permission from Supreme Court to divert forestland for other uses.

"There is no doubt the Supreme Court committee is a public authority as even its creator, the Supreme Court, is bound to give information under the rti A ct," said Ritwick Dutta, a lawyer specializing in environmental law.

Does that mean the researcher gets answers to the questions he had asked the committee?

There is a chance the committee might decline information. The researcher, said Dutta, had asked for information that formed the basis of the committee's order. "Decision making is a judicial process and the basis of decision making cannot come under the purview of the rti Act," said Dutta. Sanjay Updhyay, another environmental law expert, however, said the cec should have based its orders on what is specified under the law. "If the cec has erred in its order, it should be challenged in the Supreme Court," he said.


Construction of the Hansi-Butana canal in the Saraswati Wildlife Sanctuary in Kurukshetra and Kaithal districts was started without waiting for mandatory clearances from the Union environment ministry and the Supreme Court (see 'Reserve Game', Down To Earth, October 16-31, 2008). When the issue of the construction was brought to the notice of the cec, it observed the project violated the wildlife and forest laws. But at the same time, it did not take any action against district officials and contractors.

The cec was of the view that the wildlife sanctuary had since been denotified and the irrigation department had voluntarily contributed Rs one crore to the forest department's kitty, so there was no need to penalize the violators. The fact that the sanctuary was a notified one at the time of starting work and mandatory permissions were not sought, was overlooked.

In his application, the researcher had asked why the committee had spared the officials who allowed the construction of the canal. The application raised queries about the legality of the forest department accepting Rs one crore in lieu of diverting two hectares of forestland for the project.

It pointed out the net value of the forest diverted to non-forest uses and the cost of compensatory afforestation for replacing the lost forest cover should have been ascertained before allowing the irrigation department to deposit any amount.

Now, the 110 km canal is nearly complete and will carry water from Bhakra mainline in Punjab to 16 parched districts of Haryana.

The forests, of course, are cleared for good.