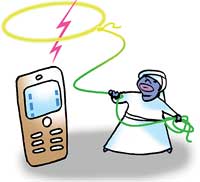 Twenty-five-year-old Sacdiyo Sheeq loved listening to Bollywood movie songs on her mobile telephone. But since hardline al Shabaab insurgents seized the southern Somali port of Kismayu, Sheeq has had to give up her favourite pastime. Al Shabaab wants our ringtones to be only a Muslim cleric reading the Hadith or Koranic verse, she told Reuters.

Al Shabaab, which Washington alleges is al Qaedas proxy in the Horn of Africa state, wants to topple the UN-backed government and impose its own strict version of Sharia law.

The heavily armed group controls much of the south and parts of the capital Mogadishu. Courts run by its clerics have ordered executions, floggings and amputations in recent months.

It has also banned movies, dancing at wedding ceremonies and playing or watching soccer in the areas under its control.We do not tolerate anything that may corrupt the people, al Shabaabs spokesperson in Kismayu, Sheikh Hassan Yaqub, told Reuters.