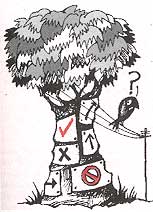 THE gazette notification empowering local communities with the right to know any information regarding hazardous industries in India, is likely to be issued soon by the ministry of environment and forests (MEF). Ministry sources state that these proposed rules have received ministerial clearance, and would become operative from the date of their notification. The rules, under the Environment (Protection) Act, 1986, compliments the Manufacture, Storage and Import of Hazardous Chemicals Rules (MSIHC Rules), 1989.

A four-tier crisis group at the local, district, state and Central levels is envisaged comprising village heads, local NGOs and social workers, newspaper editors, doctors, and local administrators who would be empowered to enter, inspect and collect industrial samples from their neighbourhood units. According to the draft notification, "the public can request the local level crisis groups for any information regarding hazards in their locality", and "the groups shall respond to all public enquiries on the subject".

As per the draft notification, the government will constitute a central crisis group and set up an alert system within 30 days of notification which will comprise state, district and local level groups.

This last group shall review on-site emergency plans prepared by the occupants of all Major Accident Hazard (MAH) installations. In India, about 16 states have this facility now.

The response to this significant development, however, was mixed. Vinod Raina of Eklavya (a Bhopal-based NGO pushing for such a move since the Bhopal gas tragedy), however, was cautious in his reaction. "We will have to see whether the local level groups would actually have access to relevant information. This will be successful only if it is mandatory for the industry to open their documents for public inspection," he said.

Rajeev Dhawan, noted environmental advocate, said in criticism, "The local level groups will remain only in an advisory capacity with no responsibility. Instead of creating another bureaucratic white elephant, something in the nature of a Right to Know Bill, or a scheme for effective enforcement might have beer a better idea."

According to ministry sources, however, these rules would ensure that MY clarification sought by the citizen(s), would be honoured. Section 10 and 11 of the Environment (Protection) Act, 1986, makes this mandatory. But critics fear that the rules may be misused by "mischievous elements". "On the other hand, these rules may also lead to an increase in public interest litigations against industry," they speculate.

Surinder Kumar, member, expert committee on environment of the Federation of Indian Chambers of Commerce and Industry, and advisor to Sriram Industrial Enterprises Limited, says that the rules would sensitise communities' attitude towards hazardous industries.

"Mock drills (for eventualities like chemical or gas leaks), carried out under the MSIHC Rules were not very successful as there was a definite communication gap between the district administration, industry and the local communities. The proposed rules would ensure proper cooperation from communities," he said.

K P Nyati, head, environment management division, Confederation of Indian Industries, opine that instead of issue-based solutions, the government should take up an integrated approach.

"Encouraging industry to get an ISO 14001 or the BS 7750 ensures that the community's right to know is in-built in the system. Industry is thus motivated to adopt higher standards of production. Also, a system wherein communication between industry and the community is encouraged, and the public can review commitments made by industry, it would help in maintaining a balance," he added.

While response to the proposed rules ranges from scepticism to optimism, there are chances that erring industries could be forced to adopt cleaner and better standards.