The floods were separated by just a few thousand years 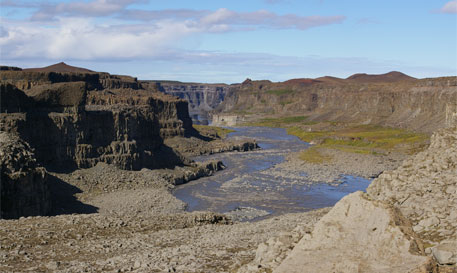 Canyons are usually formed by geological processes over the course of millions of years. But some can also be created within a brief span of time, like the Jokulsargljufur canyon in Iceland. Geologists have discovered that the canyon was formed as a result of three major flooding events that took place 2,000, 5,000 and 9,000 years ago.

The 28km-long and up to 100-metre deep canyon is home to Europe’s most powerful waterfall, Dettifoss, reports BBC. Scientists claim that their findings demonstrate the importance of brief but cataclysmic events in shaping landscapes.

“We think of natural environments as being formed over thousands of years, but sometimes they are shaped very suddenly,” Edwin Baynes, a PhD student at the University of Edinburgh and lead author, told BBC.

To estimate the time of origin of the canyon, the researchers created a timeline by studying the chemistry of the rocks in its walls. Their findings pointed to a series of tumultuous floods triggered by volcanoes that lurk beneath Iceland’s ice sheet. One such volcano is Bardarbunga, which is currently active.

The study has been published in the journal Proceedings of the National Academy of Sciences.