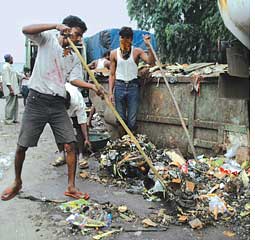 RESIDENTS of Thane city are not willing to pay tax for the garbage that goes out of their homes each day. The Thane Municipal Corporation in November 2008 had proposed a nominal solid waste tax for scientific disposal of garbage. The target was to collect Rs 3.16 crore a year. But the civic body gave in to pressure from corporators and people who were against the tax.

Residents said they were unsure whether the money would be used at all. "Thane does not have a landfill. What is the guarantee that after paying a waste surcharge, the municipality will effectively treat and dispose of waste," said C B Shekhar, a resident of a housing society. The corporation officials said they needed the money to develop scientifically engineered landfills and buy vehicles for disposing of Thane's solid waste.

"We proposed a nominal waste surcharge, but the plan was withdrawn due to opposition from corporators," said Balaji Haldekar, a medical officer with the corporation. Political parties did not want to risk their votes as assembly elections are round the corner, he added.

"We may not introduce waste tax on slum-dwellers and flat-owners for now, but tax commercial establishments such as malls and hotels. The amount will be added to their tax bill (see box: Waste tariff)," Haldekar said.

At present, the corporation bears the cost of collection, transportation and disposal of over 700 tonnes of waste daily. The corporation sought funds under the Jawaharlal Nehru National Urban Renewal Mission (jnnurm), under which a user fee must be charged to recover operation and maintenance costs of a project.

According to the corporation's city development plan (between 2006 and 2013) under jnnurm, it needs to invest Rs 4,840 crore for infrastructure projects, including Rs 128.25 crore for solid waste management. Haldekar said waste tax on commercial establishments would be levied to prove to the Centre the corporation is implementing reforms.

"It is not a bad idea to charge people for waste management," said Jyoti Mhapsekar of a non-profit working with rag pickers. "Over the years, cost of garbage disposal has increased and infrastructure for scientific waste disposal is not there. People are also at fault as they consider waste to be the sole problem of the municipality."

Almitra Patel, member of a Supreme Court committee for solid waste management, supported the introduction of surcharge but stressed on administrative will and accountability. Suryapet municipality in Nalgoda district, Andhra Pradesh, took care of waste related issues within their existing budget, she said.