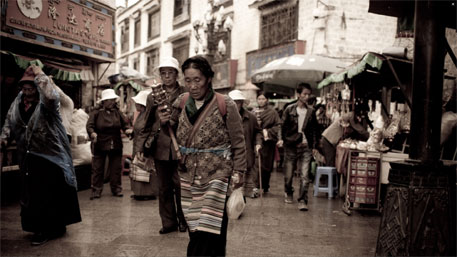 The high altitude and rarefied air in Tibet makes it an inhospitable terrain for most people. People exposed to such low levels of oxygen would normally develop hypoxia as the body attempts to adjust by pumping out more red blood cells, which turns blood into thick sludge, which can be fatal.

But the Tibetan people have been living in the region for generations. It has been observed that Tibetans experience limited increase in haemoglobin concentration that prevents their blood viscosity from reaching dangerous levels. Their rate of breathing is higher and their lung capacity is greater than that of normal people from birth. What is it in their genetic makeup that allows them to live in rarefied atmosphere with no visible discomfort?

A 2010 study found that an unusual variant of the gene, EPAS1, involved in regulating the body's production of haemoglobin, allows Tibetans to adapt to high altitude conditions. A new study published on Thursday throws more light on this. The report published online by science journal Nature claims that Tibetans may have inherited the gene from the extinct human species, the Denisovans. The report has been authored by a team of scientists from University of California, Berkeley.

The Denisovans were cousins of humans from the paleolithic age,  who inhabited Siberia and Southeast Asia. The discovery of  this species was made as recently as 2008 when a fragment of bone belonging to a little Denisovan girl was discovered in a cave in Siberia.

Normally, in humans, the common variant of the EPAS1 gene promotes red blood cell production to dangerously high levels at high altitude. The variant present in the Tibetan population, however, only promotes production only marginally, thereby preventing the side-effects that are  experienced by visitors. The effects  include nausea, insomnia, hypertension and an increased probability of heart attack due to the thickening of the blood. High mortality rates and low weight-birth babies have also been observed  in new settler populations in Tibet.

The research team further collected DNA samples from Han Chinese and Tibetan populations and found that the EPAS1 variant was so unusual that it could only have come from the Denisovans. It is not known to occur in any other population, even the Melanesians, whose genomes have been  found to be almost  5 per cent Denisovan.

The team further theorized that the introgression probably occurred when modern humans inter-bred with the Denisovan population on their way to China from Africa, and have still  retained a fraction of the Denisovan gene.

Attempts are currently being made by the team and their colleagues at the Beijing Genomics Institute to pin down the time of this interaction between the two populations.