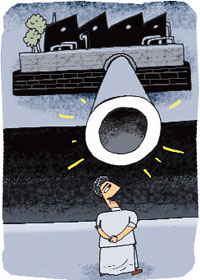 THE Madras High Court has ordered closure of more than 700 bleaching and dyeing units, and effluent treatment plants in Tirupur in Tamil Nadu. On January 28, the court also asked the state government to disconnect electricity supply to the units in the hosiery town that failed to comply with its earlier order to achieve zero liquid discharge of effluents.

“The court said the industrial units could reopen only if they achieved zero liquid discharge,” said N Siddharthan, counsel for the petitioner, Noyyal River Ayacutdars Protection Association. “This will be verified by the state pollution control board and the courtappointed monitoring committee but no deadline has been given.”

The dyeing factory owners’ association asked the court to review its order but the court refused. It suggested that the association file a review petition. The industrial units argued that the common effluent treatment plant required electricity and equipment would get damaged if it is shut down.

“We have closed all the units as per the court's orders and will work towards getting the pollution control board’s consent,” said S Swamiappan, president of the association. “We have installed treatment plants but since the technology is new and imported, we are having some problems and are unable to treat all the effluent. We will look into it.”

The court was hearing two contempt petitions filed by the Noyyal River Ayacutdars Protection Association last year against the Tamil Nadu Pollution Control Board, public works department, Tirupur Dyeing Factory Owners Association and the Tirupur Bleaching Units/Industries Owners Association. The petitions stated that none of these bodies had complied with the court’s 2006 interim orders or with the pollution control laws.

In 2006, the court had ordered that the units pay a fine for polluting the Noyyal till they achieved zero liquid discharge latest by July 31, 2007. It had directed shutting down the units that failed to meet the deadline.

But the pollution control board did not close the defaulting units. The only action it took was to inspect the units in May 2008 with the court’s monitoring committee and issue show-cause notice. The committee report not only noted an unauthorised increase in production but also found that it was a regular feature—some units increased production machinery up to 10 times the permitted limit. In 2008, the court told the board to remove unauthorised excess machinery in the Tirupur units and submit a report by July 2008. The board only filed an affidavit in 2010 admitting that industrial units discharged more effluent than permitted.

The committee report also indicted the board’s field officers for not carrying out inspections of the common effluent treatment plant. Their excuse was that the matter was pending in the Supreme Court. The industrial units had filed an appeal in the Supreme Court against the high court’s 2006 orders.

“The Supreme Court stayed the closure of the units, maintaining the status quo in 2007. The units took advantage of this stay order to continue polluting the river,” said A P Kandasamy, president of the Ayacutdars Association. “The order to ensure zero discharge still applied but the units did not comply.”

In October 2009, the Supreme Court gave final orders, setting a deadline of January 5, 2010, for the units to achieve zero discharge and pay compensation for damaging the area’s ecology till April 2010. The Supreme Court also noted that the matter had been pending for two-and-a-half years while units were allowed to function.

The petitioners asked the high court to take action against the pollution control board’s officials. The court has only asked for a list of officers in charge during the relevant time. It will hear the case in March 2011.