Cell phone networking antennae can be injurious to health 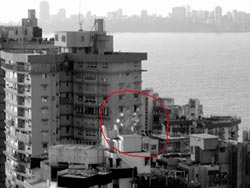 in what is perhaps a first for India, a Mumbai civil court recently ordered a cellular phone service provider to dismantle one of its networking antennae from a residential apartment over fears that the device was causing radiation exposure. The latent message behind the directive is that mobile phone towers and base stations can be hazardous to human health.

The installation of such structures atop buildings, including residential ones, is not a new development. In fact, they are a prerequisite for enhancing connectivity. But urban areas across the country have witnessed a sudden surge in these units due to a sharp increase in mobile phone subscribers.

By August 2003, India had more than 10,000 base stations as compared to a mere 3,529 in August 2001, reveals Satyan Nayar, senior director, Cellular Operators Association of India, a representative body of the domestic mobile phone industry. "These figures do not include the structures of government-run entities such as Bharat Sanchar Nigam Limited (bsnl) and Mahanagar Telephone Nigam Limited (mtnl). Neither do they take into account a major private player, Reliance Infocomm Limited. Therefore, the actual number of the units would obviously be much higher," points out Nayar.

What should, however, set the alarm bells ringing is that the Telecom Regulatory Authority of India (trai), the nodal body for telecommunication services in the country, has no legal provisions to deal with the health aspect of the matter.
It was in September 2001 that Bharti Cellular Limited, one of the industry's top service providers, approached the governing body of a 20-storeyed residential building located in Cuffe Parade, South Mumbai. The company wanted to place two-feet-high single-stick antennae on the roof of the building. Consequently, three such structures were installed on the 11th floor. In March 2002, Bharti approached the chairperson and secretary of the housing society for converting the building into a hub station for the whole of South Mumbai. The hub was installed and its operations commenced in the same month. A pact was inked between the company and the two office-bearers only later, in October 2002 -- that, too, without informing all the residents of the building.

As of now, apart from the hub station, there are four stick antennae in the building. The hub is 30-feet high, has nine drums of 0.6-metre diameter each and emits radio frequency (rf) waves (see box: Communication channels).
Trouble arose soon after the setting up of the hub, when people residing in the building's upper floors realised that they were more exposed to the health risks posed by rf waves. On October 18, 2003, an 11th floor resident filed a case in the Bombay City Civil Court against Bharti and the society's chairperson and secretary. He contended that the rf waves from the tower were affecting his health as well as those of his family members. The petitioner alleged that ever since the equipment had been installed outside his flat, they had begun experiencing sleep disorders. This, in turn, had led to increased stress levels. He asked for the antenna and the hub to be removed. The agreement does contain a clause stating that Bharti would remove all its antennae and other equipment from the building if it were proved that the same could be harmful to human life.

But Bharti feels that it has been needlessly dragged to court in a dispute that concerns a disgruntled resident of the building and its society members. Deepak Jolly, director, corporate communications, Bharti, asserts: "Telecom is an essential service and we follow the best safety standards. The demand for removing the tower from the building is being made on a very flimsy ground (his allusion is to the health aspect)." According to him, the court has not asked Bharti to remove the entire station. This, he infers, means that the court does not support the health claim at all. Yet Bharti appealed against the verdict in the Bombay High Court on March 11, 2004, and the hearing is to take place after the summer break.

It is noteworthy that contrary to Jolly's claims, the civil court has given primacy to the health issue in its February judgement. The court categorically stated that the likelihood of health implications, based on scientific evidence, was reason enough for the matter to be taken up. Just because the health impact cannot be calculated now, does not give the defendant the right to dismiss it altogether, it noted.


Are rf waves really harmful to health? While a lot of research has already been done on the subject and studies are still being conducted, the World Health Organization (who) says it is difficult to draw a conclusion at this stage. All established health impacts of rf exposure are related only to heating and are called the 'thermal' effect.

The International Commission on Non-Ionizing Radiation, Munich, Germany, has laid down guidelines pertaining to the safety of rf, which talk of limits based on thermal radiation. As such, mobile phone base stations comply with these rules.At the same time, studies conducted by independent agencies and researchers suggest that there are other health implications which cannot be overlooked. Gerald Hyland of Warwick University, uk, says that such guidelines afford no safety and protection against non-thermal radiation. Hyland states in a report: "This non-ionising electromagnetic pollution of technological origin is particularly insidious, in that it escapes detection by the senses.... Yet the nature of the pollution is such that there is literally nowhere to hide."

He further mentions that children, with their vulnerable immune systems, are able to cope less with any adverse health effect provoked by low-level exposures to such radiation. He also maintains that rf suppresses the production of melatonin -- a sleep inducing hormone produced at the base of the brain -- thus hindering the natural repairing process of the body that takes place at night. Hyland is of the opinion that exposure of infants to rf may lead to childhood cancer due to its mutagenic and carcinogenic effects.


In spite of these distressing findings, mobile phone stations continue to sprout in residential localities. One of the main reasons for this could be that getting the structures installed is a lucrative proposition. The society of the Cuffe Parade high-rise, for instance, gets Rs 75,000 per month from the cellular operator. Besides this, each resident is given around Rs 300 per month. The society also gets a whopping Rs 8.25 lakh, which it deposits with the municipal corporation as tax.

In cities like Delhi, where cell phone stations are often set up on unused roofs of single-storeyed apartments, the money doled out to the resident could well be about Rs 10-12 thousand per month. "An unused roof thus becomes a source for income," says a representative of Reliance Infocomm. Jolly concedes that residents with unused roof spaces often seek him out for the installation of towers purely for some extra money.


That there are no regulations in India to deal with the issue from the health perspective compounds the problem further. Laws under the Consumer Protection Act cover the quality of such products, but do not offer protection against their health hazards. trai, too, has no powers in this respect. In fact, none of the agencies whose approval is mandatory for setting up the towers looks into the health angle (see box: Seeking the nod).

In stark contrast, some other countries are undertaking damage control measures. The us passed a memorandum in 1995, stating that transmitter masts should not be sited in schools or near residential areas. New Zealand, too, has prohibited cellular antennae in the vicinity of schools. The who advocates precautionary steps that would result in reduction of rf waves through voluntary means.