'Will the Indian government abandon mining projects to protect us?' ask residents of Singrauli who face displacement because of Mahan coal project

Ever since India assumed presidency of the Convention on Biological Diversity (CBD) on October 8, it has never missed a chance to reiterate its commitment to conserving biodiversity and protecting indigenous people and their traditional knowledge. Indian officials attending the ongoing CoP 11 meet at Hyderabad have been highlighting the Forest Rights Act (FRA) as evidence of India's commitment to protect local communities. But the government's actions are completely at variance with the commitments articulated by Prime Minister Manmohan Singh on October 16 when he spoke of involving local communities in conservation efforts.

A day before the prime minister’s visit to Hyderabad to address the CBD delegates, a small group of people from villages in Madhya Pradesh’s tribal-dominated Singrauli district, which is under threat from the government’s massive coal expansion programme, spoke of how they are being thrown out of their forests for coal mining. A few of them who interacted with media persons at a press conference belonged to the Kharwar tribe, a protected tribal community, from villages such as Amelia and Budher, falling in the proposed Mahan mining project area (See Mahan at all costs). The press conference was organised by non-profits Greenpeace India and Kalpavriksh.

“It was with great difficulty that we managed to participate in this meeting,” said Bechanlal of Amelia village. “We are continuously being harassed and threatened by the mining company (Mahan Coal Ltd, a joint venture of Essar and Hindaloco). The government is interested only in generating power. They are least bothered about us,” he added. “We used to collect mahua (a minor forest produce)  and sell it for Rs 17-20 a kg. We also collect other forest produce like tendu leaves, chironji, harra, bamboo and mushrooms. Now, the company people don’t allow us to enter the forest. They say the forest is now theirs. How can it be? If the government gives away these forests, we have no other means to live and we will not even get any compensation because we have no rights over the forests,” said Radha Kali, a Kharawar tribal woman from the same village.

A report, Countering Coal: Community Forests Rights and Coal Mining Regions of India, prepared by Greenpeace India and Kalpavriksh, reveals that in the Singrauli region, 5,872.18 ha of forest have been officially diverted for non-forest uses since the enactment of the Forest Conservation Act in 1980, till mid-2011. This area includes 5,760.55 ha of reserve forests and 111.60 ha of revenue forests. As per the state forest department data, approval is awaited for diverting 3,229.06 ha of forests in Singrauli. The state has received in-principle approval to divert another 788.49 ha of forests from the Union Ministry of Environment and Forests (MoEF), and stage II (final clearance) is pending.

The scale of destruction of forests due to coal mining is unprecedented, with an estimated 1.1 million ha under threat in the Central Indian region from just 13 coal fields, says rhe report. If the Indian government implements its expansion programme, then over 14,000 tribal people will lose their traditional rights and livelihood in just one coal block of Mahan zone.

Representatives of villages, such as Budher, Amelia, Piderwah, Suhira and others, who are dependent on the Mahan and Chhatrasal forests and the adjoining block (sought by Reliance Power), have repeatedly written to the district collector, MoEF and the special expert committee of MoEF, objecting to the forest clearance. They have appealed that since the process of recognising their rights is not complete, approval should not be given to the mining project. Sixty-seven community forests rights claims have been filed by tribal communities and 24 by other traditional forest-dwelling communities. 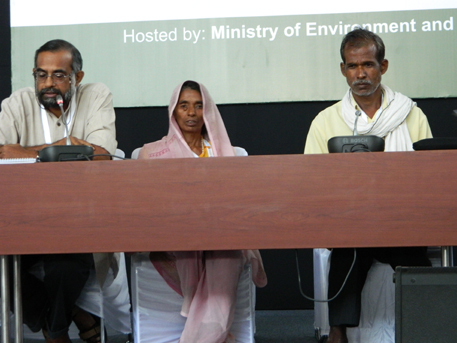 “we have been sending letters after letters but are not getting any positive response,” said Bhagidhar from Budher village. The latest set of letters have been sent to the district collector in June and August 2012. The letter dated August 16, 2012 from Amelia and Suhira villages highlight that the residents were not allowed to pass a resolution for their community forest rights claims on Mahan at the gram sabha meeting on the previous day. They made an attempt to do so five times or so, even as they asked the representatives of the project proponent Mahan Coal Ltd to leave the meeting of the gram sabha when the resolution was being proposed.

The coal reserves of India are buried up to the depth of 1,200 metres and have been estimated by the Geological Survey of India at 276.81 billion tonnes. Coal is found at these levels in Madhya Pradesh, Jharkhand, Odisha, Chhattisgarh, Andhra Pradesh and Maharashtra. As per the Ministry of Mines projections, coal consumption is projected to increase to about 1,500 million tonnes per year by 2031-32.

“In its blind pursuit of economic growth, the government is undermining the ecological and livelihood security of millions of people; the Mahan coal mining process is part of this injustice. The Forest Rights Act could provide some safeguards against this injustice, but it has not been implemented,” says Ashish Kothari of Kalpavriksh.

According to the July 2009 circular of MoEF, no approval for forestland diversion can be granted until the recognition of of rights process under the Forest Rights Act is completed, pointed out Samit Aich, executive director of Greenpeace India. There is a huge gap between the government’s words and deeds, he said.