Vanishing from Panna Reserve, too 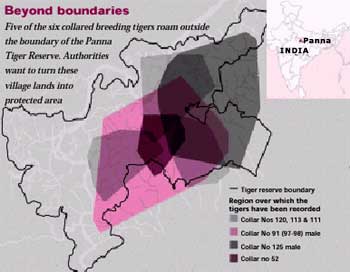 The Panna National Park was created in 1981. It was declared a Project Tiger Reserve in 1994, becoming the 22nd in the country and the fifth in mp to be accorded that status. ptr consists of areas from the former Gangau Wildlife Sanctuary that was created in 1975. This sanctuary comprised territorial forests of the present North Panna forest division to which a portion of the adjoining Chhatarpur forest division was added later. The reserved forests in Panna district and some protected forests in Chhatarpur district were the hunting preserves of the erstwhile rulers of Panna, Chhatarpur and Bijawar princely states.

The best years of ptr were from 1995 to 2002, when tiger density in the 542 sq km park went up from 2-3 per 100 square kilometres (sq km) to 7 per 100 sq km, according to Chundawat, who has spent nine years studying the feline predators in the reserve. Then, over the past couple of years, nine of the 11 breeding females either died or went missing. As many as 21 mature cubs are also missing. But ptr field director Sanjay Mukharya disputes the research, "We do not go by this. Our census shows that the tiger population has increased over the past five years from 25 to 34."

Even in 2002, the ptr management had reacted with disbelief when Chundawat reported the first snaring of a tiger from the reserve -- the first of the six to be poached. His team had put a radio collar on the tiger to study its movements. "I shot off a letter to the Project Tiger directorate then. And I was called up by an upset and angry field director," he told Down To Earth. "My team photographed the snared tiger but the forest department snatched the camera roll from them. We had to steal a copy out of the department later," alleges Chundawat.

The researchers have gathered a plethora of scientific information on tigers in the reserve. The data shows the cases of missing tigers and cubs have increased exponentially since the year 2000 (see graph: Has the management gone amiss?). Counters Mukharya, "The tigers go and come. If these have gone, others will come. Just because they were not seen does not mean that they are not there."

Chundawat is undeterred: "We are sure that six of the nine missing tigers have been poached. We have circumstantial evidence. But we cannot really predict it for each one of the tigers because we are now denied permission to set up camera traps." Camera traps are used to carry out a statistical prediction of tiger populations. It is a technique that several wildlife biologists have been using successfully to counter the hotly debated census method that relies on pugmark identification.


The research done in Panna shows the protected areas do not really define the boundaries where tiger conservation should end. All the six tigers poached (they had been radio-collared) were found frequenting neighbouring fields and villages (beyond ptr boundaries) as well as non-protected forest patches in the vicinity. In fact, the tiger recorded poached in 2002 was snared in one such fringe area.

But Project Tiger has constantly looked at the protected areas as the only region to focus all its money and energy on. The tiger reserves (the area that gets money under Project Tiger) are merely the protected areas and often fail to cover the entire habitat of these cats. To be effective, the management of reserves should involve neighbouring villages in looking after the habitat. Sadly, this doesn't happen. "The ministry likes to spend money only on 'forest land', it's as territorial as the tiger, rather worse at times," says a senior forest officer with the Union ministry of environment and forests (moef), on condition of anonymity.

To override the problem of covering the tiger habitat, the state forest department has come up with a predictable solution -- acquire neighbouring lands. "A proposal to include a further 20,000 ha area under the national park and create another 1,000 ha of buffer zone (where selective human activities are permitted) is already in advanced stages in the ministry," says Mukharya.

To its detriment moef has been shifting people out of the parks (including Panna) over the past few years, thus alienating them from the park authorities. Three villages were shifted out of Panna last year. Ten more villages remain inside the reserve. "The shifting was so ham-handed and undemocratic that nearly half the people have returned to the original village site in the park," Chundawat points out. This has made the villagers wary of and hostile to the department. Thus, the people who could have become ptr 's first level of local intelligence, now look upon the forests as a problem and are loath to help the officials. Park officials accept that the relocation of villages has not been perfect. "Yes some of the villagers have gone back in, it is not an easy task. But we have moved a proposal to shift another two villages within this calendar year," says Mukharya.

The story is so similar to Sariska's that critics say it is ominous. The reason the tiger's disappearance in, first, Sariska and Ranthambore and, now, in Panna has been reported is because wildlife researchers have acted like whistleblowers. But the government has reacted negatively. The research team's permission to work in Panna was revoked when the scientists made their revelations and Project Tiger director Rajesh Gopal even accused them of 'hidden agendas'. The permits have now been reinstated but they anyway expire this March. The government has not entertained the application to extend the field study period. Come April and Panna will be an open hunting ground as the forest department keeps the researchers out, the villagers antagonised and the poachers happy.