Over 1,000 people stranded in villages but relief and rescue operations focus only on pilgrim centres

While most of the relief and rescue operations in flood-ravaged Uttarakhand is concentrated around Kedarnath, little attention has been paid to Pithoragarh district, which was hit by floods twice in recent days. An estimated 1,000 people are stranded in the area as roads connecting to different areas have collapsed during floods and landslides. Some of the roads were well-maintained and in good shape as they fall on the way to Kailash Mansarovar.

There have not been many casualties in Madkot, Munsiari, Jualjibi and Dharchula, the worst-affected taluks in Pithoragarh district, but there has been great damage to land and property. The 100-year-old Jualjibi Bridge that connected India with Nepal and allowed trade in the area, was swept away by the Kailganga river—the Kaliganga and the Goriganga rivers originate in the Milam glacier. The glacial lake at the snout of the glacier is being blamed for the flood torrent.

On the Indian side, the river damaged 10 houses completely. People from remote villages walked up to 10 km to collect aid that was being distributed at a place between Dharchula and Jualjibi. 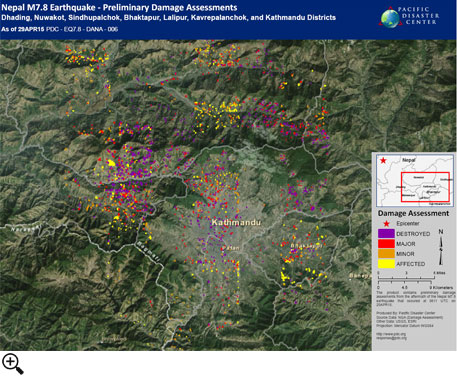 They said floods occurred at 4 am on june 16 and damaged villages Ghattabagar, Koli, Mori and Lumti. The floods returned on June 22, and this time four villages, Talla Mankot, Malla Mankot, Talla Gharori and Malla Gharori were damaged. People in these remote areas do not store much ration in their houses as they shift to lower areas of Kumaon during harsh winter months. So, there is a constant fear that those who did not die of the calamity may die of hunger since these villages have been completely cut off for over 12 days now.

The state government has said it would take a week to restore connection with Pithoragarh. People say the government is showing step-motherly attitude to this area and that ministers have been focusing on Kedarnath and Uttarkashi. Incessant rains and bad weather prevent army choppers from landing in the area. Some private organisations are distributing relief on the Jualjibi-Madkot road, but these are being availed by people who did not suffer in the calamity; the affected people have not been able to reach this far.

The residents in the flood-affected areas live in constant fear of another flood. A group of local youth went up to check the glacial lake said there is a lot of water in it. It may overflow again if another cloudburst happens.