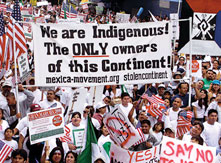 After two decades of debate, the un General Assembly on September 13, adopted a non-binding declaration on the rights of indigenous people, despite opposition from the us, Australia, Canada and New Zealand--countries with large native population.

The un Declaration on the Rights of Indigenous Peoples was adopted after 143 member nations, including India, voted for it. Eleven nations abstained from the vote.

The four countries who voted against the declaration say there are diosappointed with the text. They expressed concern over provisions on self-determination, rights to land and resources, and giving indigenous peoples rights of veto over national legislation and state management or resources. Among other contentious issues was one article saying "states shall give legal recognition and protection" to lands, territories and resources "traditionally owned, occupied or otherwise used or acquired" by indigenous people.

"These provisions are overly broad, unclear and capable of a wide variety of interpretations," Canada's un ambassador John McNee told the General Assembly. The New Zealand government said it voted against the declaration because of its disadvantages for non-indigenous people and conflicts with the country's existing laws.

The un secretary-general, Ban Ki-moon, however, describes the declaration as a "triumph for the world's 270 million aboriginal people". The declaration sets out the individual and collective rights of indigenous peoples, as well as their rights to culture, identity, language, employment, health, education and other issues, while prohibiting discrimination against them. But it does not create any new right, nor does it place indigenous peoples in a special category. Experts in Latin Amrica, thus, seem less enthusiastic about it. "The declaration is non-binding, very general and full of vague terms and tricky wording," said Jos del Val, head of the Mexico Multicultural Nation University Programme, talking to a Latin Amrican news agency, ips news.

The declaration was expected to be adopted in 2006. It was deferred after some African countries raised objections over the text on "self-determination" and "definition of indigenous people". They endorsed the declaration after its language was amended.