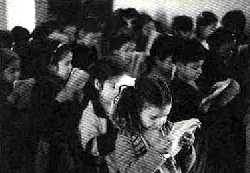 The State of the World's Children 1994, published by UNICEF on December 21, has commended India for its "steady progress". The report says India has shown a marked decline in mortality rates and considerable improvement in clean water supply, immunisation and salt iodisation. However, the report places India among countries that lag in nutrition, maternal care and education of the girl child.

Describing the "steady and unsung progress" of many developing countries towards the goal of clean water supply for all communities by 2000 AD, the UNICEF report says, "In India, the percentage of rural people with access to safe water has risen from just over 30 per cent in 1980 to over 80 per cent in 1992. If this progress is maintained, then India will reach the year 2000 target of universal access in rural areas by 1997."

Another positive step by India and four other developing countries is their use of immunisation systems to distribute Vitamin A capsules to children. About 25 per cent of the children in India have already been covered. India has been placed among the 24 developing countries where salt iodisation programmes are in full operation. Referring to the eradication of guinea worms, the UNICEF report says, "India, where the number of reported cases is down from 40,000 in 1984 to under 1,000 cases in 1992, is on the way to eradicating the disease by 1995."

However, India is listed among the poor performers in nutrition, oral rehydration therapy (ORT) and maternal care and education for the girl child. In South Asian countries, the use of ORT has increased by less than 10 per cent since 1986. Meanwhile, ORT use in sub-Saharan Africa has increased to 59 per cent of diarrhoea cases from 13 per cent in 1986. Moreover, India, Bangladesh and Pakistan account for one-third of the world's polio victims.