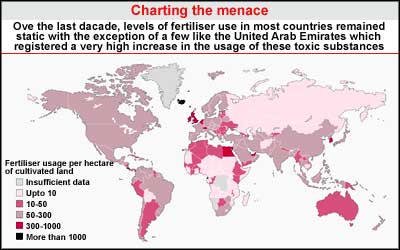 Despite environmental pressure against the use of chemical fertilisers, the deadly substances continue to be used unabated across the globe. At the end of the 20th century an average of 91 kgs of fertilisers were used for every hectare of cropland -- an increase of more than a third since the mid 1970s. This masks huge variations, from just one kg in Rwanda or Mongolia, to more than 700 kgs in Switzerland. The developing world accounted for the maximum increase -- between the mid 1980s and mid 1990s, both agricultural production and fertiliser use increased by approximately 42 per cent. Consumption of fertilisers and its growth were highest in Asia. The Food and Agricultural Organisation predicts a further rise in the usage of these deadly substances in the South, probably of around 2.8 per cent per year from current levels of almost 99 kgs of fertiliser per hectare of cropland.