Exposure to ddt increases the risk of child mortality 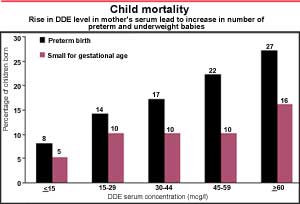 a recent study has proved that exposure to pesticides such as ddt (dichloro diphenyl trichloroethane) can increase child mortality ( Lancet , Vol 358, July 2001, pp 110-114).

Mathew P Longnecker of the Epidemiology branch of National Institute of Environmental Health Sciences, usa and his colleagues used the serum samples for study that were collected during the us Collaborative Perinatal Project during 1959-1966. During this period, ddt was used extensively in usa to control mosquitoes.

Out of more than 44,000 children born during this period, complete data such as the weight of the child at birth and availability of minimum quantity of the serum needed for testing was available only on 2,380 children. The scientists estimated the amount of dde (dichloro diphenyl trichloroethylene), a breakdown product of ddt , in the samples and found that the levels ranged from 3 mcg/L (micrograms per liter) to 178 mcg/L. Out of these 2,380 children, 361 were born prematurely and 221 were comparatively underweight. The scientists found that higher the amount of dde in the serum of mothers, more are the chances that their babies would be born prematurely or may be comparatively small for their age.

At present, American women have only around 15 mcg/L, which is nearly half the amount present during the early 60's. The scientists attribute this reduction to the ban imposed on the use of the pesticide in 1970. As only those children that had survived had been included in the study, the impact of the chemical might be underestimated.

The researchers suggest that banning the chemical has improved the child health in usa and this should be used for assessment of risks and benefits of mosquito control using this pesticide. In tropical countries like India where large quantities of the chemical is still being used, more dde is likely to be present in the people living in the area with a consequent increase in the number of child deaths. Even though developed countries have shifted to alternatives such as pyrethroids, ddt is used in poorer countries to control malaria, as it is cheaper. The ddt is toxic to mosquitoes as it delays closing of sodium channels in neurons, so does it to the human placental tissues. This neurotoxic effect on the placenta might be bringing about the negative effect.