WHEN the much-awaited public sector Bt or genetically modified (GM) cotton was released for cultivation in 2009, there was celebration in the scientific establishment. And in the farming community Bikaneri Narma (BN Bt) was trumpeted as India’s “completely indigenous Bt variety” and farmers were looking forward to cheaper cotton seeds. There was an added advantage to BN Bt: unlike the Bt hybrids of private companies the Bt variety could be reused by cultivators. Along with the variety, the Indian Council of Agricultural Research (ICAR) also released the Bt NHH 44 hybrid.

That euphoria was short-lived because the seeds were withdrawn from the market after the first season. The reasons given at the time were poor performance of the seed and reports of “contamination”. There was also speculation at the time of sabotage. Now, almost two years down the line the full details of the unsavoury episode have emerged and, according to old ICAR hands, this is possibly the biggest research scandal involving as it does the Indian Agriculture Research Institute’s prestigious National Research Centre for Plant Biotechnology (NRCPB).

Along with NRCPB, whose director Polumetla Ananda Kumar supplied the unique Cry1Ac gene construct for the project, a premier academic institution, the University of Agricultural Sciences-Dharwad (UAS-D), is at the heart of this scandal. What the episode reveals is the hubris of some of the scientists involved in the project, the lack of scientific rigour in ICAR to understand the complexities of such a project and, worst of all, the conflict of interest between crop developers and the regulator, the Genetic Engineering Approval (now changed to Appraisal) Committee (GEAC). Also exposed is the GEAC’s lax scrutiny of data submitted by crop developers. Tainted, too, by association is the Central Institute for Cotton Research (CICR), Nagpur, which conducted the field trials and was given the task of commercialising the Bt seeds.

It transpires that the primary reason why these seeds were pulled back was the widespread presence of MON 531, the genetic event that is the intellectual property (IP) of global agrobiotech giant Monsanto, instead of the BNLA 106 event claimed by the authors. MON 531 is the most widely used event in the hybrids sold in the Indian market. The BNLA 106 event was developed by UAS-D and NRCPB under ICAR’s generously funded National Agricultural Technology Project. Event here means the site of integration of the Bt gene at a fixed location on the chromosome of the plant. 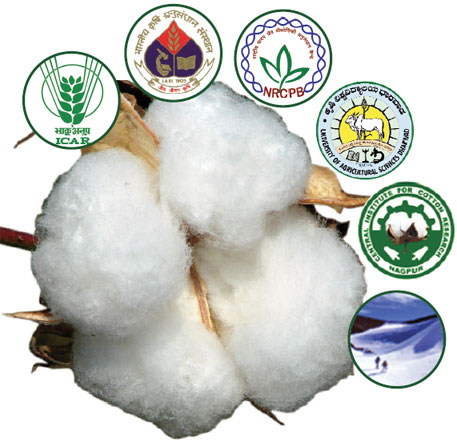 Documents available with Down To Earth (DTE) reveal that ICAR repeatedly glossed over complaints of poor performance and “contamination” of the seeds. Instead, there appears to have been an unseemly rush to take the seed to market—and with disastrous consequences. The genesis of ICAR’s ambitions to launch its GM cotton started more than a decade ago when Ishwarappa S Katageri of UAS-D developed the variety using a truncated Cry1Ac gene construct given by Ananda Kumar. This gene construct was reportedly “borrowed” from Illimar Altosaar, director, Agricultural Biotechnology Laboratories at the University of Ottawa, Canada. Altosaar is described by the university as “a world-renowned expert on plant biology and GM organisms”. The first time that research on this project was made public was at World Cotton Research Conference in Lubbock, Texas, in September 2007. That paper, Genetic Transformation of an Elite Indian Genotype of Cotton (Gossypium hirsutum L.) for Insect Resistance, was presented by Katageri, the lead author. The other authors were H M Vamadevaiah (also from UAS-D), Basavaraj M Khadi (also from UAS-D who served as director of CICR from 2005 to 2008) and Ananda Kumar. The paper was published with same title in Current Science in December 2007.

The key issue that is being debated is how and where the “contamination” took place. But many scientists pooh-pooh the theory of contamination. They point out that Monsanto’s gene Cry1Ac could have appeared in National Agriculture Technology Project either inadvertently or through deliberate fraud. Inadvertent contamination could occur through cross-pollination by honeybees from Monsanto’s Bt hybrids into any variety and result in the presence of just one to five per cent Monsanto’s gene/event in the seeds. This is because cotton pollen is heavy and sticky and wind-borne pollination is reportedly low.

In the case of a fraud, breeders could have used—or have been given—any of Monsanto’s Bt hybrids in their programme to transfer the gene/event into any variety through simple plant breeding techniques. In tests conducted by ICAR in 2008 all the BN Bt seeds tested contained MON 531. Even as early as May 2005, results indicated that all the samples possible contained a full length Cry1Ac gene and the probability of the presence of MON 531 event in the material used, according to review undertaken by ICAR. 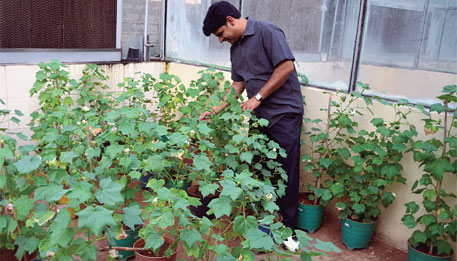 Khadi was told of this result in August 2005. Thereafter, BN Bt was field tested with all the material and seeds coming from UAS-D. Thereafter biosafety reports and field data was submitted to GEAC and approved for commercial cultivation on May 2, 2008. Khadi was then a member of GEAC and had pushed for approval. Two days later, Khadi sent 10 seeds to the Bt referral laboratory which confirmed presence of MON 531 in eight of the samples on May 5, although Avasthagen, a Bengaluru-based biotech company, said there was no such contamination in any of the samples.

At an urgent meeting convened by P L Gautam, then deputy director-general (crop sciences), ICAR, on May 21, the results were discussed with all those involved in the project. Although some of the participating scientists pointed out that Avasthagen data was flawed and urged that a third opinion be sought to reconfirm the event, the project directors insisted the UAS-D event was unique and different from that of other known Bt transgene events. Minutes of the meeting reveal that Gautam took the view that the presence of MON 531 was not an issue because of the evidence provided by Kumar. He then directed CICR to take forward the commercialisation of BN Bt and Bt NHH 44 “with full zeal”.

UAS-D, accordingly, took up seed production and only by the original breeders. They produced 24,900 kg of BN Bt and 1,500 kg of Bt NHH 44, which was distributed to Mahabeej, the Maharashtra state-owned seed corporation, for multiplication. However, farmers growing these seeds for Mahabeej began complaining of poor performance—the yield was half to a quarter of the normal—and lack of purity of trait. These reports were checked by six independent teams from CICR. At an emergency meeting called by the Maharashtra government in October 2009 to institute remedial measures, Katageri convinced the officials that the BNLA 106 event had been tested and re-tested, with molecular analysis being carried out by NRCPB. But, finally, at December 2009 meeting chaired by Swapan Kumar Datta, deputy director-general (crop sciences), ICAR, it was decided to immediately suspend production and sale of the BN Bt seeds.

What is surprising is why the elite Bikaneri Narma, a popular variety cultivated in Punjab, Rajasthan and Haryana, should have failed so badly when it was genetically modified. Although farmers cultivating the BN Bt and Bt NHH 44 for Mahabeej reported abysmally low yields, the ICAR meeting of December 2009 surmised that the poor performance was “due to inappropriate management practices”.

Despite repeated mails and calls, ICAR chief S Ayyappan did not respond to questions from DTE about the action taken in such a serious case or if a fresh inquiry was under way. Ayyappan only took over as ICAR director-general on January 1, 2010, from Mangala Rai who served till December 31, 2009. Nor were the scientists involved in this fiasco— Khadi, Katageri or Kumar—willing to comment on the issue. Two of them said an inquiry was under way and it would not be proper to talk about the matter. Even Keshav Kranthi, who was acting director, CICR, when it packed the seeds received from UAS-D and despatched them to various seed multipliers, refused to comment on the issue.