Centre promises 150 days of work to tribal households under MGNREGA

THE UPA government on February 28 promised 150 days of employment every year to forest dwellers in forest areas under Mahatma Gandhi National Rural Employment Guarantee Act (MGNREGA). The move is expected to benefit UPA in Andhra Pradesh, Chhattisgarh, Jharkhand and Odisha during the upcoming general elections. The four states have 0.8 million beneficiaries out of the total 1.4 million beneficiaries of the Forest Rights Act, 2006 (FRA), which recognises the rights of forest dwellers over forestland.

Union rural development minister Jairam Ramesh says the move will provide employment and contain left-wing extremism in tribal areas, but ministry officials and experts believe it is nothing more than a poll gimmick. The viewpoint of the experts seems valid when one considers the performance of the scheme, especially in tribal areas (see ‘Poor performance’). MGNREGA, which was introduced in 2006, guarantees 100 days of wage employment in a financial year to a rural household. But Ministry of Rural Development (MoRD) data suggests that only one in every 10 ST households is getting the 100 days of employment under the scheme. The scheme gave 100 days of employment to only 14 per cent and 12 per cent households in 2011 and 2012 respectively. 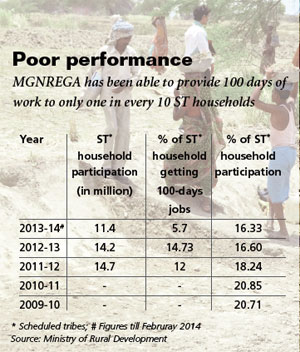 India has 21.5 million tribal households, as per Census 2011. MoRD data suggests that while 11.4 million of ST households are enrolled under the scheme, only five per cent got 100 days of employment in 2013-14.

As a result, tribal participation in the demand–based scheme is dipping. The percentage of participation has dropped from 21 per cent to 16 per cent in the last five years.

“On the one hand, the government has cut down the scheme budget by Rs 2,000 crore and on the other hand it has added another 50 days,” says Nikhil Dey of Majdoor Kisan Shakti Sanghthan, a non-profit working on the scheme in Rajasthan. A senior MoRD official says, “Increasing the number of days is a poll gimmick. It would only remian on papers as we do not have a properly functioning delivery mechanism.”

The UPA had unsuccessfully increased the workdays to 150 for households in drought-affected states of Gujarat, Jharkhand, Karnataka, Maharashtra and Rajasthan in 2012. In the 83 districts, the government managed only an average 31 days of jobs in a year. Even the scheme’s general implementation has not been encouraging. As per MoRD data, in the last seven years, the average number of days of jobs the scheme provided varies between 40 days and 54 days against the promised minimum 100 days of work.

The 42nd report of the Parliament committee on rural development states that weak panchayati raj institutions have failed to generate enough work under the scheme. Even MoRD joint secretary Aprajita Sarangi admits local governance problems and lack of awareness among the rural poor have slowed down the scheme, under which people have to demand work. “Weak panchayati raj institutions are unable to prepare enough projects to generate demand. For this, the ministry had started a nationwide campaign in November last year,” Sarangi says.

She thinks the recent move will strengthen the scheme. “There is large tribal migration happening and this extra 50 days will give an incentive to tribal households to work on the land they got under FRA,” says Sarangi.