Push for urban development through PPP and FDI

Union Finance Minister Arun Jaitley, in his budget speech on Thursday stressed on the need for good civic amenities in urban areas. Jaitley increased the budgetary allocation for the Pooled Municipal Debt Obligation (PMDO) facility from Rs 5,000 crore to Rs 50,000 crore for the next five years. PMDO, which was set up in 2006, encourages banks to finance infrastructure projects in urban areas on shared risk basis. Under the project, urban local bodies plan and implement public private partnership (PPP) projects.

The government plans to improve the infrastructure in at least 500 urban habitations through PMDO in the next 10 years. “For urban renewal of cities and towns, four fundamental activities are necessary—safe drinking water and sewage management, use of recycled water for growing organic fruits and vegetables, solid waste management and digital connectivity,” Jaitley said. 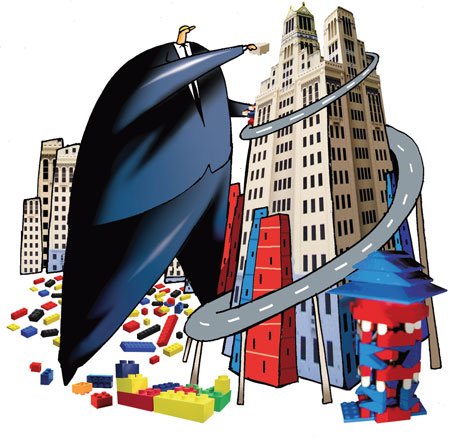 The budget also committed to provide housing for all by 2022 by announcing additional tax incentives on home loans and setting up of a mission for low-cost housing. The minister earmarked Rs 4,000 crore for low-cost housing programme which will be anchored by the National Housing Bank (NHB). An additional Rs 8,000 crore has been allocated to NHB to promote rural housing. The bank will also provide home loans at cheaper rates to the urban poor. Jaitley said that government has already outlined some other incentives, including easy FDI inflow in the housing sector. He also informed the inclusion of slum development in the list of corporate social responsibility activities.

Jaitley allocated Rs 7,060 crore for developing 100 smart cities as satellite towns to larger cities and for modernising the existing mid-sized cities. He said that the government has announced several steps to promote FDI selectively in sectors where it helps the larger interest of the Indian economy.

JNNURM on way out?

Interestingly, the budget was silent on the Jawaharlal Nehru National Urban Renewal Mission (JNNURM), which was the UPA’s flagship urban development scheme. Just after coming to power, the new NDA government had announced that JNNURM would soon be scrapped. Urban development and housing minister Venkaiah Naidu had said that a new mission will replace JNNURM. The new mission would focus on modern concept for city planning and will function under PPP.