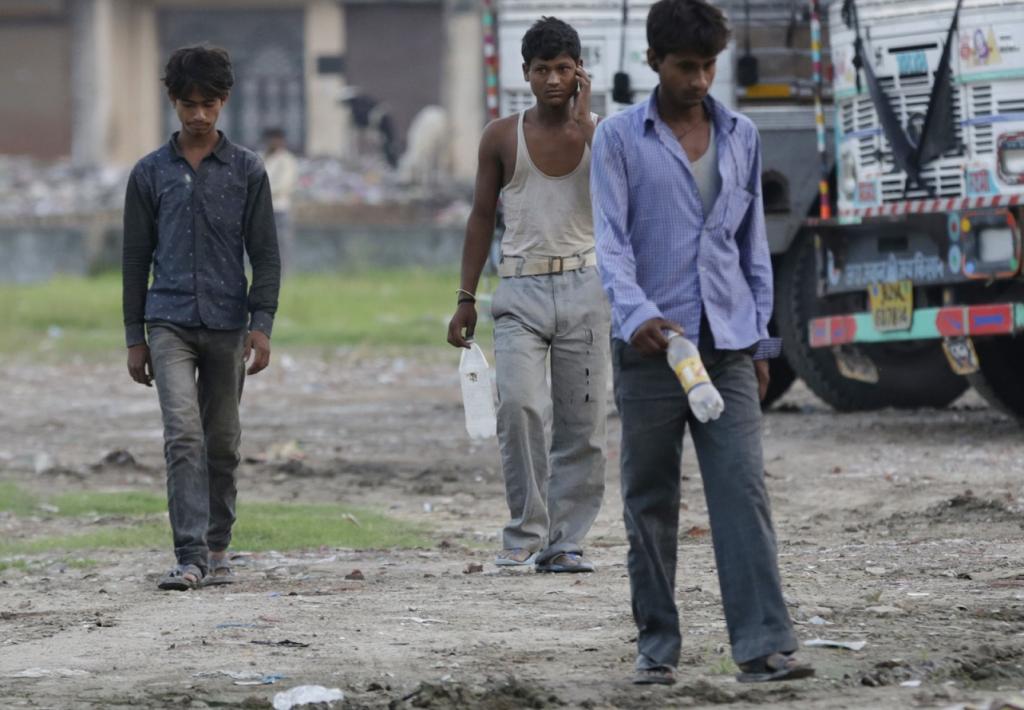 Ending open defecation is not just about building toilets but changing the behaviour of people and inspiring them to use toilets. Credit: Vikas Choudhary / CSE

Soon after assuming charge, Prime Minister Narendra Modi announced that India would become open defecation-free by October 2019. It was an ambitious target considering that 524 million Indians (till June 2017) defecate in the open every day, according to the UN figures. The last three consecutive years saw quantum jump in budget outlay for the rural component of Swachh Bharat Mission (SBM). The allocation to the urban component of the programme has remained same in the last two years. (see table). According to the Centre’s reply to a question in the Lok Sabha last December, 260 districts have been declared Open Defecation Free.  Over 300,000 villages have achieved this status, says the government’s SBM Rural portal.

Compiled by Centre for Budget and Accountability from Union; in Rs (crore)

However, the ‘mission’, in the recent times, has been reduced to a carrot-and-stick programme with multiple media reports pointing towards coercive approach adopted by the SBM officials to stop open defecation. The Centre had to issue instructions to all the states, at least twice, in 2017 to refrain from adopting coercive measures. The letter written in July by Akshay Rout, Officer on Special Duty (OSD) in the Ministry of Drinking Water & Sanitation, to the states said, “The Ministry of Drinking Water and Sanitation has taken note of some recent instances of local administrations adopting inappropriate and gender-insensitive approaches in the context of preventing open defecation. Such actions are not in keeping with the spirit of the Swachh Bharat Mission.”

Experts say that this is happening due to the fact that only a very miniscule percentage of the total SBM budget is allocated to IEC (Information, Education and Communication) activities to induce behavioural change in people who have been hitherto defecating in the open.

Not surprisingly, a study conducted by the Institute of Development Studies, Water Aid and Praxis, which was published in October 2017, claimed that several ODF villages are not free from open defecation. The study was done in three villages of Madhya Pradesh’s Sehore district, two of Uttar Pradesh’ Shamli district and three of Rajasthan’s Pali district. All of these villages were not only declared ODF but even verified so by a third party for the government. It may be mentioned here after the declaration of ODF the government gets a survey conducted to verify the ODF status. In all the surveyed villages of UP and Rajasthan, the researchers found open defecation prevalent and even identified the areas of open defecation in few of them. In one of the villages of Pali, where 900 households were surveyed, they found that the total current usage of toilets was only 1 per cent.  While in two villages of Shamli, it was 63 per cent and 16 per cent respectively.

In Sehore, researchers reported imposition of sanctions like stopping of rations, seizure of ration cards, disallowance of benefits from any panchayat-related scheme and disconnection of electricity. How can IEC be replaced by such sanctions? Experts wonder. Finding faults with the IEC programme, the report said, “Promotion of sanitation was not a holistic and sustained effort, but relied heavily on carrot (toilet incentive) and stick (shaming and sanctions), which were reportedly effective in enforcing toilet construction and short- term use,” the report said.

The findings of this report were also mentioned during the discussion in Lok Sabha by Odisha’s MP Rabindra Kumar Jena on December 28, 2017.  However, the government dismissed it saying that the sample size of the report was too small to conclude anything.

Even the comptroller and auditor general (CAG) report in 2015 said, “We found that due importance was not given to IEC and 25 per cent of total IEC expenditure was incurred on activities unrelated to IEC.”

According to the CAG report, the ministry failed to utilise funds approved under monitoring and evaluation (M&E) head. Only Rs  0.32 crore out of Rs 22.40 crore allocated was utilised on the activities covered under M&E from 2009-10 to 2013-14, diverting the remaining Rs 22.08 crore to other activities. How lack of proper monitoring is killing the programme can be gauged by joint secretary Arun Baroka’s letter to all the states written towards the end of 2017, “Reports  show that toilets  constructed  in the villages  are incomplete  and of  poor  quality  resulting in instances where  these  toilets  are  not  being  used  by people. Such instances have also been found in villages that have been declared as open defecation free. This is a serious lapse and tantamount to false and incorrect reporting on the programme status.” It seemed the government did not learn lessons from the mistakes of the past as the CAG report of 2015 had a similar observation. “In test-checked 53 districts of eight states, proportion of defunct toilets was found to be more than 33 per cent due to reasons like poor quality of construction, incomplete structure, non-maintenance, etc.,” it said.

Experts point to another grey area of the programme which requires both financial and administrative attention: technology for solid and liquid waste disposal. “What will you do of toilets if there are no proper waste management facilities. A toilet is likely to be not used at all in urban areas if it leads to slugging on roads,” says Deepak Sanan, former additional chief secretary to the government of Himachal Pradesh and adviser to the Community-led Total Sanitation Foundation. His concerns are not ill-founded.  According to the figures available on SBM portal, out of the total fund given by the Centre to states, merely 0.5 per cent was spent on solid and liquid waste management. The states spent 0.97 per cent of their budget for the same.

The Centre has also failed to take on board corporate houses for the implementation of the SBM as part of Corporate Social Responsibility for which they had designed Rashtriya Swachhta Kosh (RSK).  According to the minister of state for the Ministry of Drinking Water & Sanitation Ramesh Chandappa Jigajinag, the government got got Rs 245.04 crore and Rs 253.24 crore in 2016-17 and 2015-16 respectively. In 2017-18, the government may not be able to earn that much because till December 2017 the earning is only Rs 8.77 crore.

Sanan says not enough has been invested in training people at the ground level who are foot soldiers of the programme. His concern also finds evidence in a reply the ministry gave to the Parliament last December. “Lack of adequate capacities is a major challenge in scaling up the programme. Therefore, various initiatives are being taken to reach out to all the stakeholders,” said Jigajinagi.

The CAG pointed to few other irregularities as well. “We noted that 12.97 lakh individual household latrines (IHHLs) involving expenditure of Rs 186.17 crore were constructed by engaging contractors/ NGOs in violation of the mission’s guidelines. Further, financial irregularities like expenditure without approval, diversion of funds amounting to Rs 7.81 crore were also noticed in the construction of Solid and Liquid Waste Management (SLWM) infrastructure in 13 districts.”

Sanan says the government must stop direct funding to states for constructing toilets. “Rather they must incentivise. An honest performance evaluation of the states should be done first. The states performing better should be incentivised for performing better. That is my most important expectation from the upcoming budget for sanitation,” he says.

Whether the government would accept the CAG recommendation of converging SBM with other programmes in this year’s budget is yet to be seen. “Convergence with related programmes like NRHM and effective mechanism for independent evaluations are other important areas where Government needs to focus for achievement of desired goal of Swachh Bharat,” the CAG said. 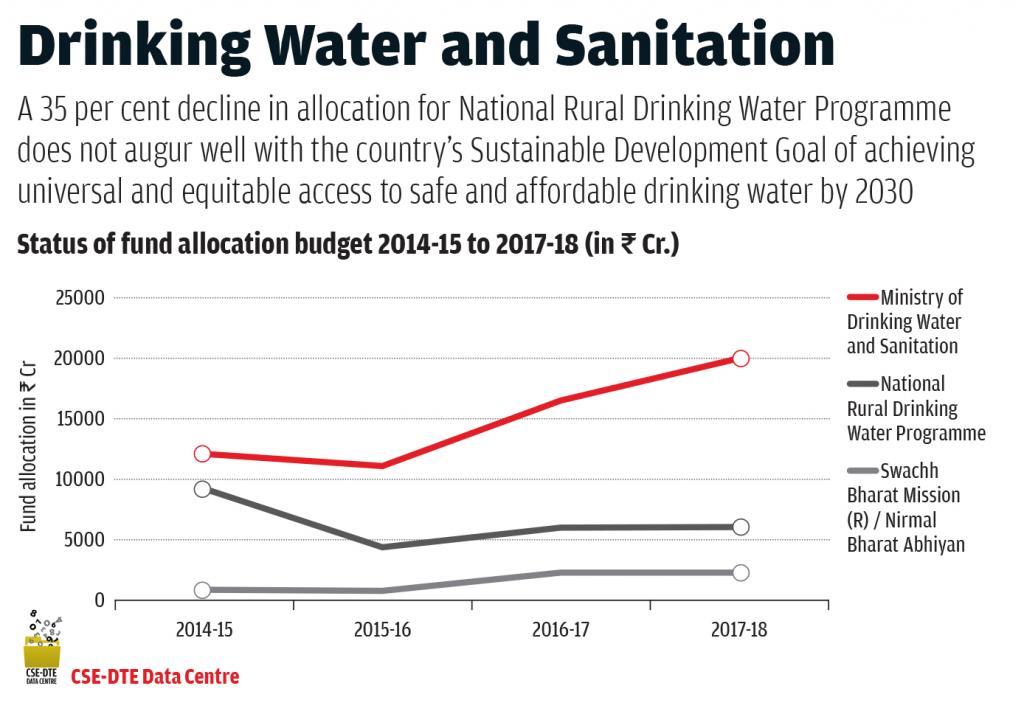