According to an unofficial estimate, there is a shortage of more than 40 million dwelling units, with the demand growing at 10 per cent per annum 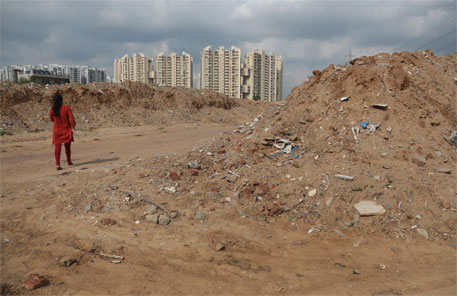 The Centre has recently launched the much-awaited Pradhan Mantri Awas Yojana (PMAY) in a bid to offer affordable houses to the urban poor in Indian cities.

The mission, which replaces and at the same time includes all the housing policies of the previous UPA government, is being hailed by builders for massive fiscal sops it plans to offer the former on housing construction. However, vital aspects, especially those regarding the quality of structures, have been left unanswered, a study by non-profit Centre for Science and Environment (CSE) says.

The Technical Group on Urban Housing Shortage (2012-17), constituted by the Union Ministry of Housing and Urban Poverty Alleviation (MoHUPA), has estimated that about 95 per cent of the housing shortage in India is experienced by the economically weaker sections and low-income groups.

In 2013, MoHUPA had revised the estimate for housing unit shortage in the country and the revision indicated that the deficit had reduced from an earlier estimate of 26.53 million units to 18.68 million units.

But there were concerns that the actual estimate of housing shortage could be much higher than this. An unofficial estimate places it at more than 40 million units, with the demand growing at 10 per cent per annum.

PMAY seeks to address the housing needs of the urban poor, including slum-dwellers, through four principal programmes. These are rehabilitation of slum dwellers with the participation of private developers using land as a resource, promotion of affordable houses to the weaker sections of the society through credit-linked subsidy, provision of affordable housing in partnership with public and private sectors and subsidisation to individuals for house construction.

The scheme will cover the entire urban area across India, consisting of 4,041 statutory towns with an initial focus on 500 Class I cities. It will be implemented in three phases. Phase-I will begin from April 2015 and go on till March 2017. It will cover 100 cities to be selected from states/Union Territories as per their willingness. Phase-II (April 2017-March 2019) will cover an additional 200 cities and Phase-III (April 2019-March 2022) will cover the remaining ones.

The overall thrust is on giving incentives to the private sector for providing affordable housing to the poor, experts say. But this requires strong enforcement, monitoring, and sound strategies to ensure quality and safe structures as well as appropriate designs sensitive to the needs of communities, the CSE study says. States need to come up with more detailed and stringent guidelines to address these concerns in the private sector.

The scheme does not adequately address the most neglected areas in technical and financial support for self-constructed houses for the poor. An estimate from the Mumbai-based Institute of Urbanology shows that between 1997 and 2002, government and private builders constructed 500,000 houses in urban India, but during the same period, people themselves built 8.5 million units on informal settlements. A lot more will have to be done to provide support to influence self-construction by the poor and low-income households.

As a large number of houses are constructed by the poor themselves, it demands professional, technical, financial, and infrastructure support. This requires governmental intervention to provide guidance on local styles, appropriate architecture and use of low-cost materials for construction.

Also, guidance is needed on innovative technology, use of low-energy-consuming building materials, space planning, rainwater harvesting, water conservation and waste treatment technologies. Local skills and capacity will have to be mobilised and upgraded to support local construction, experts feel.

According to CSE, India needs to tap the learning curve in other countries where they have adopted strategies to formalise community and professional support to help communities in informal settlements address the problem of land tenure, ownership and safe structures.

Other important criteria are making building bye-laws flexible to meet specific requirements and demarcate parcels of land in master plans or land pooling for affordable housing projects that may include formal housing, self-construction and financing schemes.