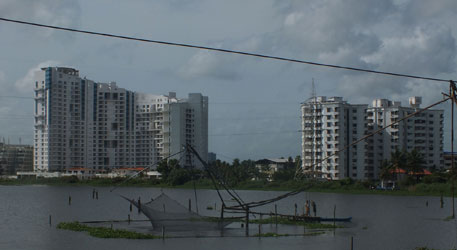 Kochi Corporation has been severely criticised by the Comptroller and Auditor General (CAG) for violating building rules under Coastal Regulation Zone (CRZ) norms.

An audit report of CAG for 2013 found that the corporation has not complied with Kerala Municipality Building Rules and violated the CRZ norms while issuing permits for construction of buildings.

The audit report on the local self-government institutions which was tabled in the state Assembly on July 14 has observed that the urban local body has failed to comply with the rules and structural plans and compromised on safety and security while issuing permits to builders. According to the report, in the case of 19 buildings, some of them multi-storeyed having up to 21 floors by the side of Chilavanoor backwaters, the corporation gave permission for construction without bothering to obtain the mandatory approvals from the Kerala Coastal Zone Management Authority (CZMA) and environmental clearance from the Ministry of Environment and the Forests.

In the case of 13 buildings, CZMA had informed the civic body about the violations in February 2011. However, the corporation directed only one construction group not to proceed with the work, observed the report. Despite the corporation's directions to stop work, the construction continued unimpeded.

In some cases, the Kerala Municipality Building rules were violated. The corporation secretary initially refrained from issuing permits but later succumbed to pressure from the Town Planning Standing Committee, noted the report.

The audit has also found construction activities in Heritage Conservation Zone of Fort Kochi. The Corporation issued permits to the construction groups without the concurrence of the Art and Heritage Commission and no objection certificate from the Archaeological Survey of India (ASI). ASI had found unauthorized building constructions near St Francis Church, which is a national monument, at Fort Kochi.

Despite ASI's findings of violations, the  Kochi corporation failed to take action, said the report.

The civic body's violation of rules has adversely affected ecology and the heritage character of the area, resulting in significant revenue loss to the corporation. Some constructions by the Kerala State Housing Board have also violated the norms, the report said.

The report slammed the local body for not having a centralised database for building permits and unauthorised constructions. The report also noted that Kochi Corporation has not been properly maintaining relevant registers and lacked vigilant monitoring system. For this reason, the civic body failed to exercise its power and control over constructions within its jurisdiction, said the report.