One of the largest IT parks in the country, it aims to create over 90,000 direct jobs

SmartCity Kochi, an Information and Technology special economic zone under construction in Kerala's Ernakulum district, has received complete environmental clearance from the Union Ministry of Environment and Forests. The project is a joint venture of the state government and Tecom Investments, a subsidiary of Dubai Holding, a private company.

SmartCity Kochi, 15 km downtown of Kochi, is the first smart city project in India and second in the world by the Tecom Investments group. The state has 16 per cent and Tecom has 84 per cent share in the venture.

According to the agreement signed by the Kerala government and Tecom investments, the project expects an investment of Rs 2,000 crore. The project would be spread over 99.6 ha. On completion, SmartCity Kochi would be one of the largest IT parks in the country. The project is expected to have minimum 8,800,000 sq ft (820,000 m2) of built up space with a minimum of 6,200,000 sq ft (580,000 m2) set aside for IT and IT enabling services. 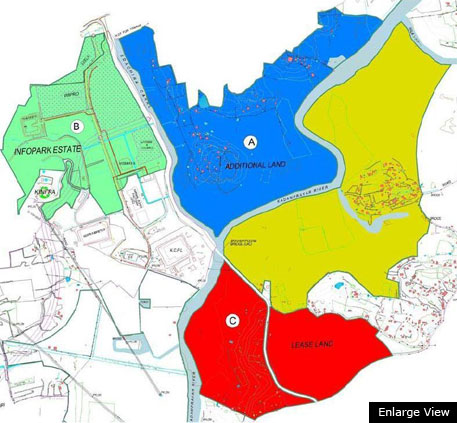 A press statement issued on October 21 by Gigo Joseph, chief executive officer of the project, said that the clearance was given at the meeting of State Environment Impact Assessment Authority (SEIAA), a state-level body under MoEF following recommendations by the State Expert Appraisal Committee.

The environmental clearance for the first phase of the project, which will be opened in March next year, was received in July last year.

“Now we have received clearance for the entire project,” said Joseph. According to him, the project will house Information and Communication Technology (ICT), media, finance and research and innovation clusters, attracting companies from within India and abroad.

“We have also entered into agreements for joint developments with leading IT, hospitality, realty and education companies, to make the hub coming up here an integrated township with facilities for live, work and play. A few of them are already on the verge of starting construction,” added Joseph.

The project claims it would create over 90,000 direct jobs.