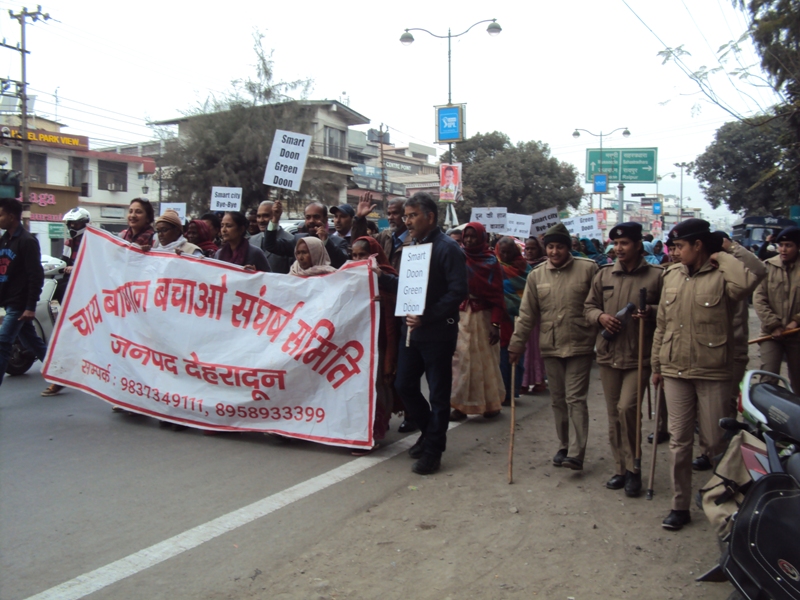 Dehradun may have missed the “smart city” bus in the first round but workers from the Harbanswala tea garden in the city celebrated the lost opportunity by distributing sweets on January 31. They also marched under heavy police presence to protest the state government’s bid for a smart city in place of the tea garden.

“Tea gardens are the lungs of the city. The focus should be on fixing the already existing civic issues like traffic, sewage, and infrastructure and not on constructing a smart city on lush green tea gardens,” said S S Pangtey, a retired IAS officer who attended the event.

On Thursday, the Union urban development ministry announced the first list of 20 cities to be developed as smart cities based on their proposals. While cities like Dehradun failed to make it in the first round, they will have the chance to compete again next year.

“The decision of the Uttarakhand government to go ahead with the smart city is a major blow to those of us who want to protect the earth and its environment,” said Anoop Nautiyal, a political and social activist. Nautiyal was Aam Aadmi Party’s candidate from Tehri Garhwal in the 2014 General elections.

Mussorie Dehradun Development Authority’s smart city draft proposal calls for area-based developments in the greenfield category, focusing on the tea estate region. Nautiyal claims that the tea estate is an area of immense biodiversity with approximately 25,000 trees, flowers, flora, fauna and animals that help to preserve the ecological balance.

Civil society members from Dehradun also met on Sunday and will release a citizens’ declaration against the smart city bid this week.