Illegal structures had mushroomed on Jhelum’s banks and around lakes, clogging drainage channels 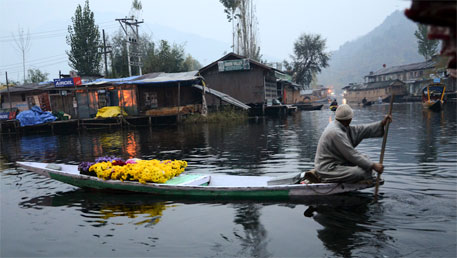 In flood-ravaged Jammu and Kashmir, the streets of the state’s summer capital, Srinagar, resemble surging streams. River Jhelum has been flowing 1.5 metre above the danger mark. Chief engineer with Flood Control and Irrigation Department, Javid Jaffer, says that the state’s river and flood channels could carry 65,000 cusecs (cubic feet per second) of water, while the current discharge is over 90,000 cusecs.

Scientists say that since the drainage channels of the city has been blocked and the link between the lakes has been cut off due to unplanned urbanization and encroachment, the lakes have lost their power absorb water the way they used to a century ago and save the city from floods. The wetlands and lakes act as sponges during floods.

According to a Comptroller and Auditor General of India (CAG) report, the catchment area of the Dal lake is 314 sq km, of which 148 sq km was identified as prone to soil erosion. The open area of the lake had been reduced to 12 sq km from 24 sq km and its average depth also reduced to three metre because of siltation. For this reason the lake’s ability to naturally drain out flood waters has greatly suffered.

At present, with continuous rain for two three days, Srinagar city is flooded by water from the Jhelum river. This would not have happened a few decades back, say Humayun Rashid and Gowhar Naseem of directorate of ecology, environment and remote sensing, who have studied loss of  extent of lakes and wetlands in Srinagar and its effect on the city.

They explain in the study (pdf) that Srinagar’s natural drainage system has collapsed due to the degradation of the network of lakes. The study notes over the years it has been observed that continuous rains for two to three days in Kashmir valley raises flood threat in the Jhelum river. No such risk arose with this much of precipitation two to three decades back. Further, it has also been observed during the last decade that residential areas which never got flooded in the past are getting inundated during floods in the Jhelum. This is because there are hardly any wetlands to hold the excess water, the report states.

In their research paper, Rashid and Naseem explain that deforestation in the Jhelum basin led to excessive siltation in most of the lakes and waterbodies of Srinagar. The comparative change analysis of the two maps based on the year 1911 and 2000 reveal that wetlands like Batmalun Nambal, Rekh-i-Gandakshah and Rakhi-Arat and Rakh-i-Khan and the streams of Doodganga and Nalla Mar have been completely lost while other lakes and wetlands have experienced considerable shrinkage during the last century. The Mar Nalla was lost to a road, Doodhganga nalla was converted into buildings and shopping malls, and Bemina and Batmalo wetlands have been converted into residential colonies. The study also reveals that Lake Anchar , Gilsar Lake, Khushalsar Lake and Brar-i- Nambal water bodies lying in the core area of the city are ecologically degraded and under tremendous pollution load.

The study involved mapping of nearly 69,677 hectares in and around the city centre of Srinagar. The analysis of the historical data set reveals that nearly 13,425.85 ha of land was marshy area while nearly 4,000.50 ha was covered by open water surface in 1911,  making up for a total of 17,426.36 ha. It is the period when Srinagar’s lakes and wetlands formed a network. The built-up land was mostly on either banks of the Jhelum and running north to south of the city centre; its spatial extent was estimated to be 1745.73 hectares.

Spatial extent of Lakes and wetlands of Srinagar during 1911

Similarly, analysis of satellite data by Rashid and Naseem of the year 2004 revealed that there has been tremendous growth in the built-up category during this period which was estimated at 10,791.59 hectares running north-south and towards east of the city centre.

Spatial extent of Lakes and wetlands of Srinagar during  2004

The report highlights that Srinagar city, a century earlier, had a unique ecological setup with extensive areas under wetlands, lakes and water channels. Siltation in the lakes and wetlands especially during floods was natural, but subsequent encroachment, earth filling, planting, and constructions by individuals and converting water channels into roads, presents a living example of how these valuable assets of natural landscape of Srinagar were destroyed. 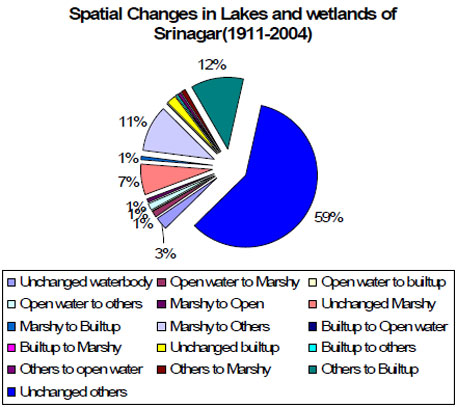 The loss of water bodies of Srinagar has, in fact, a bearing on the microclimate of the city as meteorological data recorded during the past century suggests a rising trend in the mean maximum temperatures during the summers. On July 15, 1973, the highest temperature ever recorded in Srinagar was 35.5 ºC; on July 7, 2006, it rose to 39.5 ºC. It is suggested that the rise in mean annual temperature in the area is mainly due to loss of water bodies, since a considerable amount of evapotranspiration with a cooling effect might have been taking place in the past due to these valuable ecological assets during summers. What’s more, the increase in the built-up land leads to increase in the temperatures during summers due to creation of urban heat islands.

The study does a comparative analysis of mean monthly maximum temperature during the period 1901-1950 and 1979-1996. It shows that mean maximum temperatures have increased from 30.8º C to 32.4ºC in the months of July in the city. This is perceived to be mainly due to loss of water bodies as microclimate of the city stands altered due to undesired land use change.

Other lakes affected, too

Dal lake is not the only lake to be affected. Wullar, one of the largest freshwater lakes in South Asia, also poses a risk of flooding for Srinagar. According to the National Wetland Atlas, the lake reportedly lost 88 per cent of its surface area due to unchecked encroachment over the past few decades. Since all rivers and drains of the valley drain into Wullar, environmentalists fear that the clogged lake could become a cause of a major flood in Kashmir.

Activists question why the river channel was narrowed and the administration allowed people to stay so close to the river? It seems states have hardly learnt lessons from the Uttarakhand disaster in 2013 after which the erstwhile chief minister Vijay Bahuguna reiterated court orders directing the state not to allow construction within 200 metres of rivers.

Encroachment of river banks along the Jhelum had been a bane for Srinagar for several years. A large number of illegal structures had mushroomed along the banks of the Jhelum in north and south Kashmir in Anantnag, Srinagar, Bandipora and Baramulla districts. Illegal construction was rampant in Khanabal bridge, Bijbehara, Sangam, Halmula, Kakpora, Samboora, Guru and Padhgampura. This is despite the fact that J&K Water Resources Regulation and Management Act 2010 strictly prohibits any encroachment on flood control land.

Havoc in the Himalaya