India’s triple transitions—demographic, energy and public health—are major development challenges in the coming few decades. By 2050, the country will add 400 million people in urban areas, which are currently home to 410 million people. By virtue of relatively lower per capita emission, India contributes 6.6 per cent of global greenhouse gas emissions despite being a country of 1.25 billion. But the emission level is going to increase exponentially as direct fallout of the overall development trend. Development leads to reduced short-term morbidity (STM) such as fever, cough and diarrhea, but increasing major morbidity (MM) like diabetes and heart diseases due to a transition from associated traditional risks (unsafe water and sanitation) to modern risks (lifestyle diseases). Before we delve into solving these issues, let us first understand the current situation.

Link between settlement pattern and morbidity

According to a 2015 study titled 'CO2 Emissions from Direct Energy Use of Urban Households in India', household GHG emissions from direct energy use correlate strongly with income and household size. While household-based electricity and private transportation-related energy consumption has increased, the data from the IHDS reveals that both short-term morbidity and major morbidity has also increased over time. Moreover, there is a clear pattern of variation in morbidities based on settlement patterns and income. Settlement patterns with greater urbanisation have lower prevalence of short-term morbidity but higher prevalence of major morbidity. Just like urbanisation, the prevalence of STM is inversely proportional to income, with increasing income leading to a decrease in STM. Increasing income also leads to increasing prevalence of MM as well as energy spending. 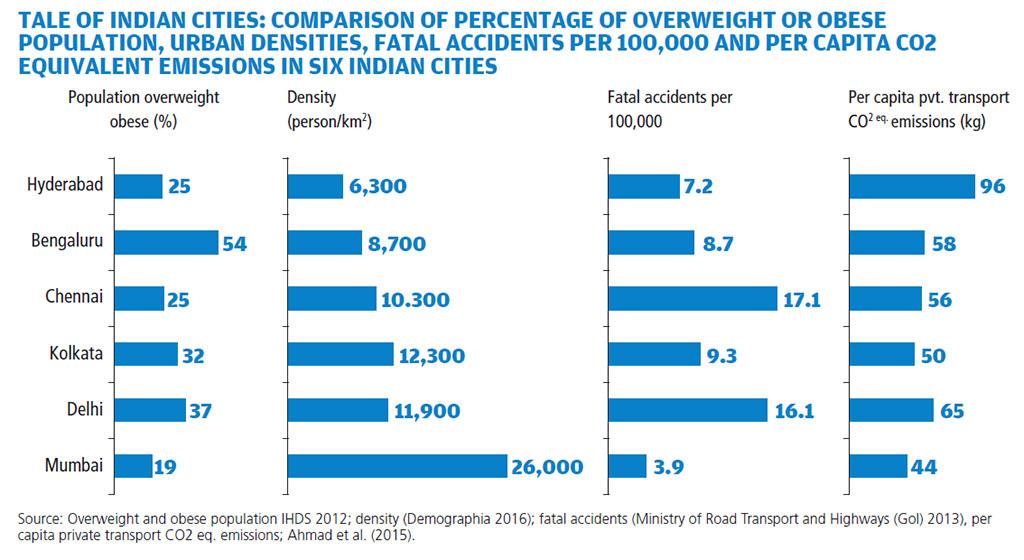 Densification could alter related morbidity risks and therefore, could influence health and environmental outcomes (See: Tale of Indian cities). For instance, out of the six largest state capitals, which are also the largest cities in India, Mumbai has the highest density. This explains increased use of public transportation and reduction in fatal accidents and CO2 emissions from private transport. This could correlate to reduced share of overweight or obese population in Mumbai, probably because of increasing physical activity from non-motorised transportation. Mark Stevenson of Melbourne School of Population and Global Health, in his 2016 study, has convincingly estimated co-benefits of compact city, by quantifying public health gains and reduced emissions as a result of densification in six global cities, including Delhi.

To sum it up, between 2005 and 2012, STM (4.2 per cent), MM (8.5 per cent) and emissions (≈50 per cent) have increased. Non-motorised transport, particularly cycling, emerges as a “sweet spot” for sustainable development, which reduces emissions and morbidities. Urbanisation and access to household infrastructure play an important role in reducing short-term morbidity. There is limited evidence of socio-economic and built environment interventions reducing major morbidity, except in case of the transport sector, as stated above. Higher taxes on gasoline and diesel to finance public transport and non-motorised transport infrastructure could benefit public health and climate. Unlike gasoline and diesel, taxes on electricity would be counterproductive, since adequate access to improved household infrastructure and cleaner cooking fuels is needed for better quality of life.

(This article was published in the State of India's Environment 2018)