US undermines scientists in assessing chemicals 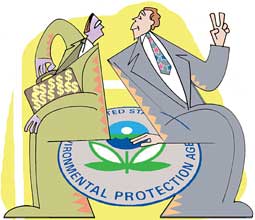 The politicization of uss Environmental Protection Agency (epa) has reached its acme. On April 10, the epa announced a new procedure to assess toxicity of chemicals. epa in its new avatar gives greater say to government agencies and corporate groups, and undermines scientists and public health professionals.

The changes proposed by the epa became effective the day they were announced. However, according to a report of the Government Accounting Office (gao), the investigative arm of the us Congress charged with examining matters relating to the receipt and payment of public funds, epa scientists began facing speed bumps once the process to review procedures to assess toxic chemicals commenced in 2004.

The changes announced on April 10 amended procedures of the Integrated Risk Information System (iris), which establishes safe levels for toxic chemicals in the us ( see box: The risk database). According to epa, the changes will create several opportunities for affected interests to weigh in at key points throughout the nomination and assessment of new environmental contaminants. The Public Employees for Environmental Responsibility, a non-profit alliance of us- government affiliated scientists and law enforcement officers, has a better description for the amendments. The changes will increase corporate and political influence in public health decisions, which should be purely scientific. Affected corporations will be intimately involved in each step of epas risk assessment procedures, making the agencys work vulnerable to manipulation, representatives of the alliance said.

Among the changes is greater say for the White Houses Office of Management and Budget (omb) in the scientific assessment process. omb, which could earlier only critique policies during the mandatory regulatory review period can now intervene at every level of assessment, effectively controlling the substance and timing of all decisions on chemical risk assessments. The changes evoked outrage from Senates Committee on Environmental and Public Works. Barbara Box, the committees chairperson said, These changes to epas risk assessment programme are devastating. They put politics before science by letting the White House and federal polluters derail epas scientific assessment of toxic chemicals.

The new procedure requires that the White House and the Department of Defense (dod)which contracts out much of its weapons programmesapprove any risk assessment before it is made public. The debates between the epa and the other government agencies during the assessment process will be kept secret, which according to gao and epa scientists will undermine the credibility of epas scientific assessments.

According to gao, political involvement in epas risk assessment process has already derailed the risk assessment for tce, a solvent that is the most common organic groundwater contaminant in the us, and which causes cancer and birth defects. Similarly, gao also found extraordinary delays in risk assessment process for formaldehyde, a chemical in plywood and many consumer products that has been linked to leukaemia and other cancers. John Stephenson, gaos director of natural resource programmes, told the Senate Environment Committee that the White House omb is not only closely involved in the chemical assessments but actually dictating which assessments epa can undertake.

There has been some protest. In a joint letter, Natural Resource Defense Council and Environmental Defense, two leading environmental groups have called on epa to abandon the changes. Instead, it recommended the agency to provide sufficient resources for the iris programme to conduct rigorous, independent and timely assessment of chemicals that impact human health and the environment.