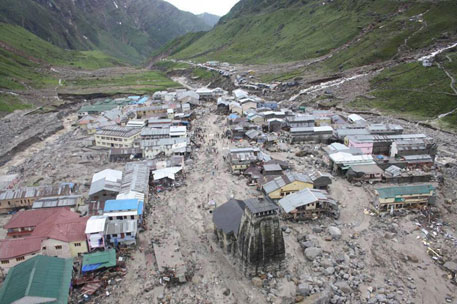 The National Institute of Disaster Management (NIDM), in one of its first reports on the Uttarakhand floods, has blamed “climatic conditions combined with haphazard human intervention” in the hills for the disaster.

Surya Prakash, associate professor of NIDM, travelled over a 1,000 kilometres in flood- and landslide-hit areas of Uttarakhand between June 22 and 24 to prepare the report. He says that the abnormally high amount of rain (more than 400 per cent) in the hill state was caused by the fusion of Westerlies with the monsoonal cloud system. Heavy precipitation swelled rivers, both in the upstream as well as downstream areas. Besides the rain water, a huge quantity of water was probably released from melting of ice and glaciers due to high temperatures during the month of May and June. The water not only filled up the lakes and rivers that overflowed but also may have caused breaching of moraine dammed lakes in the upper reaches of the valley, particularly during the late evening on  June 16 and on June 17, killing about several hundred persons; thousands went missing and about 100,000 pilgrims were trapped.

Prakash says that the Alaknanda river and the Mandakini, both tributaries of the Ganga), occupied their flood ways and started flowing along the old courses where habitations were built over time (when the river had abandoned this course and shifted its path to the east side). Thus, the rivers destroyed the buildings and other infrastructure that came in its way.

He explains that geomorphological study of the area indicates that the surface slopes consist mostly of glacial, fluvio-glacial, or fluvial materials, which are mostly unconsolidated and loose in nature. The drainage studies indicate a migratory or shifting nature of the river systems that causes aggradations on the concave end of the river and degradation or toe erosion on the convex part of the river. Due to morphological setting of the area, the river has high sinuosity and hence, high level of erosive capacity, especially when it is loaded with sediments (the erosive power of river with sediments is almost square of the erosive power without sediments). 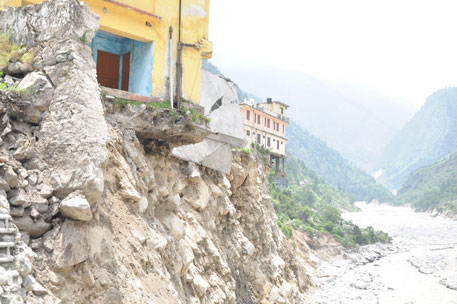 “The area has been denuded to a great extent due to deforestation and tree cutting for road construction, and other activities such as building construction, mining and hydel projects. It has also resulted in increased surface flow and rise of river bed due to disposal of debris in the rivers,” the report said. Geologically, the rocks in this area are found highly deformed, degraded and dissected by structural discontinuities and drainages.

Seismo-tectonically, the area is traversed by several lineaments, faults and thrusts, which are considered to be geodynamically active. The area had suffered an earthquake on March 29, 1999 (M-6.8), which caused loosening of rock masses, ground cracks and landslides, besides killing more than a 100 people due to collapse of buildings. Thus, the natural terrain conditions combined with climatic/weather conditions and haphazard human intervention made a conducive environment for such a hazardous process to take place in this valley, said Prakash.

“The hazard turned into a major disaster when people along with their properties and infrastructure occupied such areas without adequate information, knowledge, awareness and preparedness against the potential disaster,” he added.

The main objective of Prakash's visit to the affected areas was to observe the major damages along the national highway from Rishikesh to Chamoli and interact with people, including victims, relief workers and local people to learn about the event and its impacts.

Based on the field observation, Prakash has suggested terrestrial, meteorological and anthropogenic data with particular focus on landslides, rainfall and other information relevant to the event should be collected and compiled. “Necessary guidelines and action plans for tourist/pilgrimage places and hotels,lodges and guest houses should be developed keeping in mind the concentration of people at such locations during the time of disasters,” he says.