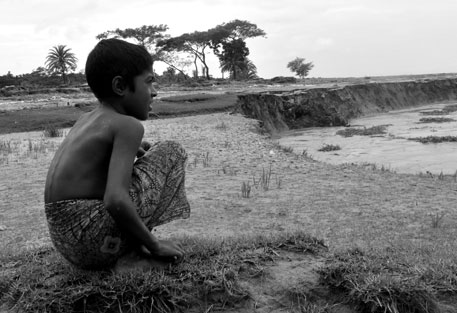 The tranquility on the banks of the Meghna river in Bhola gives no inkling of the scale of destruction this island district in Bangladesh has undergone. Over the past few years, it has been victim of severe erosion and storm surges. Result: a major part of it is has gone under water. “The island may just disappear in about 25 years.” This is what Rezaul Karim Chowdhury of non-profit Coastal Association for Social Transformation Trust (COAST) had said before this correspondent set out for the only island district of Bangladesh. Broken shores, half-drowned settlements and hundreds of makeshift shelters standing on barely two-metre wide strips of land resonated Chowdhury’s words.

Bhola stands as an example of the climate calamity that is wrecking Bangladesh. The country has 47,211 sq km of coastal area—32 per cent of the total land mass of the country. The United Nations Development Programme (UNDP) has identified Bangladesh as “most vulnerable” to tropical cyclones. The greatest damage from cyclones is inundation caused by storm surges—temporary increase in the sea level in a particular area because of extreme meteorological conditions such as low atmospheric pressure or strong winds (see box: Climate impact threatens islands).

Like many islands in the coastal areas of Bangladesh, cyclone is among the primary natural disasters that visit Bhola. The district, which is bordered by the Meghna and Tetulia rivers and the Bay of Bengal, experiences two to four metre high storm surges. It has a total area of 205,115 hectares (ha). It has nearly 1.8 million people, and most of them depend on fishing or agriculture to earn a living.

Officials in the Ministry of Water Resources say the standard method of protecting the district from storm surges is by raising two to three feet high earthen embankments around the district. Embankments protect 143,465 ha, about 70 per cent of the total area. But a large part of the district, especially Dhal Char and Char Kukri Mukri, are not protected by embankments and are extremely vulnerable to erosion. Many parts of the earthen embankments are also eroding every year, increasing vulnerability of the islands to submergence. People fear the embankments will not sustain for long. 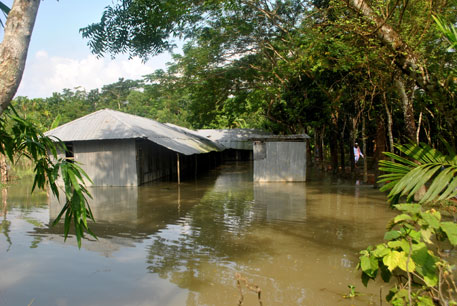 Murubbi, an elderly person in Burhanuddin, a sub-division of Bhola district, says erosion and inundation has aggravated in the recent past. “Storm surges were a common phenomenon even in the past, but the water would recede soon. Now, water takes many months to recede. Over the years, cyclones have become more frequent with far-reaching impacts,” he says.

In Charfasson, sub-division of Bhola bordering the Bay of Bengal, the government placed stone blocks and sandbags in some parts along the riverbank as a measure of protection. The blocks were placed mostly after the devastation caused by Aila in 2009, says fisher Mohammed Shohar. But the work is incomplete, he adds.

Mizan Rahman of COAST, working in Bhola for the past 10 years, points out the stark difference in the scale of erosion in places in Burhanuddin where blocks have been placed and the places where they are absent. Clearly, the blocks have arrested erosion, whereas sharp land erosion is visible in areas that have been left open.

About 150 km from Bhola, Kutubdia island in the Bay of Bengal presents an equally grim picture. Located west of tourist destination Cox’s Bazar, it is home to about 100,000 people. Natural disasters in Kutubdia are also primarily induced by cyclones. “The 1991 cyclone claimed more than 8,000 lives and prompted thousands more to migrate to the mainland of Cox’s Bazar,” says Ruby Islam. She lives in Kutubdia para, a small colony in Cox’s Bazar inhabited by survivors of the 1991 cyclone. Ruby now teaches in a primary school. Nearly 40,000 people live in Kutubdia para, she says. 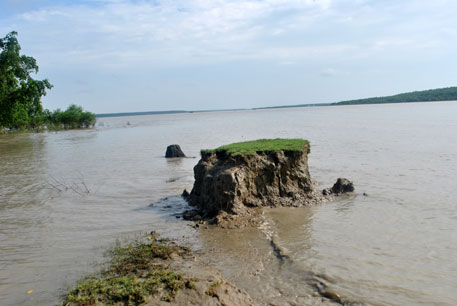 The 1991 disaster was not the end of the ordeal for Kutubdia. Cyclones with two- to four-metre-high tidal surges hit the island every year. It is estimated that between 1970 and 2010, Kutubdia has lost 900 ha of its land mass. Its southern end is particularly disturbed by coastal erosion. “Ten villages of Ali Akbar Dale Union in the southern end of the island have simply disappeared over the past 30 years because of cyclonic storm surges,” says Moqbul Ahmed, resident of Cox’s Bazar and regional coordinator of COAST.

Yet measures to protect the island are barely visible in Kutubdia. The planning division of the Ministry of Water Resources acknowledges lack of planning and action. Draft of the district development plan, prepared by the ministry as part of the Integrated Coastal Zone Management Project, mentions mangrove plantation initiative and embankment construction undertaken to stabilise the island.

But the mangroves are being gradually destroyed by shrimp culture practices, says Mohammad Shafiuddin, coordinator of fisheries development of COAST. Residents of Kutubdia are primarily involved in salt-making and dry fisheries. They have started exploring economically lucrative shrimp farming as a profession. Such activities require clearing of mangroves for fish ponds, which make the area even more vulnerable.

Climate change will increase inundation three times by 2050, jeopardising the lives of millions of people living along the coastal areas of Bangladesh, a World Bank study states. The areas which are severely affected by flood and tidal surges are also typically the most economically distressed. The World Bank study clearly shows that the coastal areas of Bhola and Cox’s Bazar have the highest poverty head count ratio (HCR) in the country. HCR is the percentage of population living below the national poverty line. In these areas, HCR is greater than 55 per cent. Frequent cyclones leading to inundation has affected the livelihood of fisher people and farmers here. 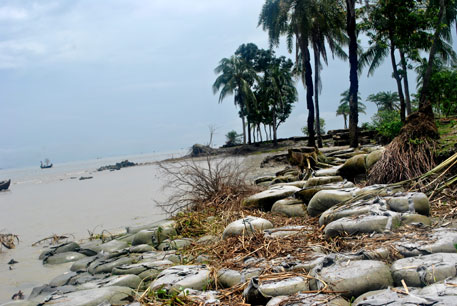 In Bhola, agricultural land was inundated in May. Water has not receded even after five months. According to the agriculture department of Burhanuddin, 84 per cent of the agricultural land is submerged in the sub-division. “People have no yield from this season and cannot sow their paddy fields for the next season,” says Rahman of COAST. They have no choice but to migrate to Dhaka and Chittagong. In the past three months, more than 100,000 people have migrated from Burhanuddin alone, he says.

Aarzoo Bibi, resident of Burhanuddin complains that no government official has visited the area since it was inundated in May this year. She vehemently protests when asked about government aid. “Any aid will last only for a few days. What will we do after that?” she asks. People want immediate mitigation measures from the government, she adds.

The ongoing Conference of Parties (COP 19) to the United Nations' Framework Convention on Climate Change (UNFCCC) in Warsaw, Poland has once again set the table to discuss the imminent threats of climate change. About 10,000 people are expected to debate, negotiate and possibly try to find a solution to this global problem. A deadline was already set at COP18 in Doha for agreeing upon a new global climate deal for all countries by 2015 (COP 21 in Paris) and to take effect in 2020. But can the vanishing islands of Bangladesh survive such long drawn negotiations?

Given the situation on the ground, the call for action is clearly more urgent. Besides co-operation on part of the global community, the country also requires its own government institutions to be more proactive and transparent in addressing the problem. According to the Bangladesh Centre for Advanced Studies, a policy research non-profit, given the inefficient government institutions and their weak financial capacity, mitigation measures may be difficult. Choudhury says allocation of funds is also hindering work. “Nearly 300 million taka earmarked for Climate Change Trust Fund is lying with the government. It should allocate this fund for mitigation efforts on a priority basis,” he says.

The Water Resources and Planning Organization under the Ministry of Water Resources formulated the Coastal Zone Management Policy in 2005, in part to address the problems from disasters such as cyclone, drainage congestion and erosion. The policy mentions the need for maintaining sea dykes, building multi-purpose embankments, and undertaking afforestation in coastal area. But Nilufa Islam, technical director of the Water Resources Planning Organisation, says the policy is still largely in paper and far from implementation.

The tempest of exodus: the case of climate change-induced displacement in Bangladesh and international negotiations