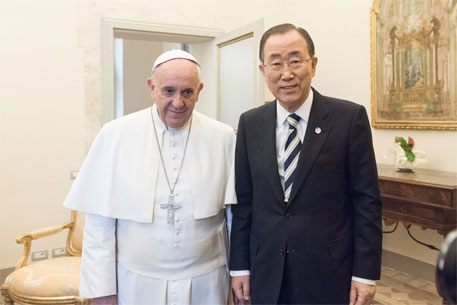 The Vatican and the United Nations have joined hands to warn the world against the hazards of following an economic growth path that is ruinous for the world.

The warning followed a workshop organised on Tuesday by Pontifical Science Academy, called “Protect the Earth, Dignify Humanity”, to explore the moral dimensions of climate change and sustainable humanity. One after the other, speakers at the workshop emphasised the need to protect Mother Nature for future generations. The Academy said that nations were measuring their wealth by GDP (Gross Domestic Product), taking no account of the harm caused by business practices, according to a BBC report.

Cambridge economics professor, Partha Dasgupta, was quoted by the news report as saying, "GDP is a disgraceful index because it does not count depreciation of our assets - including damage to Mother Nature, the most fundamental asset we have.”

United Nations Secretary-General, Ban Ki-moon, and Pope Francis discussed climate change among other things on the margins of the workshop.  The Pope is due to make a major address on sustainable development at the United Nations in September and has said he believes man is primarily responsible for climate change, according to a Reuters report. The views expressed at the workshop are likely to influence the Pope’s Encyclical—an official statement—on climate change. The UN secretary-general said he was looking forward to the encyclical.

Cardinal Peter Turkson, who helped write the coming encyclical was quoted by BBC , saying, "For humans to degrade the integrity of the Earth by constant changes in its climate; by stripping its natural forests; to contaminate Earth's water, land and air with poisonous substances - all of these are sins.”