Village gets community rights over forest submerged by dam

A portion of reservoir given for management and fishing

In what could prove to be an important precedent for the implementation of Forest Rights Act, a Korku tribal village has received community forest rights (CFR) claim over a portion of the reservoir of Sapan dam in Chikhaldara tehsil of Amravati district in Maharashtra. The Act gives communities rights over forest and its resources, and the village, Jaitadehi, has received CFR over 66 hectares (ha) of forestland, out of which 23 ha was submerged by the dam.

On January 29, after much struggle by villagers, the portion of the reservoir was finally demarcated and handed over to the village for fishing and management by the district administration.

While on the one hand this marks a landmark of sorts, it also remains to be seen how fishing rights are managed, as the remaining portion of the reservoir is contracted out to a different fishing society, and it is very difficult to demarcate either water or fish. 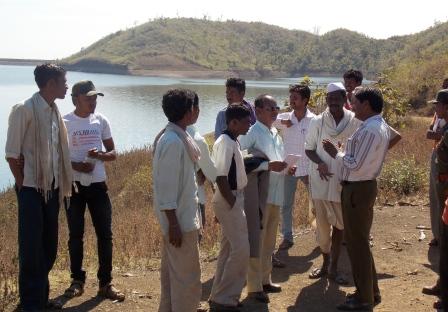 Some 80 Korku families of village Jaitadehi lost all their agricultural and forestland to the Sapan dam in 2005-06. The Korkus were forcibly shifted to the borders of the neighbouring Achalpur tehsil. As a result, says Purnima Upadhyaya of the non-profit Khoj, the village lost all its resources including 100 ha of agricultural land and 66 ha of forest. Khoj helped the village organise for CFR rights. “These 80-odd households were once rich farmers who sold truck-loads of cotton and chilly, but today they are totally dependent on manual labour,” says Upadhyaya. “They were packed off with a pittance of Rs 6,000 per acre (one are equals 0.6 ha), and after being moved to Achalpur, they also lost whatever rights they had in Chikaldara, which falls in the scheduled area. They could not even get NREGA work as their job cards were from Chikaldara.”

Sanu Mannu Bethekar, community leader of the village, says, “We wrote to the administration, demanding land, but till date no decision has been taken on a 35-40 ha patch of fallow land that we had staked claim over. We have absolutely no livelihood sources.”

CFR to the rescue

Things changed for the better after the village filed its CFR claim with the help of non-profit Khoj and others. However, despite being granted CFR over part of the reservoir in August 2013, the village could not exercise its rights, as the entire reservoir had already been leased out to a different fishing society. “Neither the fisheries department nor the other society were aware of CFR, and refused to recognise the rights of the village,” says Upadhyaya.

The village then wrote to the district level committee, seeking clarification on the status of the reservoir. Several meetings with different departments later, the situation finally became clear, and recently, the fisheries department recognised the rights of the village.

The village has received Rs 50,000 aid from the Integrated Tribal Development Project (ITDP) for fish seed, nets and boats, informed Upadhyaya. Bethekar, however, feels that government should provide training in fishing skills to villagers. “We have formed a fishers’ cooperative and opened a bank account,” says he. “About half of the villagers have know-how and skills of fishing, and if the rest of us also get training, the reservoir will become a good livelihood source for us.”

Upadhyaya says efforts will be made to form a cooperative of all the villages displaced by the dam, which can then get rights over the entire reservoir. “Jaitadehi’s success is the first step in this direction,” said she.