Village refuses to part with forest 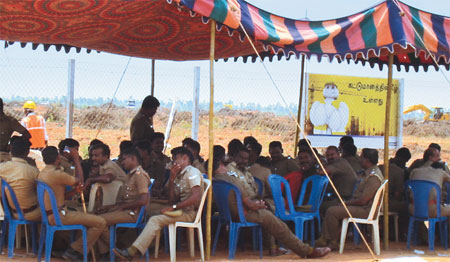 THERVOY Kandigai village, 50 km northwest of Chennai in Thiruvallur district, is planning another protest against the Tamil Nadu government’s plan to set up an industrial estate on its 405 hectares (ha) of common forestland. People were encouraged by the recent Supreme Court ruling declaring the transfer of common land for private or commercial development illegal (see ‘Return of village land’, Down To Earth, February 16-28, 2011).

French multinational Michelin plans to open a tyre manufacturing company; Harsha Glass, a glass manufacturing factory; and Tropical Breweries, a beer distillery in the estate promoted by the State Industries Promotion Corporation of Tamil Nadu (SIPCOT), a government body. Michelin has already begun construction under tight police vigil and has cleared all vegetation. “The police patrol here round the clock since our hunger strike last month. They do not let us gather in groups of even three or four,” says S Mariamma, a resident of Thervoy.

“We have approached the district collector, police, elected representatives, and SIPCOT several times since 2007 when we first heard about the project, but to no avail,” says K Mahesh, spokes­person for the struggle. “We also staged protests and hunger strikes but all that happened was we were arrested and false cases foisted on us,” he adds. When Down To Earth spoke to the executive director of SIPCOT, S Natarajan, he refused to talk saying, “Everything is going smoothly. There is no problem.” Nicolas Beaumont, managing director of Michelin India, says, “When we decided to set up a facility in Tamil Nadu the state proposed this site. We were under the impression that all legal steps to acquire the land had been followed.”

Beyond the village and the police resting in the shadow of their vans, runs a newly laid mud road leading up a gentle slope to SIPCOT’s project site. “Till a year ago, a channel flowed down from the forest to feed three irrigation lakes down that way,” says B Thiruvarasu, a Thervoy resident, pointing to fields in the distance. Now, with the trees gone and the area fenced, the channel is blocked, reducing flow; one lake has been filled with excavated soil, he adds.

We have depended on the forest to graze livestock and for fruits, herbs and firewood for centuries, recalls E Panchalam, an elderly in the village. “We have protected this forest for generations. We collect whatever we need but cannot cut any tree. Four men patrol the forests and each family pays them four padis (6 kg) of rice per year,” says Mariamma.

The 5,000-strong community is chary of the state’s assurance that the industrial estate will generate employment. “A paper factory nearby did not provide us employment, so why would we believe that these new units will? If at all, it will offer us unskilled jobs,” says Mahesh. He adds, “We are farmers and are content with the 1,200 ha of agricultural land, our forest and our freedom.”

Discontent is brewing also because the government is yet to implement the high court order of September 2009, which directed it to put aside 40.5 ha of the 405 ha and develop it as grazing land. It had also asked to develop another 182 ha within the village and 121 ha in a neighbouring district as grazing land and relocate 16 families who lost their homesteads to the project. “None of these orders have been followed,” says Mahesh. The 182 ha of grazing land within the village is actually the commons on which we have been doing social forestry for ages. “How can they give us the land that belongs to us? And what is the point of finding land in another district for us? It is impractical,” he adds.

Activists say SIPCOT has flouted environmental norms. It got clearance from the environment ministry in August 2010 on the condition that work should begin only after getting “consent to establish” from the state pollution control board. The community and activists claim the construction began before the consent. Michelin does not have environmental clearance though it has consent to establish. “The government has given a go-ahead to the SIPCOT project despite opposition at the public hearing,” says Madhumita Dutta of the Movement Against Special Economic Zones in Tamil Nadu.Industries to pay for pollution study
News News News Thiruvallur (D) Tamil Nadu Special Economic … Relocation Public Hearing Land Acquisition Land Industry Industry High Court Grazing Lands Grazing Lands Forests Forests Conflicts Conflicts Common Property …
SUPPORT US