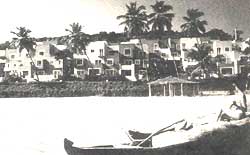 A COMMITTEE that has been reviewing regulations governing coastal tourism recommends that decision-making in these matters should be left to the states concerned because they "are aware of the local constraints and the extent of demand for beach tourism" and it was upto state officials to determine how best to use their beaches. Coastline states and hotel industry representatives have been pleading for a relaxation of the stringent rules that now apply to beach tourism.

B.B. Vohra, who heads the review panel, which has yet to submit its report to the government, told Down To Earth that a pragmatic approach needs to be taken to the problem. "There cannot be a blanket ban for the entire coastal belt. It is the sandy beach that needs extra protection and not the rocky stretches. Therefore, it is better to have different sets of rules for different types of coasts."

A notification issued last year, under the Environment Protection Act of 1986, imposed restrictions on coastal tourism development activities so as to protect the environment. The hotel industry, however, objected strenuously, arguing that regulations would cramp the exclusive style of the beach holiday resorts and multi-starred hotels and reduce the attraction of beach holiday in India for foreign tourists. K Kumar of the federation of hotels' and restaurants' associations of India, New Delhi, says, "In the world of competitive tourism, it is not possible to attract foreign tourists if we have to cope with so many restrictions." Goa, Maharashtra and Kerala feared a drastic fall in revenue from beach tourism. The Vohra committee was set up in response to this criticism. Environmental groups, however, objected to any dilution of the regulations, under which development activities are restricted to varying degrees upto 500 m from the high tide line (HTL).

The hotel owners want the beach area between the hotel site and the shore line exclusively for unhindered recreation of the guests. The Kerala government has reportedly argued that if hotel owners were expected to buy up more land to ensure privacy for the tourists, the cost of the project would be prohibitive. There are other contentious issues, such as permission for drawing groundwater, disposal of waste and sewage, regulation of rivers in delta regions which also get affected by tidal waves, and finally, the definition of HTL.

But there are no guidelines that can be uniformly applied. Even with respect to the drawing of groundwater, Vohra says, "Rules cannot be simplified for the entire coast. Cases should be judged on their own merits." However, he is in favour of very strict norms for waste disposal: "Why only five-star hotels, proper sanitation facilities should be provided in the beaches even for common tourists."

Environmental groups like the Goa Foundation are resisting any modification of rules in the interest of coastal ecology. But officials in the ministry of environment and forests say, "For the state governments, this is not even an environmental issue. Most of the states concerned have sent tourism ministers and not environment ministers to represent their cases."

Development activities in coastal areas were restricted in 1982 at the instance of the then Prime Minister, Indira Gandhi, within 500 m of the HTL. This was relaxed by the Rajiv Gandhi government to 200 m in 1985 only for Goa, Thiruvananthapuram, Mahabalipuram and Puri in the interest of tourism. An elaborate notification was issued in February 1991, to protect the biological diversity of the coast and its aesthetic appeal, and keep it free of development and obstacles in the way of easy access to seafarers and fisherfolk. This kept the hotel industry away from the beaches and almost all the big names in the hotel business, particularly in Goa, have objected to these regulations. Kumar asks, "When the slogan for beach tourism the world over is 'Jump to the sea from the lobby,' how can you keep hotels away from the sea in India?"