Can India manage its toxic e-waste?

One of the biggest producers of e-waste in the world, India doesn't have data and monitoring mechanisms to manage e-waste 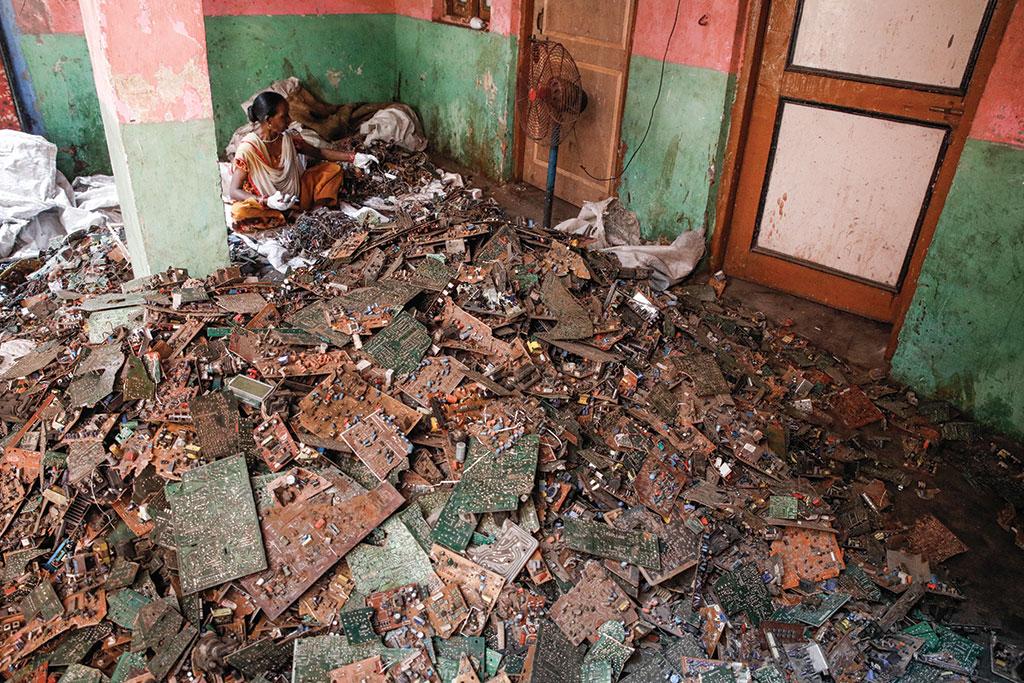 Moradabad is one of India's major e-waste recycling hubs and employs about 0.2 million people in the sector (Photo: Vikas Choudhary)

How do most of us dispose of a mobile phone or a television set? Usually, by selling it to a scrap dealer. But as per the E-Waste Management Rules, which were notified in October 2016, manufacturers of electric and electronic equipments must facilitate their collection and return it to authorised dismantlers or recyclers. However, even one and a half years after the law was passed, there is little evidence that it is being implemented.

The matter came to light in March 2018 when the Delhi High Court was hearing a petition on solid waste management. The court asked Sunita Narain, director general of the Centre for Science and Environment, a Delhi-based non-profit, to submit a report on the status of e-waste in the country. While giving its interim order on May 22, the court directed the Union Ministry of Environment, Forest and Climate Change (MOEF&CC) “to devise a proper method of inventorization of e-waste” and come up with “a strategy and plan” for the proper management of e-waste in a time-bound manner. The MOEF&CC has to now submit a status report within eight weeks.

India is one of the biggest producers of e-waste in the world. The Global E-waste Monitor 2017, published by the United Nations University, states that India generates about 2 million tonnes of e-waste annually and ranks fifth among e-waste producing countries, after the US, China, Japan and Germany. However, there is no government data on e-waste generated in the country. According to a reply given by Anil Madhav Dave, former Union environment minister in the Rajya Sabha on March 23, 2017, the Central Pollution Control Board (CPCB) had projected in 2005 that by 2010, India would generate 0.8 million tonnes of e-waste. Since then, no projection has been made. The 2016 law tasks the state pollution control boards (SPCBs) to make the estimates, but no SPCB has done that as yet.

The law says that producers of electronic items should provide postal address, e-mail and toll-free numbers of collection centres—where consumers can drop their equipments—through websites and produceruser booklet to facilitate the return of e-waste items. The law details different mechanisms to collect and recycle e-waste. These include deposit return schemes (where the producer takes a surcharge at the time of the sale and refunds it when the customer returns the product) and exchange schemes. The stakeholders—producers (all brand owners, makers and importers), manufacturers (all registered companies that make electronic goods), dismantlers and recyclers—have to obtain an authorisation for their operations. The producers must obtain an Extended Producer Responsibility (EPR) authorisation from CPCB which will ensure that they channelise the e-waste to the recycler/dismantler and meet their annual collection targets. The producers have to meet targets, which should be 20 per cent of the waste generated by their sales.

This will increase by 10 per cent annually for the next five years. Both the dismantlers and recyclers must file reports to SPCB to certify that they have used scientific methods in their operations.

In the first year of its implementation, though all companies claimed to have met their targets, there is no mechanism to verify their claims. The law states that CPCB and SPCBs have to conduct random checks on those who have been granted authorisations, but CPCB did not respond to Down To Earth on the number of checks it has conducted so far.

According to CPCB, there are 214 authorised recyclers/dismantlers in India. In 2016-17, they treated only 0.036 million tonne of India’s 2 million tonnes of e-waste. According to many studies, about 95 per cent of India’s e-waste is recycled in the informal sector and in a crude manner.

The process includes manual dismantling, separation and shredding; unsafe removal and collection of solder by heating; acidic extraction of metals; and, burning of waste to remove combustible plastics and isolating metals. These cause severe pollution in air, water and soil and severely affects the worker’s health (see ‘Informal and invisible’).

What adds to India’s problems is illegally imported e-waste. Here too, the government has no record, but as per the Manufacturers’ Association for Information Technology, an industry body representing the information-technology sector, the country received about 50,000 tonnes in 2007. A 2015 report by the United Nations Environment Programme says that China, India Malaysia and Pakistan are the main destinations for large-scale shipments of hazardous wastes, including e-waste, in Asia.

Ironically, according to the Hazardous and Other Wastes (Management and Trans-boundary) Rules, 2016, importing e-waste for disposal is banned in India. For recycling, a prior permission from the government is required and in the last five years, the government has given no such permission, said Dave in the Rajya Sabha reply. It is allowed only for refurbishing of second-hand products. However, the nodal agency, the Central Board of Excise and Customs, lacks the human resource and the infrastructure to distinguish between a second-hand product and e-waste. Even if the law allows the import of second-hand products for refurbishing, many terms and conditions are attached. They have to be re-exported to the country of origin in 1-3 years.

However, according to MOEF&CC officials, there is no mechanism to check whether they have been reexported or not. What’s worse, even if a fraud is detected the law is silent on the penal clause. Priti Mahesh, the chief programme coordinator of Delhi-based non-profit Toxics Link, says, “The law looks good only on paper. But lack of monitoring and poor implementation has made a mockery of the law.”