Roadblocks for bio-toilets in India

Bio-toilets are gaining ground. But emerging challenges could defeat the purpose 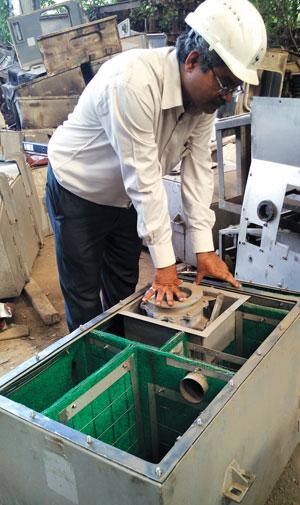 EVER SINCE India’s first bio-toilet was installed by the Defence Research & Development Organisation (DRDO) at its Defence Institute of High Altitude Research in Leh in 1994, there has been an unprecedented interest in bio-toilets. The Indian Railways will install 140,000 bio-toilets in its coaches in the next three years. Lakshadweep has placed an order of 12,000 bio-toilets. And in February this year, the National Green Tribunal made it mandatory for beach camp operators in Rishikesh to install bio-toilets (see ‘Dry season...’). As the technology gains traction across different regions and sectors, many challenges have come to the fore.

Simply put, a bio-toilet is a toilet attached to a fermentation tank containing a liquid consortium of specially developed bacteria—aerobic or anaerobic. DRDO’s technology uses anaerobic (psychrophilic or cold loving) bacteria—specially brought from Antarctica—and a metal/fibre-reinforced plastic fermentation tank. The other technology uses an enzyme along with aerobic bacteria, which are mostly imported.

But both technologies face immense scientific challenges. DRDO has commercialised the technology with a lab study, but they have not taken into account the field kinetics, which differ from place to place. There is little clarity as to where it can work or when it can work. It also depends on the number of users. Significantly, the regulatory bodies have not approved both the technologies.

The problem begins with bacteria procurement. A private player manufacturing aerobic bio-toilets must obtain permission from the National Biodiversity Authority (NBA), Chennai, to import the bacteria, but most private players do not have such permissions, or are extremely secretive about their operations. Take for instance, Bio2, a company that claims to have developed its own technology. It uses a bacteria mix, some of which are imported from New Zealand. However, the company refused to divulge details about import permissions from NBA. Or take the case of Iota Engineering Corporation (IEC), which is not a DRDO licence holder, but sells its bio-toilets as a DRDO product. “We purchase the inoculum from DRDO each time we manufacture a new bio-toilet,” says Inder Singh of IEC.

Stone India, a Kolkata-based company, which recently bagged an order worth Rs 28.7 crore from the Chhattisgarh government for manufacturing 9,090 bio-toilet units, has not disclosed where they source the bacteria from. A company representative first said they source it from NASA, and later clarified that they source it from Indian biotech companies. They are yet to disclose the name of the Indian companies.

Swaranjit Singh, a senior principal scientist at the Institute of Microbial Technology, Chandigarh, says a manufacturer may use a general constortium for varying climatic conditions, but it will not be as efficient as an inoculum custom-made for a given climate. For instance, an analysis of DRDO bio-toilets installed at the Nunwan and Baltal base camps of the Amarnath yatra in 2012 by the Centre for Science and Environment (CSE), a Delhi-based non-profit, revealed that the bacteria used was not suitable to the region’s temperature. “The effluents need to meet the standards set by the Central Pollution Control Board (CPCB),” says D D Basu, advisor, CSE.

A former DRDO scientist who does not wish to be named says DRDO’s bio-toilets installed in the plains don’t require psychrophilic bacteria from Antarctica. Instead, cow dung cakes could be used.

In many cases, usage exceeds capacity. In West Bengal, DRDO installed bio-toilets for a pilot project. But they are being dismantled because of the restrictions on the number of usages.

“We calculate the size/volume of bio-digesters depending on the number of usages. If the bio-digester is undersize, there will be over-usage and the functioning of the digester will be affected,” says Ambika Khanna of Alfa NextGen, a DRDO licence holder manufacturing bio-toilets. On the flip side, unused toilets can also cause problems. If a bio-toilet is left unused for many months, the bacteria feeding on human faeces would die, and the bio-toilet would have to be fed a fresh batch of bacteria, which would translate into additional costs for the user. DRDO’s toilets were tested for shelf-life, by starving the bacteria for six months, and it was found that the bacteria had survived without food for six months. But no tests have been conducted beyond six months. As compared to anaerobic technology, the aerobic technology requires repeated addition of bacteria, otherwise it generates a foul smell and more sludge.

Another problem is portability. A typical bio-toilet weighs about 100-200 kg. “After usage it tends to get heavy and has to be machine lifted,” says Khanna. Yousuf Zaheer, owner of a rafting camp in Rishikesh, says, “There are additional costs for employing technical experts who would have to be flown in to periodically check the parameters set by CPCB.”

A major challenge is the safe disposal or re-use of the liquid that emanates from a bio-digester tank. For instance, the effluents from the DRDO bio-digester achieve a Total Suspended Solid (TSS) density between 90 and 120 mg/l. While this characterisation may qualify for re-use in irrigation and discharge into public sewers, CPCB stipulates 100 mg/l TSS for discharge into inland surface waters and marine coastal areas.

Another issue is the safety of the inoculum itself. Bio-toilet manufacturers cannot bank on the Bergey’s Manual of Systematic Bacteriology—an online repository of bacteria and their characterisation—for a theoretical assessment of the safety of inoculum, as it characterises individual bacteria, and not the consortium used in bio-toilets. D V Kamboj, scientist with the Defence Research & Development Establishment, Gwalior, however, insists that DRDO has done practical assessments in this regard.

In response to an enquiry by the Indian Railways, DRDO’s Defence Research Laboratory, Tezpur, did a toxicity evaluation of the Anaerobic Microbial Inoculum (AMI) in 2012, and concluded that no toxicity was observed. The report has not been made public. “Bio-toilets are not monitored by the government. CPCB has stipulated guidelines, but there is no central authority to check how well these guidelines are being adhered to,” adds Kamboj.