Manual scavenging: A stinking legacy of suffocation and stigma 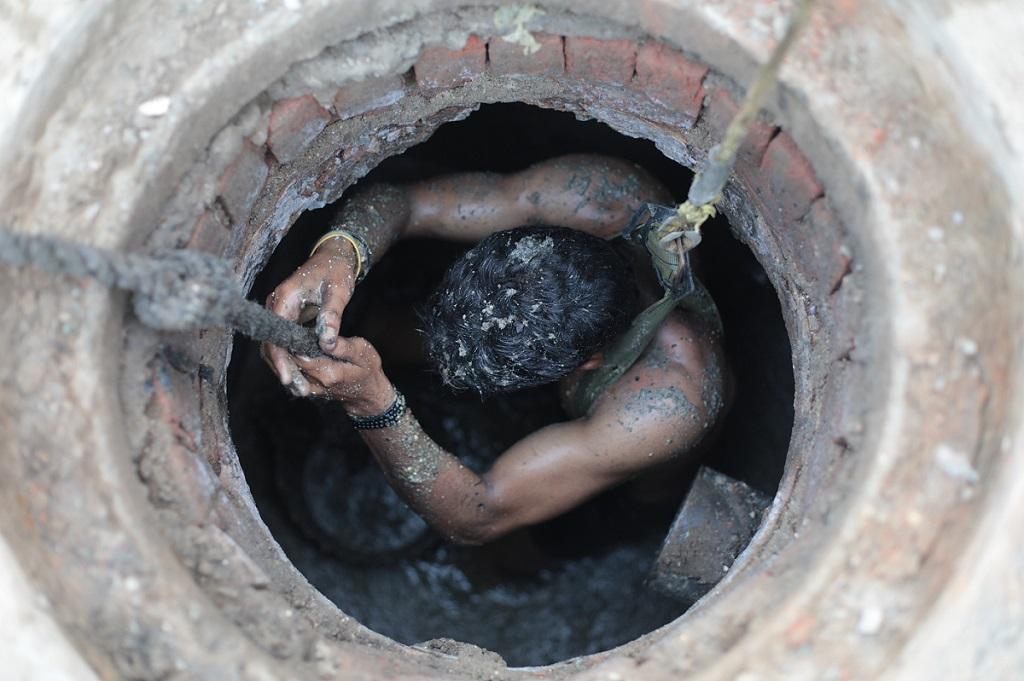 For some, it is the most nauseating thing to do; for others, it’s the only way to make a living. From drains and sewers to septic tanks and railway tracks, more than half a million manual scavengers across the country are cleaning, carrying and disposing of human excreta and everything else that we flush down the toilet.  They force themselves into choked sewers and septic tanks; hang on for hours, scooping out filth with bare hands and bearing the stench of sewage.

Manual scavenging was banned 25 years ago with the passing of the Employment of Manual Scavengers and Construction of Dry Latrines (Prohibition) Act, 1993, but it continues to find practitioners. The occupation persists mainly because of the continued presence of insanitary latrines. There are about 2.6 million insanitary latrines (dry toilets) that require cleaning by hand, according to Safai Karmachari Andolan—an NGO that works towards abolishing manual scavenging, and perhaps, the only one in the country.

There are structural problems as well, which force people to enter septic tanks. “Septic tanks are designed badly. They have engineering defects which means that after a point, a machine cannot clean it,” said A Narayanan, director of Chennai-based Change India.

The situation could go from bad to worse. Under the Swacch Bharat Mission, millions of septic tanks are being built in rural India. By 2019, some 30 million septic tanks and pits would have been dug along the Ganga. If the Central, state and local sanitation programmes do not take up faecal sludge management as a priority, the onus will shift to the lowest rung of the society to clean millions of dry toilets built with tearing hurry.

Adding to the problem is the fact that many cities do not have sewerage that covers the whole city. Sometimes, sewage lines are connected to storm water drains which get clogged and demand human intervention.

Open drains, according to Narayanan, are also badly designed, allowing people to dump solid waste into them, which accentuates the problem. Improper disposal of condoms, sanitary napkins and diapers clog the drains, which machines cannot clear.

Sub-castes of Dalits—Valmiki or Hela—who are at the bottom of the social hierarchy, take up this lowly job, not knowing that human faeces and urine harbour a variety of diseases. They may carry Hepatitis A, E. coli, Rotovirus, Norovirus, and pinworms. The community risks infection by coming in contact with these wastes. That also explains why sewer workers die as young as 40, falling prey to multiple health issues: cholera, hepatitis, meningitis, typhoid and cardio-vascular problems. In fact, repeated handling of human excreta without protection leads to respiratory and skin diseases, anaemia, jaundice, trachoma and carbon monoxide poisoning.

Manual scavenging is not only a caste-based but also a gender-based occupation with 90 per cent of them being women. Households with dry latrines prefer women to clean the excreta instead of men as they are located inside the house. According to a Human Rights Watch report, on an average, women get paid as little as between Rs 10 and Rs 50 every month per household. It is much less than men who earn up to Rs 300 a day for cleaning sewer lines.

This is where the irony of Swachh Bharat Mission lies. On the one hand it aims at protecting dignity of women by providing them with private sanitation spaces, and on the other, it is perpetuating humiliation of women manual scavengers as they are the ones who clean human excreta from dry-pit latrines.

In 2013, the ‘Prohibition of Employment as Manual Scavengers and their Rehabilitation Act came into force. However, according to Bezwada Wilson, this law leaves people “helpless”. “In the earlier Act, the district magistrate had the power to solve all the cases, but that’s not the case with the current one. If the assigned public official isn’t doing his duty of identifying manual scavengers and processing their rehabilitation, there is no mechanism to pull them up,” media had quoted him saying. "The Act does not address critical aspects of provisions like the rehabilitation of those who were liberated from manual scavenging before passing the law in 2013. Liberated manual scavengers regularly face brutal atrocity and violence. Therefore, ensuring protection for these families is crucial,” Wilson had observed.

“It is not going to be possible to eliminate manual scavenging unless we create the right technologies,” Wilson told media last week. There are reportedly about 15 innovations developed across the country to replace manual scavenging. According to reports, the Hyderabad Metropolitan Water Supply and Sewerage Board is using 70 mini jetting machines that can access narrow lanes and smaller colonies to clear the choked sewer pipes. In Thiruvananthapuram, a group of engineers has designed a spider-shaped robot that cleans manholes and sewers with precision.

While technology is considered essential to end this scourge, Ashif Shaikh, the founder of Jan Sahas social development society, is of the opinion that focusing only on technological fixes to end manual scavenging may not work. “It is a social and gender issue and can be eradicated by sensitising people about its ills. In 2012-13, we launched a nationwide march covering 200 districts across 18 states. Our objective was to make women aware of their right to live with dignity. We managed to liberate some 6,000 women during that yatra, and so far, we have liberated about 30,000 scavengers,” Shaikh tells Down To Earth.

“Our job does not end at liberating these women. To assure them of ‘sustainable freedom’, they need to be provided with an alternative livelihood option, which is difficult in many parts of the country as people belonging to this community are still looked down upon and refused jobs,” Shaikh rues. He urges the government to turn its attention away from toilet construction and explore ways to empty pits without human intervention.