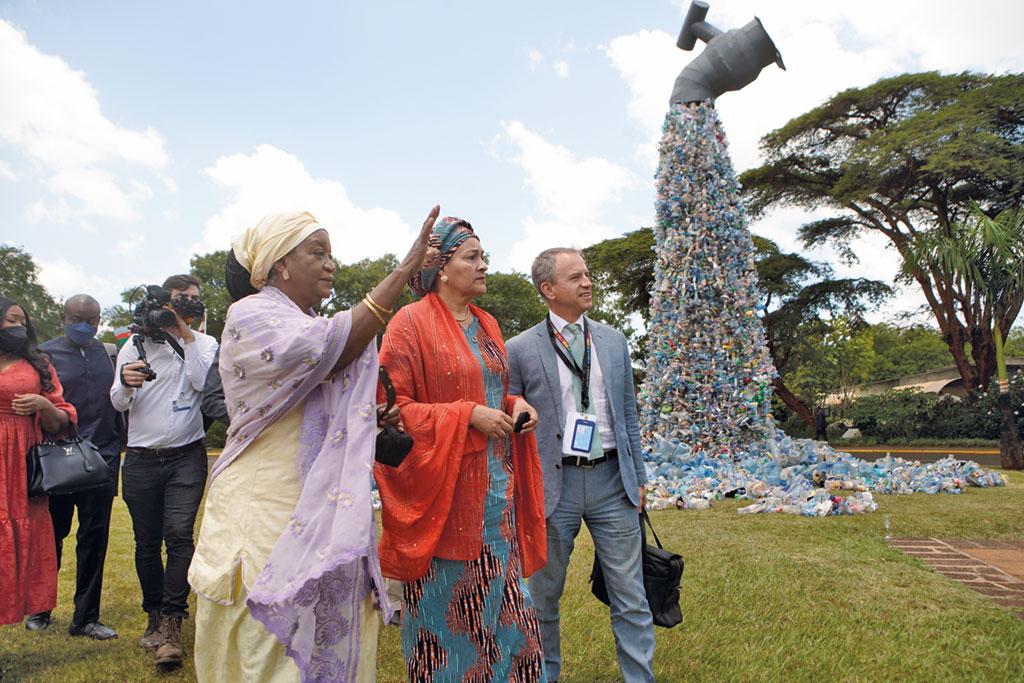 Officials walk past an artwork at the fifth UN Environment Assembly in Nairobi, Kenya that urges people to turn off the plastic tap (Photograph: United Nations Environment Programme)

FROM ESTABLISHING a science policy panel for chemicals and waste management to agreeing to restore ecosystems, the world passed 14 resolutions at the resumed session of the fifth United Nations Environment Assembly (UNEA), held in Nairobi, Kenya, between February 28 and March 2, 2022.

The most crucial of these was the decision to establish an intergovernmental negotiating committee that will forge a legally binding agreement to end plastic pollution. World leaders plan to start negotiations on this resolution in June.

If the timeline is kept, this will be the second-fastest environmental agreement to move from the adoption stage into negotiations. This highlights the urgency of the problem and the global commitment to address it.

The proposed committee has the ambitious task of drafting an agreement on plastics by the end of 2024, when the leaders plan to meet for the sixth Assembly.

Of the 11 global environmental agreements either in force or under discussion, the resolution to set up the UN Framework Convention on Climate Change (UNFCCC) in the 1990s was the fastest.

World leaders took a little less than two months to move from adopting the resolution to starting negotiations on UNFCCC. In the Paris Agreement under UNFCCC, it took over five months. 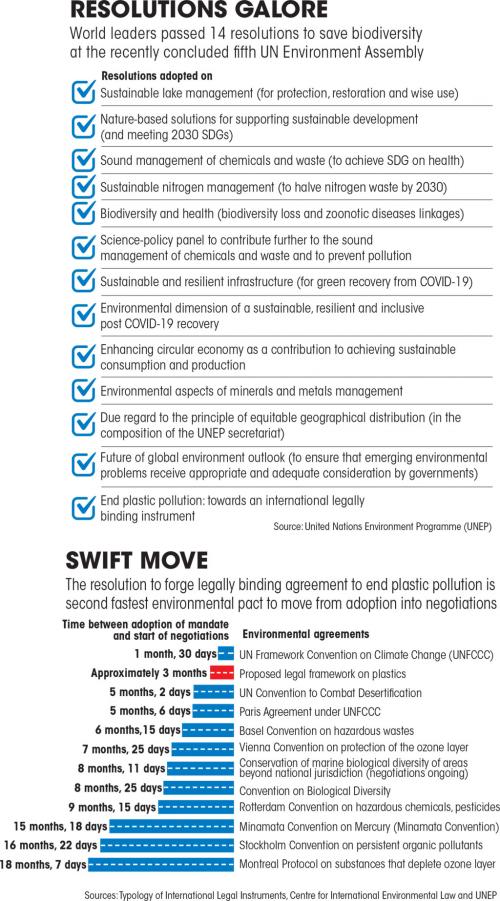 The treaty on ending plastic pollution, which includes microplastics and marine litter, will have both binding and voluntary approaches.

The resolution indicates that the committee has to include provisions promoting national and international cooperative measures and national action plans to work towards the prevention, reduction and elimination of plastic pollution.

The resolution indicates the possibility of a global fund and invites governments and other stakeholders to provide budgetary resources.

The fund will ensure countries and economies in transition that deal with a large fraction of plastic waste, especially in the global south, are supported by nations whose plastic production and waste generation are high.

While the resolution calls for strict action to curb the entire lifecycle of plastics, it is silent on whether the agreement will look at the oil, gas or coal sectors that are responsible for the raw materials used to make plastics. Currently, 99 per cent of plastics are produced from petrochemicals.

Experts expect fierce resistance from the petrochemical industry, which is not happy with the resolution.

In India, the share price of Reliance Industries fell as the news of the global plastic treaty spread across the country. The company holds a 42 per cent stake in the Indian plastic ecosystem.

Since the agreement invites all relevant stakeholders, including the industries, there will be attempts to insert half-baked solutions like chemical recycling (plastic to fuel) and incineration (including co-incineration) in the final text.

Uniliver a few years back started a pilot project in Indonesia under which it claimed plastic sachets could be “safely” turned into fuel. A report earlier this year by non-profit Global Alliance for Incineration Alternatives says the company clandestinely stopped the operations. 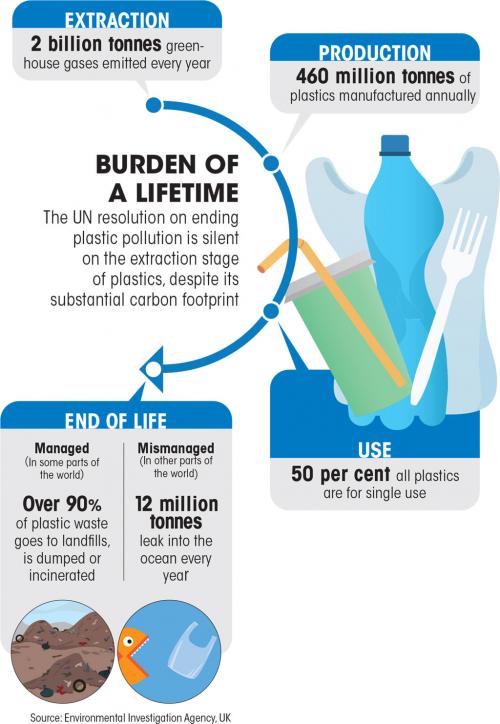 Countries are also holding on to plastics.

A report released at the Assembly shows Australia has been dumping plastic in ASEAN countries despite banning the export of plastic waste in 2020. The country has managed to do this by shipping plastics in the form of plastic waste fuel that contains a range of toxic additives.

In January, India released new guidelines under its extended producer responsibility (EPR) norms that introduced the concept of plastic credits for the industry. Under this, companies have a liability to collect plastic waste equivalent to the amount they generate in a year.

Further, if a company collects plastic waste in addition to what it generates, it can sell the extra as credit to companies that are not collecting enough plastic waste. The policy has piqued the interest of consumer goods companies who are using it to greenwash their brands and avoid accountability.

Dabur, one of India's largest consumer goods company, in February started claiming it was plastic neutral just by fulfiling its EPR liability.

The Assembly passed a resolution supporting the establishment of a comprehensive and ambitious science policy panel on the sound management of chemicals and waste and preventing pollution.

This is crucial as the world has failed to achieve the 2020 goal on management of chemicals, agreed under the Strategic Approach to International Chemicals Management founded in 2006.

There were also resolutions on minerals and metals, sustainable lake management and climate mitigation and adaptation.

The Assembly concluded with the adoption of a ministerial declaration reflecting concerns of UN member states on future pandemics and other health risks, if destruction of nature continues at the current rate.

The ministerial statement called for enhanced protection of habitats and wild animals in view of risks of the lethal pathogens spreading to humans.