Carried out by 2 non-profits, the expose has claimed that other countries across Asia too bearing the brunt

Plastic waste is being imported into India and other Asian countries, an expose by two civil society organisations claimed on October 28, 2019. India had banned the import of plastic waste from August 2019.

As many as 38 containers of contaminated waste were diverted by Indonesian officials to India instead of the United States (US), Indonesian civil society group, ‘Nexus 3’ as well as Basel Action Network (BAN), a global waste watchdog formed under an international treaty, said.

Out of these 38, as many as 25 containers arrived at Indonesia on June 27, 2019, and August 2, 2019. They were supposed to contain mixed paper and were going to a paper recycling unit there.

However, they were found to be mixed with hazardous and plastic waste. Therefore, these containers were supposed to be returned to the country of origin, that is, the US.

The civil society groups, giving several proofs in their report, claimed that they instead arrived at the Adani port in Gujarat’s Mundra on September 6, 2019.

As many as 15 of these containers were shipped on the Cosco Shipping Line from the Pacific Container Terminal in California, US. Ten others left the SA Marine T-30 Terminal in Seattle, Washington, in the May of 2019, the report said.

Besides these 25 containers, another 13 containers were shipped from the US to Indonesia on July 18, 2019. They were also supposed to contain only paper for recycling but instead had plastic waste.

Instead of being reshipped to the US, they instead made their way to Gateway Terminals India APMT at the Jawaharlal Nehru Port Trust, Nhava Sheva, in Maharashtra, on August 24, 2019.

Then, they were taken by a truck to their final location of Kanpur Concor CFS, Kanpur, on September 14, 2019.

To buttress their claim, the civil society groups gave the exact date and timings of the respective consignments landing in India. They even attached screenshots of the containers’ journey at various points, from Indonesia to India.

While ‘Nexus 3’ received the container (consignment) numbers, BAN traced the origin and destination of these containers.

“Since these shipments were allowed into India, a country that has actually banned the import of plastic waste, and were blocked from entering Indonesia due to being too contaminated with plastic waste, it appears that India is seriously lacking proper enforcement of their law,” Jim Puckett, executive director, BAN, told Down To Earth (DTE).

He added: “It is very likely that this imported plastic will be dumped and/or openly burned in India — a fate which is unacceptable for the Indian environment.”

The expose report did not say if anything was known about the shipments to India’s worth in terms of amount or weight.

“I do not know of the worth of these, nor the weight.  However, we can definitely say that this is the first such instance we have ever been getting to know of this kind of re-direction of wastes after promising returns to the country of origin,” Puckett told DTE.

He asked port officials in India to pull up their socks. “Besides, if Indonesian government officials failed to properly notify India of what they knew to be unacceptably contaminated paper wastes, they acted criminally and India has every right to conduct an inquiry into that matter,” Puckett wrote in his replies to DTE’s queries.

It is not that this illegal re-export of waste happened only in India. Thailand, Vietnam and South Korea were other destinations.

Of all the 58 containers that came from the US in which paper was illegally mixed with plastic and hazardous waste, 38 were diverted to India, three went to South Korea, and one container each to Thailand, Vietnam, Mexico, the Netherlands, and Canada. 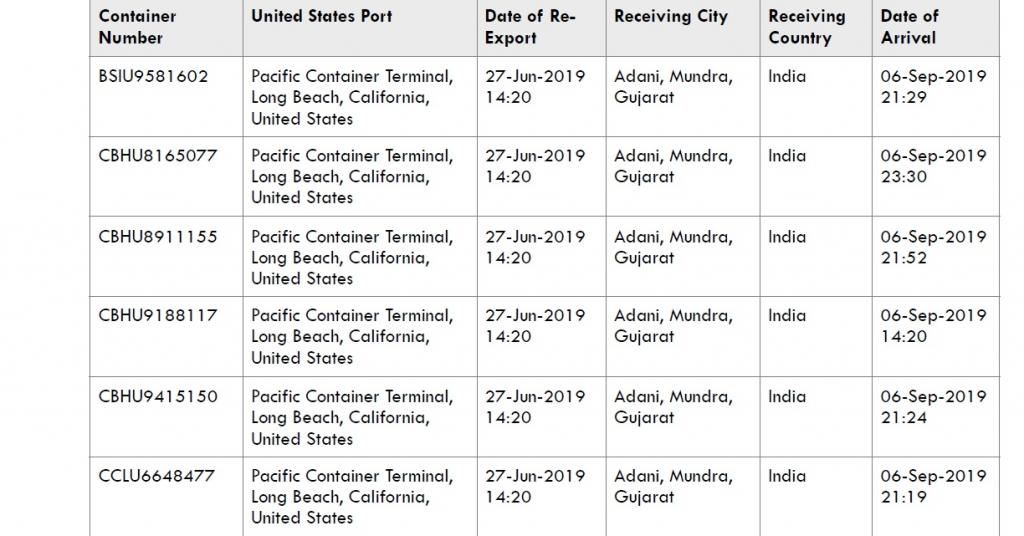 Incidentally, the Indonesian government had announced that it would send the waste meant for recycling back to the country of origin if it was found contaminated with plastic and hazardous waste.

“Indonesia is sending 547 containers of waste back to wealthy nations after discovering they were contaminated with used plastic and hazardous materials, amid a growing backlash in Southeast Asia against being a dumping ground for the developed world’s trash,” Indonesia had said in a press release dated September 20, 2019.

In another instance, it was reported that large-scale plastic and hazardous waste were being imported illegally to Indonesia in July 2019.

However, the expose by the two civil society groups showed that certain corrupt officials were involved in ensuring that the waste landed in Southeast Asian nations.

“After promising that the illegal plastic waste imports would be returned to their countries of origin, our officials have instead, engaged in a global waste shell game, victimising more countries with the unwanted, illegal and contaminated shipments,” Nexus 3 representative Yuyun Ismawati said.

She added: “Meanwhile, the US government and the original perpetrators of the illegal shipments are let off the hook. The public has been lied to, the environment is further harmed, and the criminals go free. It is outrageous.”

Puckett noted: “It is an international norm that illegal waste exports are the responsibility of the state of export, in this case the United States, and the exporting state has the duty to reimport the wastes.”

After China banned the import of plastic waste from January 1, 2018, it was widely speculated that South and Southeast Asia, including Thailand, India, Vietnam, would bear the burnt.

However, after that development, many countries imposed bans on the import of plastic waste to save themselves from being dump yards of the developed world.

It was widely anticipated that even after this ban came into existence, the illegal import or re-export from other countries was happening.