A village in outer Delhi is sinking in wastewater overflowing from the Najafgarh drain. That’s because of construction over a wetland, which has blocked the natural water channels. Extreme rainfall has worsened the crisis 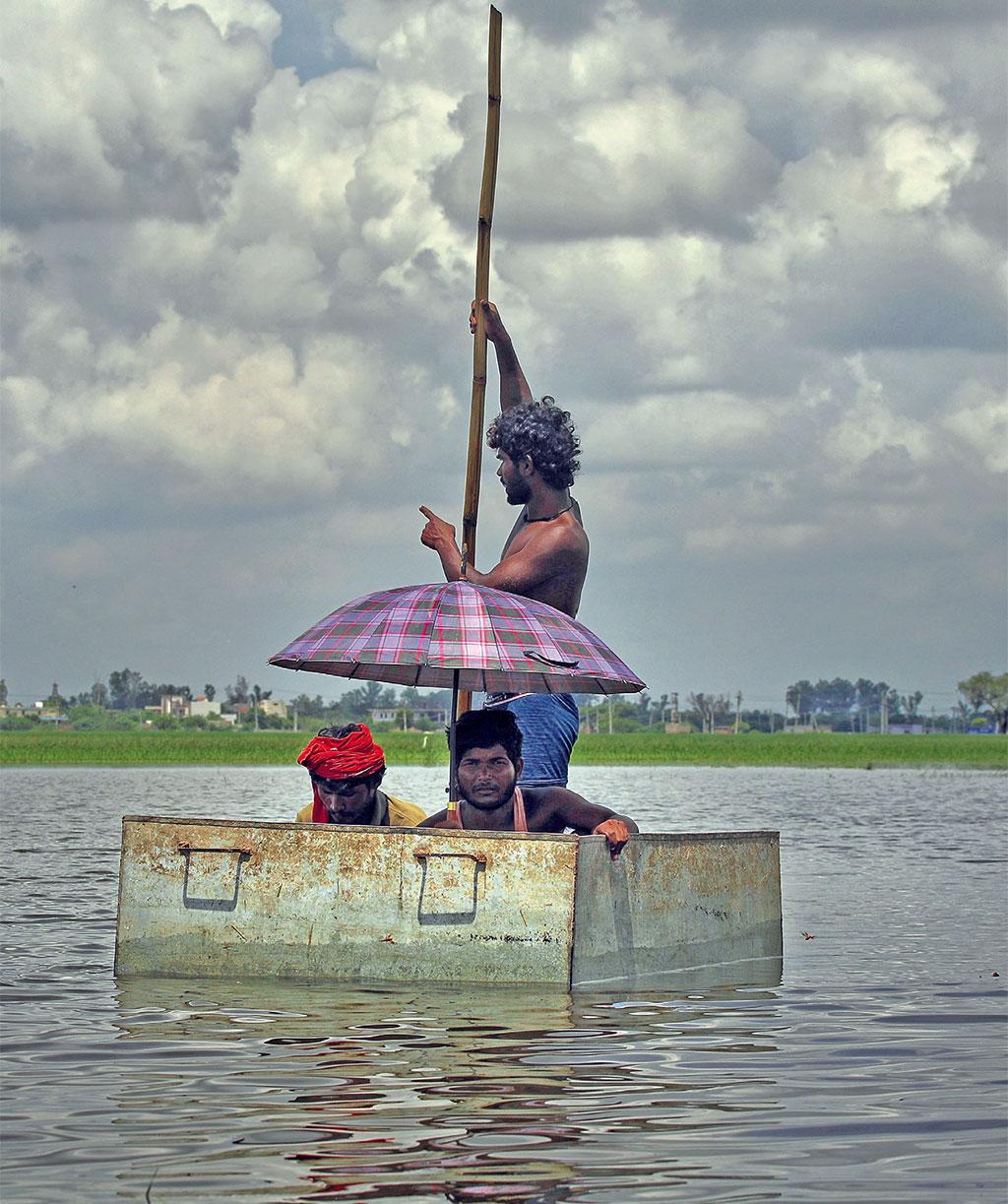 Raota village, on the Delhi-Haryana border is inundated with stagnant wastewater overflowing from the Najafgarh drain, which separates the two states (Photograph: Vikas Choudhary)

If you wished to enter Raota village, on the Delhi-Haryana border in the national capital’s southwest district, you would have to wade through knee-deep wastewater.

Roads there resembled a sewer; people used boats to commute. Wastewater entered almost every house. There was not a single patch of dry land visible and the rice farms looked like underwater weeds.

Officially, Raota is part of Delhi; but the village looks nothing like the rest of the capital — no clean drinking water, electricity or street lights.

For the past 15 years, this village has been inundated with wastewater from the Najafgarh drain (erstwhile, the Sahibi river) which separates the two states. The drain gets wastewater from residential colonies and industries in Gurugram. A study by Delhi-based non-profit Centre for Science and Environment in 2005 found that about 50 per cent of Gurugram’s sewage finds its way into this drain.

When there is heavy rainfall — like during this year — it exacerbates the crisis. When Down To Earth (DTE) visited Raota on August 27, 2020, more than 283 hectares (2.83 square kilometres) of farmlands, roads and empty plots were submerged in wastewater.

Experts say the flooding is due to unregulated construction activities over the Najafgarh wetland, where the Najafgarh drain empties. This has shrunk the size of the wetland — from 220 sq km before Independence to a mere 7 sq km today.

A report by the National Remote Sensing Centre, Hyderabad, says the built-up area in the Haryana sub-region of National Capital Region increased by 38,032 ha between 1999 and 2012. In the same period, the area of wetland plummeted by 17,539 ha.

“Earlier, wastewater would recede after the monsoon. Now it stays throughout the year,” said Suraj Mal, a 96-year-old resident of the village.

Neha Sinha of the Bombay Natural History Society, who has studied the Najafgarh wetland, said:

Over the years, construction on the wetland on the side of Haryana and the creation of bunds have destroyed the natural water channels and impacted the flow of the Najafgarh drain.

Ecologically, sewage water should be treated before it is allowed to flow; but that doesn’t happen here.

“When we go to the municipal councilor, he says floodwater does not come under his domain; and, when we write to the Government of India, the response is that it is the responsibility of the Delhi government,” said Suraj Mal. “We have knocked on the door of every authority, but have not got any help,” he added.

“Earlier, when we faced a problem we would go to the village Pradhan and it would be resolved. Now there is nobody to listen to us,” said Vatan Phalswal, a resident of the village.

Raota’s problems are a manifestation of a bigger problem faced by many Delhi’s villages: The third tier of the governance system — Panchayati Raj — is missing.

In 1961, there were 360 villages in Delhi. There are only 112, according to the 2011 Census. Others have been subsumed by the Delhi Development Authority to satiate the ever-growing housing needs of the Capital.

Ironically, Delhi was one of the first states to implement the Panchayati Raj Act, 1952 — the first Panchayat election took place in October 1959.

However, on January 25, 1990, through a notification by the Lieutenant Governor of Delhi, the Panchayati Raj Act, 1952, was abolished. This notification brought all villages in Delhi under the control of the municipality. The rationale given by officials then was that since most of the work was already done by the municipality, the existence of a village Pradhan was redundant.

Raota is paying the price for this. 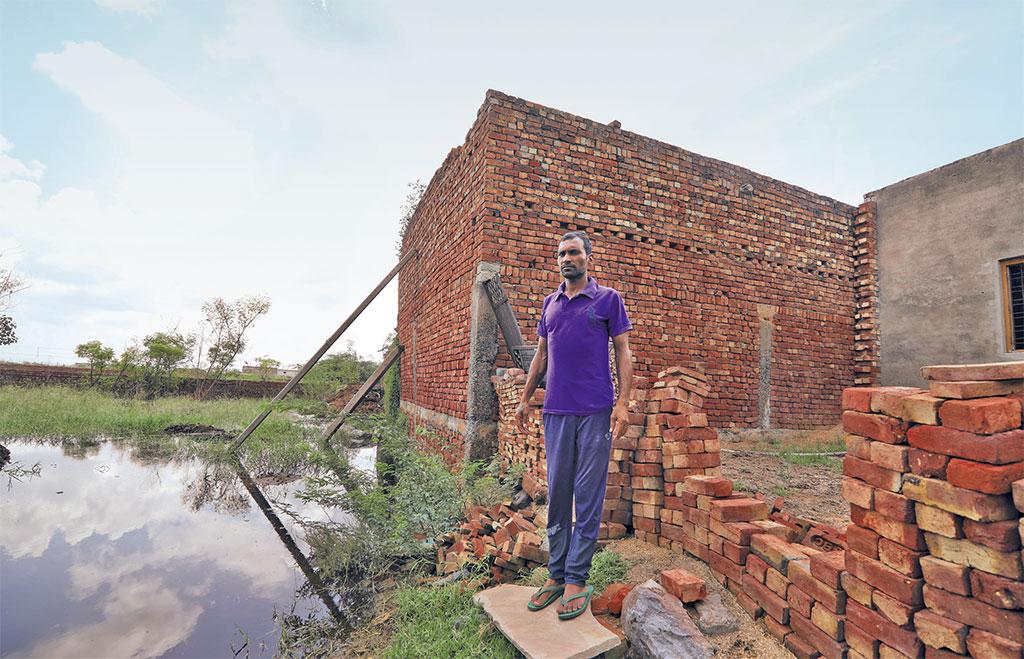 “But funds for village development are being spent on creating illegal colonies on farm lands. That’s why villages like Raota remain without basic amenities,” alleged Paras Tyagi of the Centre for Youth Culture Law and Environment, a Delhi based non-profit working on issues related to Delhi’s villages and helping the residents of Raota.

DTE tried to reach the district commissioner and the municipal councillor, but there was no response.

Tyagi said villages such as Raota are deliberately kept underdeveloped, using policies like the abolition of Panchayats so that such areas can be used by builders.

“The budgetary allocation for rural development of Delhi is the lowest in the country. These are the only pieces of lands which can be developed in Delhi now. By keeping these villages underdeveloped, the government is trying to push people out and give these lands to developers,” Tyagi said.

“Already, many companies have bought land in Raota and many village residents have left,” Tyagi said. For instance, 31-year-old Rajesh Kumar, whose 1.6 ha is submerged in waste water since 2006, now works for a travel company in Gurugram.

Those who stayed back struggle to stay alive in the wastewater. Take the case of 37-year-old Vikas Kumar, whose house is supported by wooden beams. But he has given up all hope: “I know my house will collapse any day. The government just doesn’t care,” he says. Many houses are already submerged under wastewater.

The Delhi government belatedly woke up in 2014 when it prepared a draft — the Delhi Nagar Swaraj Bill — which proposed the creation of Mohalla Sabhas that would have powers similar to the provisions under the Panchayati Raj Act. “But nothing has moved. The Bill lies in cold storage,” Tyagi said.