Indonesia’s third-largest city is not fully zero-waste yet. But its journey is inspirational

The attempts by Indonesia’s third-largest city, Bandung, to solve its waste problem using the ‘zero-waste model’ are praiseworthy.

The capital of West Java province, Bandung is located 180 kilometres southeast of Jakarta and has a population of over 2.5 million inhabitants.

Since 1987, Bandung had been dumping almost 4,000 cubic metres of mixed waste per day in the Leuwigajah landfill. On February 21, 2005, an avalanche of the accumulated waste at the site buried 71 houses and killed 143 people.

In the aftermath of the landfill slide, the Bandung government tried to build an incinerator in the eastern part of Bandung city. This led to a massive and long protest by surrounding communities and non-profits.

The incident also led the Indonesian government to enact the Waste management Law of 2008 (No.18/2008) with an intention to change its waste management from a collect, transport, dump scheme to a more integrated system that incorporated collection, sorting, recycling, and waste processing.

However, soon, it was discovered that implementing the law on the ground was difficult.

First, there was no agency solely responsible for waste management. Second, while the law highlighted the need to sort waste, it did not prescribe enforcement strategies. Third, community structures like the kelurahan (sub-district), or village or rukun warga (RW or Community Association) did not have the resources and the authority to require residents to sort/segregate their waste at source.

A turn for the better

“In 2013, an architect, Ridwan Kamil, was elected as the Mayor of Bandung. His election brought about political openness. This gave the zero-waste movement in Bandung a chance to influence the government directly,” David Sutasurya, executive director of YPBB, a non-profit environmental organisation based in Bandung, said.

Following Kamil’s election, the YPBB started collaborating with the government to develop a masterplan, regulations and the groundwork to manage waste using the zero-waste model.

A pilot programme was iniatiated under this forum that aimed at segregating waste at the source for 25 houses. However, gaps in the pilot prevented full participation from the public.

YPBB then took some decisive steps to clean up Bandung.

According to a report by the Global Alliance for Incinerator Alternatives or GAIA, Bandung city currently generates roughly 1,600 tonnes of waste per day.

At the sub-district level, the waste collector brings discarded waste from the residents to a transfer station (TPS). From the TPS, the Bandung city government uses trucks to transport collected waste to the TPA.

The city spends most of its funds on — $6.8 million — in sending its waste to the Sarimukti landfill.

However, not all wastes are captured by this system as waste collectors are not available in all areas, leaving residents with no choice but to dispose their waste in the streets, rivers, or open dumps.

Moreover, several waste collectors reportedly burn waste because there are no transfer stations in their communities. In other cases, the absence of a mandatory sorting policy at the kelurahan or RW level encourages residents to simply refuse segregating their waste.

However, according to YPBB, if its waste management programme is adopted by the entire city, Bandung can potentially reduce 73 per cent of its waste — to around 450 tonnes per day, which will also mean a 73 per cent reduction in cost.

The reason for this is simple: the very composition of the waste that Bandung generates.

“More than half of the household waste in the city, or 57 per cent, is organic. Recyclable waste constitutes 16 per cent while the remaining 27 per cent is residual waste,” Sutasurya said.

He added: “Organic waste can be processed at home, in community composting facilities or TPST 3R (city-level recycling stations), while recyclables maybe sold by garbage collectors for additional income.”

The YPBB adopted this approach in four kelurahans namely Sukaluyu, Babakan Sari, Neglasari, and Cihaurgeulis. Instead of moving piles of trash to a dumpsite, the wet waste is treated in local plants via composting and bio-digester, and the recyclable waste is channeled to junkshops, while residual waste is sent to the dumpsite, Sutasurya said.

Today, the Zero Waste Cities programme is present in 41 RWs (community structures) in Bandung. To support waste collection services in these 41 RWs, residents pay user fees to subsidise the salaries of waste collectors.

Sukaluyu is one of Zero Waste model kelurahans in the city, which manages a network of community-scale composting spaces, capturing almost all organic waste in the village.

“We have been able to further strengthen the role of the community in Bandung’s waste management,” Sutasurya said. 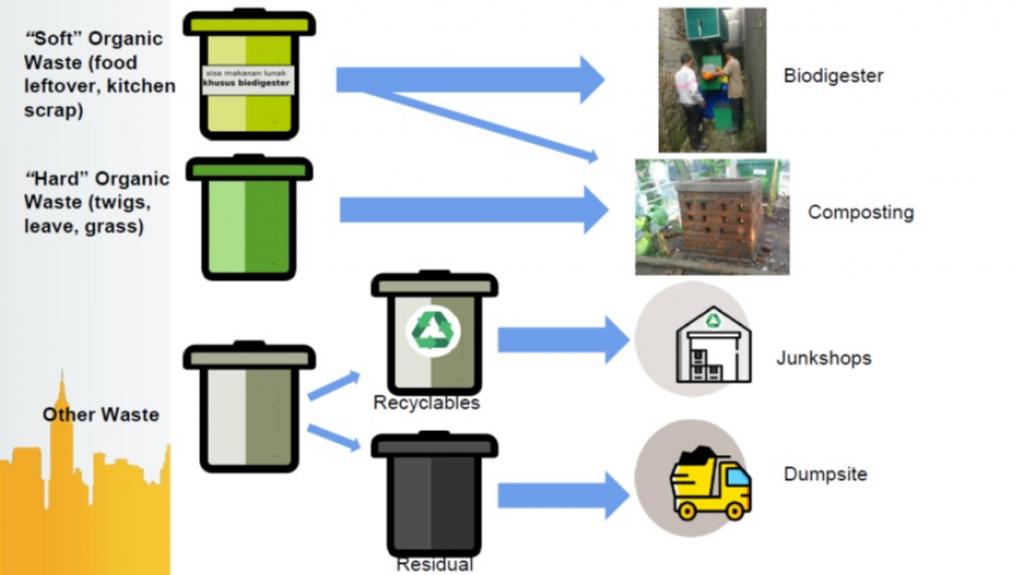 In 2017, a flagship programme called ‘Waste-Free Area Program’ or Kang Pisman to reduce waste, separate, and reuse waste was launched.

In 2019, Bandung city enacted regulation on plastic bag reduction. Bandung envisions to manage 60 per cent of organic waste within the confines of the city.

However, the city’s current resources remain a challenge to fully adopting zero-waste.

“We can see the government’s increased commitment towards promoting the zero-waste system, and public interest started to increase with the Kang Pitman campaign and the mayor's leadership. But it is still too early to say anything significant about this,” Sutasurya said.

This is the second of a 10-part series