Ten zero-waste cities: How Seoul came to be among the best in recycling

Seoul, the capital of South Korea, has over 10 million people generating 9,189 tonnes of municipal solid waste per day. Nevertheless, it has one of the most rigorous waste recycling programmes in the world.

For the last three decades, waste reduction and waste diversion from landfills have been key priorities in South Korea. With rapid urbanisation, the Seoul Metropolitan Area has struggled with growing waste problems.

However, its world-class solid waste management (SWM) legislation and initiatives including a volume-based waste disposal fees (VBWF) system, a deposit refund system, extended producer responsibility (EPR), and bans on problematic plastic items and packaging have all significantly contributed to waste reduction since the early 1990s.

Back in 1991, recyclable waste started increasing due to the compulsory separate collection,where household waste is separated to recyclable material, food waste and the rest. The proportion of waste to be incinerated and recycled kept increasing while that to be disposed in landfills kept decreasing in Korea.

Presently in Seoul, all food waste disposal is charged based on the volume or weight, depending on the method each municipality chooses among:

The standard bag system is one in which a discharger buys a standard plastic bag to dispose of food waste. The fees are collected in proportion to the amount of food waste through the cost of purchasing the bags.

The chip or sticker system requires a discharger to buy a payment chip or sticker and attach it to a collection container to be picked up. The RFID system allows the information on a discharge to be checked through an electronic tag, and fees are charged according to the waste volume.

Since the RFID system is the most suitable option for the objective of a volume-based fee system, the Ministry of Environment recommends this system.

In 1995, in an attempt to reduce the quantity of waste and increase the rate of recycling, the South Korean government implemented a VBWF system countrywide.

The main objective of the VBWF system is two-fold: To impose waste treatment costs on each polluter based on the amount of waste generated, and to provide free collection service for recyclable wastes, thereby inducing reduction in generation of wastes at source and encouraging the collection of recyclable wastes.

Residents pay different fees for the bags depending on the size and the regions in which they reside, while enjoying a free service for collection of recyclables. The law requires that residents properly sort out their waste and imposes fines of up to approximately $1,000 for violations of the garbage disposal rules.

Later in 2010, the government also allowed major grocery store chains to replace single-use grocery bags with multi-purpose plastic bags that can be used as litter bags in the area, in order to reduce the number of plastic bags discarded after grocery shopping. 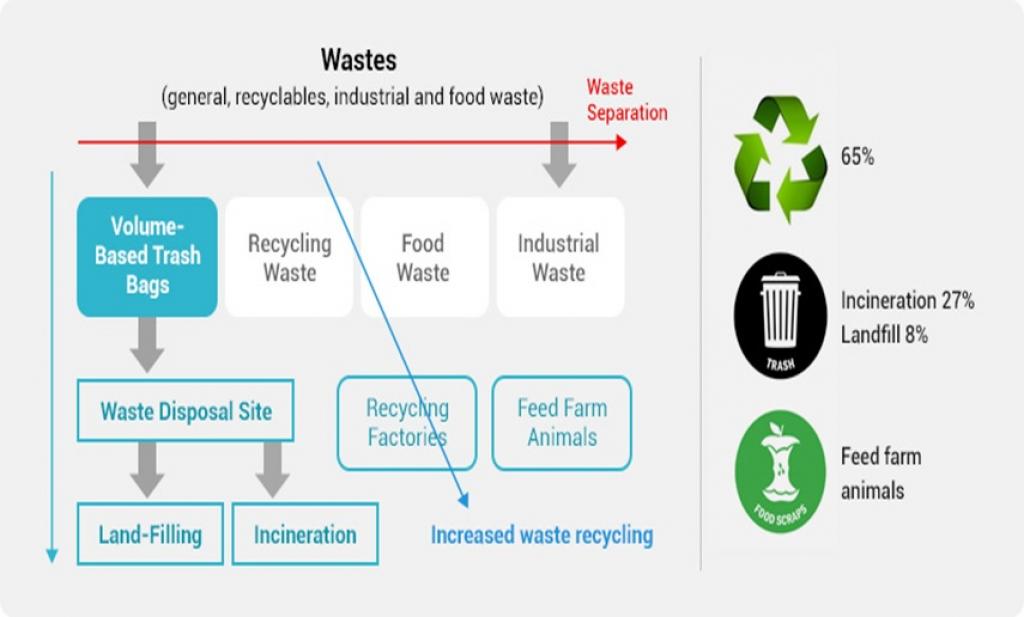 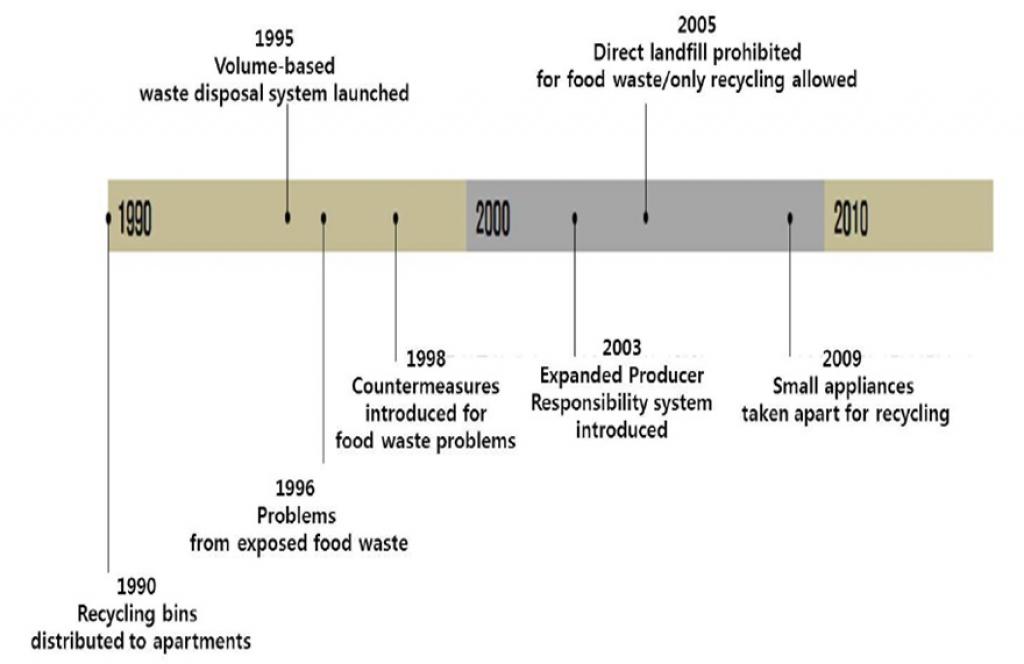 After eight years of implementation, the VBWF system has proved to be very successful in reducing MSW generation in South Korea. The system led to a 17.8 per cent reduction in MSW generation and 21 per cent increase in recyclable wastes in the first year (1995) itself. Between 1994-2001, MSW generation decreased by 16.6 per cent, and at the same time, the recycling rate increased from 15.7 per cent in 1994 to 43 per cent in 2001.

In addition, 142 out of 145 local governments are participating in the Volume-based Wastes Disposal System. The RFID system has been expanding in earnest since 2012.

Local governments, along with environmental groups, played an important role in successfully implementing the VBWF system across the nation, by conducting feasibility studies and coordinating public hearings. The programme had a far-reaching effect on the reduction of waste generation and recycling in the MSW sector.

It has also changed the pattern of waste generation, awareness of the public toward waste disposal, as well as the behaviour of consumers and producers.

In 2003, an EPR was imposed on manufacturers, which replaced the deposit refundscheme and held the manufacturer responsible for the costs of managing their products at end of life. The EPRs' coverage was also extended to include paper packs, plastic containers, scrap metals (including steel cans), glass bottles, large and small home appliances, discarded fluorescent lamps, and used batteries. This dramatically improved the supply and demand situation.

On plastic pollution, the city plans to halve the amount of disposable plastic items used by 2022, while increasing the recycling rate to 70 per cent. As part of Seoul’s plastic-free policy initiatives, local environmental groups are leading several campaigns to phase out plastic products, including plastic cups and straws, plastic bags, food delivery containers, and plastic laundry covers.

This is the seventh of a 10-part series