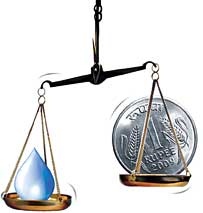 GIRIJAMMA A R lives with her family of five in a middle class locality in Mysore. Last month she paid the municipality Rs 240 for 82,000 litres water consumed over a period of two months. This amount may rise to Rs 350 per month in four years when the 900,000 residents of the city including Girijamma start getting 24x7 water supply.

24x7 is a misnomer for a modernization model for water distribution system promoted by the Union Urban Development Ministry and does not mean round-the-clock supply. The Mysore City Corporation (mcc) adopted the scheme to overhaul the city's century old water supply lines at a cost of Rs 194 crore. The project funded under Jawaharlal Nehru Nationl Urban Renewal Mission (jnnurm) is meant to ensure every litre of water (142 million litres-a-day) supplied to the city's residents is accounted and paid for.The twin cities of Hubli and Dharwad as well as Belgaum have implemented 24x7 in limited zones. But in Mysore the scheme extends over the whole city.

"It is the biggest public private partnership project in India," said A Mahendra, chief of marketing and business development of Jamshedpur Utilities and Services Company (jusco), a subsidiary of Tata group. The company bagged the contract for restructuring the city's water supply system in November.

But R C Raiker, Commissioner, mcc, denied it. "It is not a Public Private Partnership project since the entire funding is coming from the government. Only the contracts for construction and putting ducts have been given out," he said. He also said mcc will retain control over the water utility as it will fix the water tariff. The new system would drastically reduce revenue losses from unaccounted water supply from 42 per cent to 20 per cent. Customer services and complaint redressal too will be improved through computerization, Raiker said.

jusco won the Rs 162-crore contract for remodelling and strengthening the water distribution system while Nagarjuna constructions bagged contracts for constructing overhead tanks, main feeder and trunk lines. When the project gets completed in 2013, jusco would continue to maintain the water supply system, issue bills and collect revenue for two years."For providing the services we will be getting a fixed fee along with a performance linked variable fee," said Mahendra.

A public meeting was organized in the city on January 15 to protest against the water privatization. It was attended by non-profits that included Pragathi Para Sangatanagala Ookuta and Samata Vedike whose members said similar privatization experiments in the West had crippled the public sector. Devanur Shivamallu, Congress worker associated with the Cauvery Basin Project, said privatization would make water unaffordable for the poor. "Private players are there only for profit. The government should retain distribution and raise bills," said Shivamallu.

Mysore district commissioner Mannivannan P who oversaw the implementation of 24x7 pilot projects in Hubli and Dharwad said the Mysore project is better as the contractor company has no say in water policy and pricing. "In Hubli and Dharwad the private company was given partial decision making power," Mannivannan said.

Non-profits under the aegis of Campaign for Water Privatization who are opposing the 24x7 schemes across Karnataka said people are being misled.

"There is not enough water in the Krishna Sagar Dam, the main source of Mysore city's drinking water supply. How will the scheme ensure equitable water supply to all in the summer months?" asked Nanjaraj Urs, a retired Mysore University professor.


Activists expressed concern over the effect of the project on poor. "What will happen to the poor people living in semi slum areas like Kokerhalli, Bamboo Bazaar and Janata Nagar who are getting water free of cost now?" asked Prof. Shivarama Kadanakuppe, principal of Vidya Vartaka College in Mysore.

The municipal commissioner claimed that poor people would not be affected. "Minimum drinking water will be supplied free of cost and consumption above a certain level will be charged," Raiker said.

Whether poor people will get subsidized drinking water is not certain. What is certain is with 24x7 taps in public places will go dry. "There is no need for public taps. All will get individual water connections," Raiker said.