‘Save Yamuna’ activists call off protest 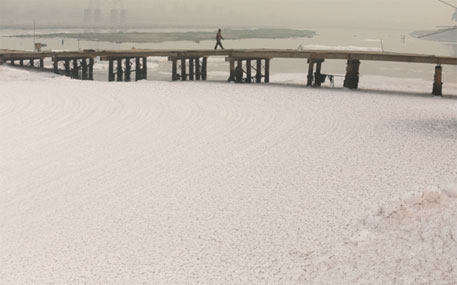 Following an assurance from the Centre, farmers and religious groups fighting for Yamuna’s cause decided to call off their indefinite protest in New Delhi after three days.

Senior leaders and Bharatiya Janata Party (BJP) national president Amit Shah met a delegation of the Yamuna Muktikaran Abhiyan (YMA) on Sunday and assured them of concrete action to ensure the natural flow of the river.

“Singh told us that he had held a detailed discussion with Prime Minister Narendra Modi over the cleanliness of the Yamuna. He also assured us that the Union government is preparing a roadmap with environment minisrer Prakash Javadekar and water resourced minister Uma Bharti. For this, they have sought two months.”

Earlier, around 1,000 people, comprising marginal farmers, devotees and activists, had started a march from Kosi Kalan in Mathura to Delhi on March 15 in a bid to save the Yamuna that has turned into a sewer canal at present. The group reached the national capital on March 20 with the intent of staging an indefinite protest.

YMA activists have demanded that the clean, ecological flow of the Yamuna should be maintained between Yamunotri and Allahabad. They also want the entry of sewage in the river to be restricted. The activists want to bring to the government’s notice the polluted condition of the river in Vrindavan.

“The people of Delhi have turned the river into a waste dumping backyard,” Raghuveer Singh of Nandgaon village in Mathura said.

Like others, Raghuveer also reached Delhi to make his voice heard in the power corridors. “You people are treating us no less than Pakistan. Our perennial Yamuna has dried up in places and a black, foul drain is flowing in place of the river leading to crop loss and health problems.”