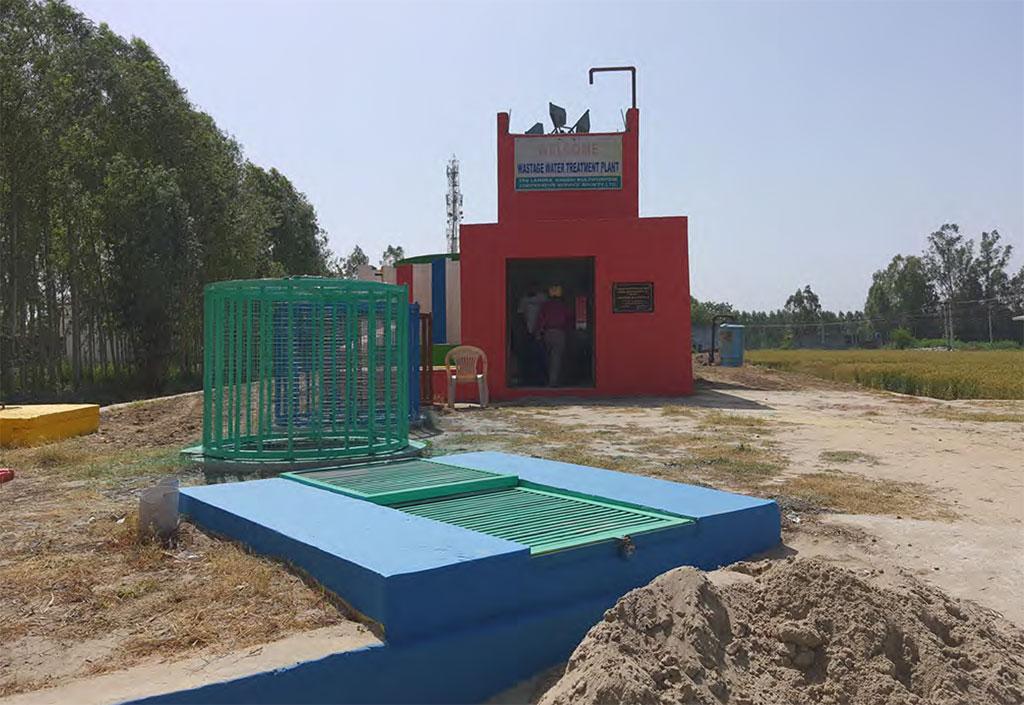 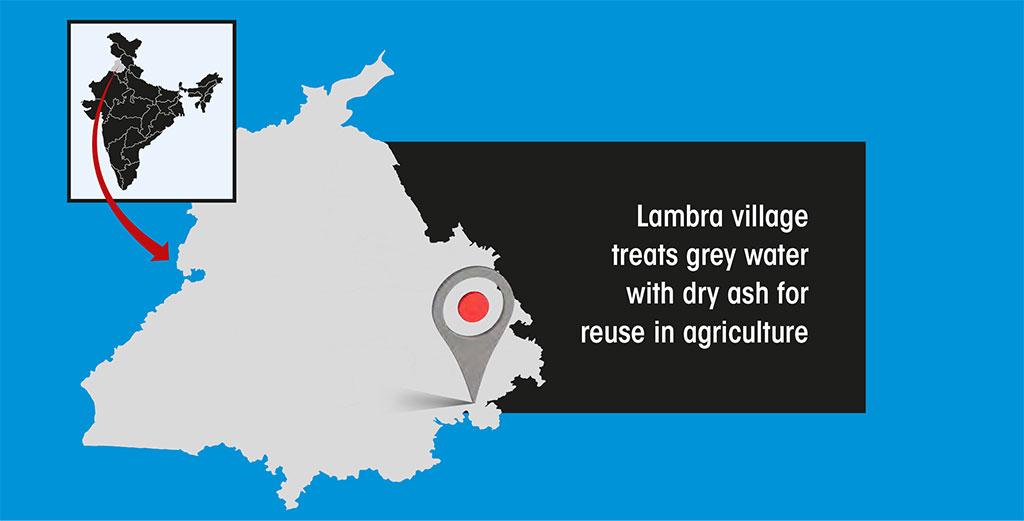 The households in Lambra village have 100 per cent functional household tap connections for supply of drinking water. Some of the households and farmers have individual bore wells. The village has a total population of 1,673 people and 346 households, with agriculture the major occupation.

Overdependence of groundwater for all potable and non-potable uses caused a huge decline in groundwater. In the last decade —2010–20— the groundwater plunged from 19 metres below ground level (mbgl) to 60 mbgl.

The water table in the area went down to 60 metres (200 feet) below ground level which was earlier at 65 feet below ground level. A huge amount of grey water is also generated from households and kitchens due to water wastage.

Untreated grey water initially found its way to the village pond and to open drains and depressed areas of the village. Drains were choked by indiscriminate dumping of solid waste. Heavy showers caused water stagnation in the village along with a foul smell and increase in vector-borne diseases such as dengue, malaria and typhoid.

Hoshiarpur-based society Lambra Kangri Multipurpose Cooperative Society Limited was founded in 1920 in Lahore. In 1999, however, the then joint registrar, Cooperative Societies, KS Pannu (IAS) converted it into a multipurpose society, which was a catalyst for its growth.

Since then, the society has been working on various development aspects including environment, finance, education and health in the four villages of Lambra, Beron Kangri, Dudhiya Kalan and Baggewal. The communities had to spend 20 per cent of their income on health costs. 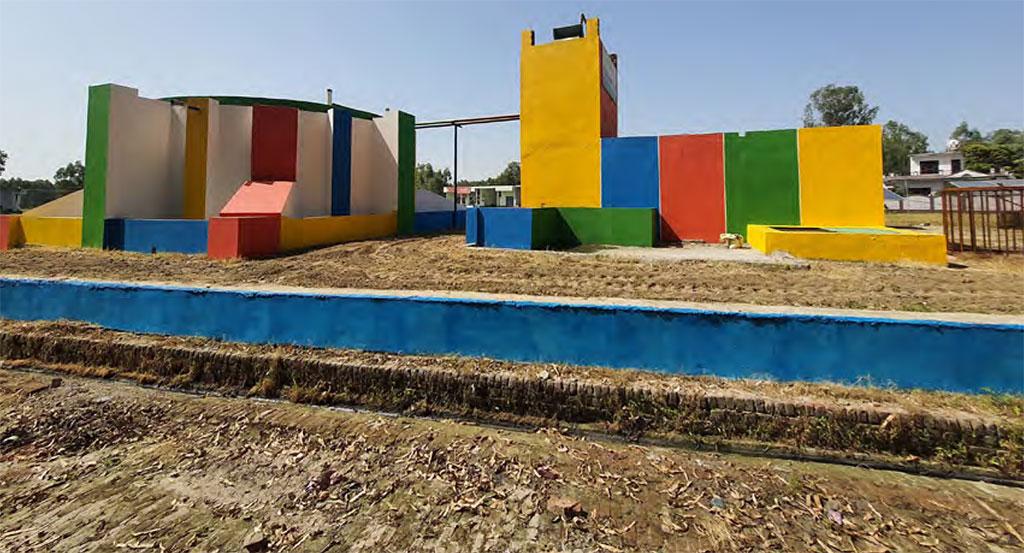 Many wastewater treatment plants generally face closure due to the excessive operation and maintenance costs. To minimise running costs, this grey water plant is dependent on solar energy, which helps manage a huge amount of rice husk generated every year. Rice husk has been used to filter the grey water.

In 2018, Lambra Kangri Multipurpose Cooperative Service Society, under Pannu’s guidance and expertise, undertook a pilot project of cleaning grey water using rice husk ash brick in Lambda village. The grey water collected from five per cent of the houses was first screened to filter out solids and then passed through the husk ash for filtration.

To gauge the efficiency of filtration, treated and untreated samples were sent to the Civil Engineering Department of the Punjab Agricultural University (PAU) for laboratory tests. The tests showed remarkable results. The BOD, COD, and pH levels of grey water were reduced by 80-90 per cent.

In 2019, based on the pilot results, the society planned to install a rice husk dry-ash grey water treatment plant. The treatment system was constructed on 630 hectares (1,556.76 acre) of society land. The plant, treating grey water and reusing the treated grey water for irrigation and groundwater recharge, caters to 300-400 households. 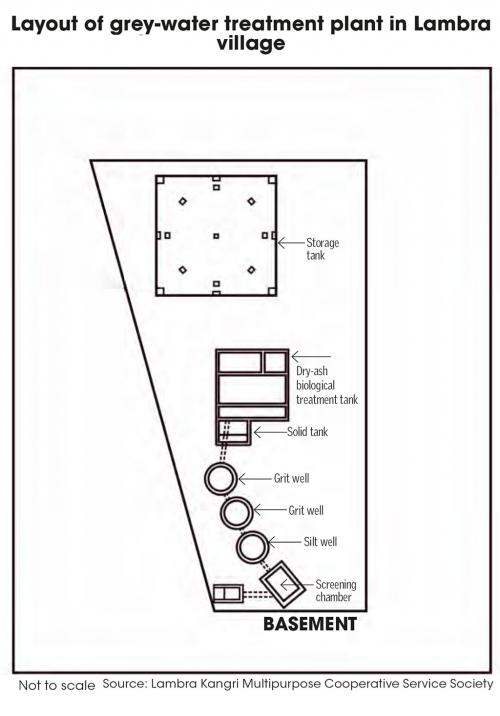 A drain network that was constructed by the Gram Panchayat in the late 1980s carried grey water from 346 households to the pond in the village.

But now, grey water from drains flows towards the grey water treatment plant. The grey water first passes through the screening chamber where solid waste (floating coarse debris) is filtered out.

Wastewater then passes through three collection wells each which allows the finer debris like silt and grit to settle at the bottom.

To maintain the overflow during heavy showers, a gate valve is installed inside a chamber, which is further connected to the rice husk ash tank.

Wastewater from these wells is then conveyed into a deep concrete rectangular tank filled with rice husk ash.

The surface absorption of the husk ash reduces 80 per cent of the pollutants from wastewater.

Using a vertical pipe, water is then lifted to a height of 2.5 m, where aeration is done using solar energy.

After aeration, treated water is stored in the storage tank from where it is supplied to the farmers for irrigation.

The fly ash wastewater treatment system not only solved issues related to disposal of grey water but helped the society acquire a source of revenue. Farmers are charged Rs 100 per hour for water supply and households pay annual fees to the cooperative society.

The Gram Panchayat undertakes repair and maintenance of the community drain network once every four to five years.

The society, utilising its funds, is solely responsible for the maintenance of wastewater treatment plants.

The treatment plant works on a natural treatment system, and hence no labour is involved. The total cost incurred on the plant was Rs 30-32 lakh.

Before installation of the plant

Quality of wastewater samples before installation of water treatment plant

*All values of parameters are in mg/l except pH
Source: Lambra Kangri Multipurpose Cooperative Service Society

After installation of the plant

Quality of wastewater samples after installation of water-treatment plant

*All values of parameters are in mg/l except pH
Source: Lambda Kangri Multipurpose Cooperative Service Society