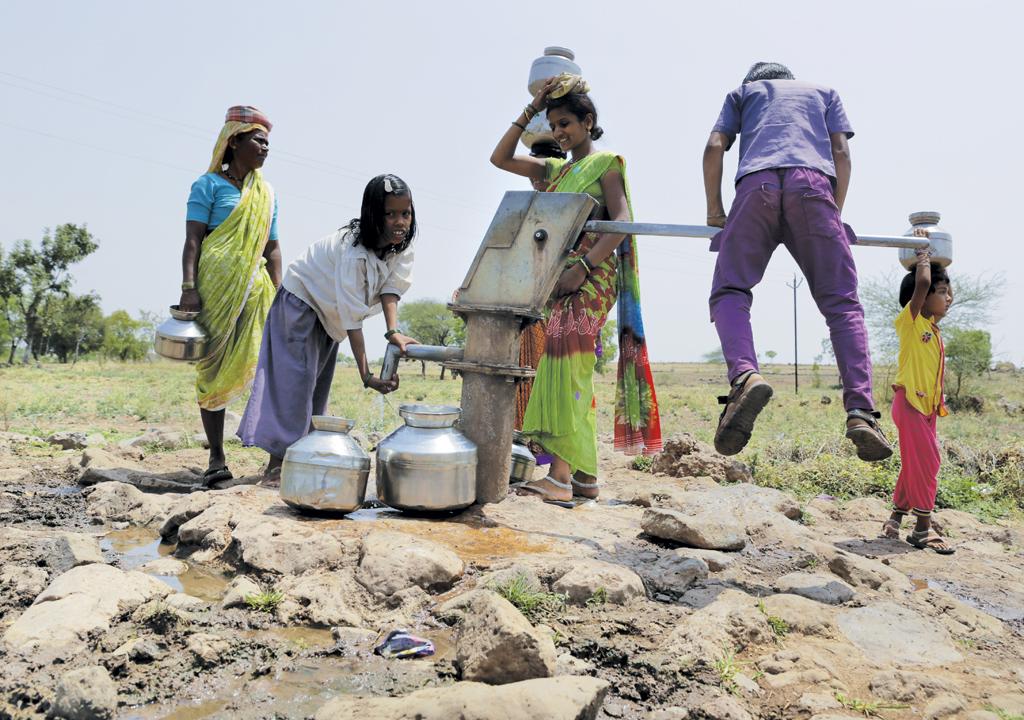 Beed, Maharashtra: People using a tube well to draw water. Between 1950 and 2010, the number of tube wells drilled in India increased from 1 million to nearly 20 million (Photo: Vikas Choudhary)

India's much sought after, and fast depleting, natural resource is up for another round of contests between users. The new proposed set of regulations for use of groundwater has led to an avalanche of debates and discussions. At the core of this is the contest between who should use it how much and what penalties to be levied for its unjudicious use. Regulating groundwater has been a very contentious debate. It can be gauged from the fact that the Union Water Resources Ministry came out with new draft rules for regulation of groundwater resources in October 2017—less than two years after the previous one in 2015—and has sent it to all the states for their response. While the states are yet to respond, experts point out at many loop-holes in the rules.

The new draft rules have been introduced to check and correct the ominous situation of groundwater depletion in India. Statistics about India’s groundwater depletion are depressing. According to a 2016 report by the Parliamentary Committee on Restructuring the Central Water Commission and the Central Ground Water Authority (CGWA), “the growing dependence on groundwater has taken the form of unsustainable over-extraction, which is lowering the water table and adversely impacting drinking water security”. In order to keep this depletion under check, the government has at least 80 “notified” areas from where groundwater can’t be extracted for other than drinking and domestic purposes.

One can withdraw water for industrial purposes only from “non-notified” areas which are further classified as “safe”, “semi-critical”, “critical” and “over-exploited” based on groundwater resources estimation. The CGWA has conducted four estimates after Independence. The last was done in 2013, the report of which was released in June 2017. In the 2013 estimate, 6,584 blocks of the country were assessed. Out of them, 1,034 were classified as over-exploited. Over 4,000 blocks are safe (see `A steady decline'). “India’s groundwater resources are under threat. Between 1950 and 2010, the number of tube wells drilled increased from 1 million to nearly 20 million,” a 2016 World Bank report says.

One of the key changes introduced in the new draft rules is that now the District Magistrates (DMs) have been given the power to grant No Objection Certificate (NOC) to an industry if it wants to extract groundwater within certain prescribed limits. Beyond that, the case will be dealt by state groundwater boards and CGWA. Earlier, only CGWA had this power. A K Gosain of IIT-Delhi’s civil engineering department says while this may be a right move towards decentralisation, the local district officials have to be scientifically-equipped before that. “She/he is only going to give permission on the basis of categorisation of areas conducted by CGWA. Last such data is of 2013. It is very old to be relied upon because the situation on ground like pre-monsoon and post-monsoon scenarios and soil quality among other factors change very dynamically.”

The provision of artificial recharge has also been discarded in the new rules. All industries extracting groundwater were supposed to take up artificial recharge of acquifers by rainwater harvesting. Instead, a compensatory fee has been introduced now. Gosain points out this may be a good move as there was no check on the quality of recharge by private proponents earlier. “There was nobody to see whether they were dumping polluted water,” he says. However, assistant professor in Delhi University’s geology department Shashank Shekhar says, “What is more important is that we should have a robust impact assessment of any groundwater recharge structure. A GIS-based portal at CGWA should at the click of a mouse give the details of the recharge structures.”

The compensatory fee will go to respective states, which, in turn will do artificial recharge. Hydrogeologist P S Datta says that no matter who is doing the recharge, it is the monitoring of the recharge which matters. “No amount of policing by the government will be effective. It is the community which can best do it,” he says. However, the new rules are silent on it. Moreover, there is no defined upper limit for extraction of water. The more you pay, the more you extract. This is alarming considering the fact that groundwater resources are already on a decline. “CGWA was supposed to undertake a study of grey areas in over-exploited blocks. At least, for such areas an upper limit should have been fixed,” says Gosain.

The government has also dispensed with the mandatory clause of reuse and recycle of extracted water. In the existing rules the minimum limit of reuse was clearly defined, the draft rules just say that the proponents shall do it and no limit has been set.

“Even if the fixed limits have been dumped, a provision of increasing the efficiency of recharged water could have been introduced,” says Gosain.

Most importantly, experts say, India has not been able to map more than 25 per cent of acquifers. “If we can’t map them, how are we going to take care of them,” he asks.

On the condition of anonymity, a scientist in the Central Ground Water Board told Down To Earth (DTE) that DMs have been allowed to give permission because many small-scale industries complained that they have to deal with many middlemen to reach CGWA. DTE tried to contact the chairman of CGWA Akhil Kumar but several attempts to reach him over phone did not yield any result. A detailed e-mail questionnaire asking for the rationale behind allowing DMs to give permission, fee structure, doing away with artificial recharge and other provisions were sent to him. However, he did not respond at the time of filing this report.

(This story was first published in the Dec 16-31 issue of Down To Earth under the headline, 'A job half done').